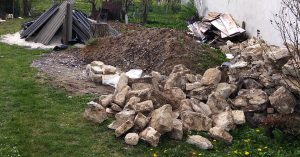 Earlier this month, a Rohatyn resident uncovered more than half a dozen Jewish headstone fragments during a DIY home repair project. As he pulled building stones and rubble from the walls of an old cellar, Oleh Yefimovych was startled to turn over seven of the removed building-block-sized pieces to see Hebrew lettering and ornamental markings typical of Jewish headstones. His immediate thought was to contact me via Facebook to bring the discovery to my attention, and to ask what to do with the stones. 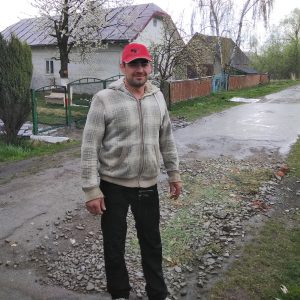 Although Jay and I are in California now following our unexpected departure last month from Ukraine due to the coronavirus pandemic, I relayed Oleh’s message to Vasyl Yuzyshyn, our friend in the Lviv area and a long-time core member of the Rohatyn Jewish Heritage volunteer team. Vasyl already had plans of traveling to Rohatyn today to check on the status of the Jewish heritage sites during our absence; he planned to visit both cemeteries and both wartime mass graves. Vasyl was happy to help and immediately telephoned Oleh; the two arranged to meet during Vasyl’s visit. 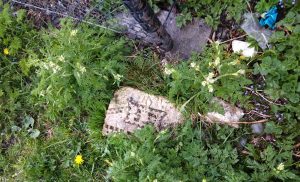 The lone fragment on an adjacent street. Photo © 2020 Vasyl Yuzyshyn.

Today, while they were loading the fragments into Vasyl’s van under a rainy sky, Oleh told Vasyl about a single headstone fragment he had been alerted to on a residential street not far from Oleh’s place, and together they also recovered that stone. Vasyl then took all eight fragments to Rohatyn’s old Jewish cemetery, where they are now safe with the hundreds of others recovered over the past nine years.

It is often thanks to Rohatyn residents like Oleh that we learn about Jewish headstones outside the Jewish cemeteries. Oleh was disturbed when the headstones were uncovered during his renovation work, and sought to return them to an appropriate place. By contacting us promptly, he demonstrated yet again that there are many in Rohatyn today who care about the city’s history and heritage, including its Jewish heritage. 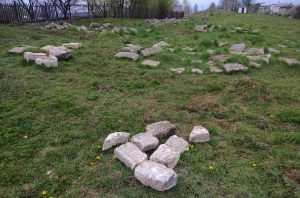 The newly-recovered stones now with others at the old cemetery. Photo © 2020 Vasyl Yuzyshyn.

Rohatyn Jewish Heritage depends upon the support and activism of Rohatyn residents like Oleh and Ukrainian friends like Vasyl. During this period of COVID-19 when we cannot be in western Ukraine continuing our work in Rohatyn, these relationships are especially dear to us, and essential. Дуже дякуємо!