A Visitor to Rohatyn: Rav Gabai

Jeremy Borovitz reported to me yesterday that he had heard from Abram Lyons, the Peace Corps volunteer currently serving in Rohatyn; Abe related some events of the day and forwarded several photos. 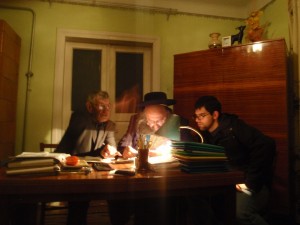 Abe had been contacted the previous day by Rav Israel Meir Gabai, director of Agudas Ohalei Tzadikim (the organization which had built the ohel in Rohatyn’s old Jewish cemetery, as reported here in April). At the time, Abe did not know what he wanted, but Rav Gabai arrived about 9pm and together they proceeded to Mr. Vorobets’ house. Mr. Vorobets and the Rabbi spoke for some time about the Jewish history of Rohatyn, and some time later Abe learned why Rav Gabai had come to Rohatyn that evening: he had seen some images of one of the Jewish headstones we had recovered from the streets in Rohatyn on our previous visit, and had deduced that it belonged to one of the tzadikim buried in the old Jewish cemetery where his group had built the ohel. 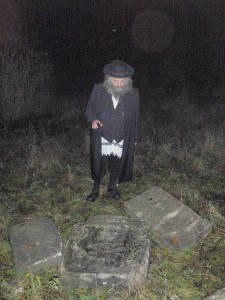 Rav Gabai concluded his discussion with Mr. Vorobets, and together with Abe went to Rohatyn’s new Jewish cemetery, where the headstones had been moved just days earlier. Abe reports that it was interesting for him to watch Rav Gabai work, as he was very familiar with the symbols and phrases on many of the fragments, so he could identify some characteristics of many of those memorialized. Eventually Rav Gabai located the stone he was seeking, and he gave Abe instructions to have that stone moved to the old Jewish cemetery and placed inside the ohel. Abe promised to coordinate that work with Mr. Vorobets the next day.

This marks one of the first times where we have had a stone positively linked to a known person from the Jewish community of Rohatyn, and the first tzadik.