As promised, here is a report of our visit yesterday to Rohatyn.

By separate post, Jay will report on the new headstones discovered and recovered since our last visit in June as well as the status of the memorial project at the Jewish cemetery. 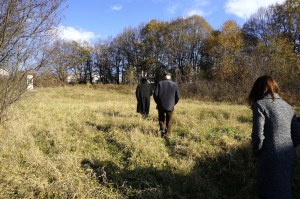 With Rabbi Kolesnik and Mr. Vorobets near the burial site in the new Jewish cemetery. Photo © 2014 Jay Osborn.

Jay and I were accompanied as usual by group member Alex Denysenko (who also made our transportation arrangements), as well as Andrij Bojarov of Lviv.  We were met in Rohatyn by Rabbi Moshe Leib Kolesnik of nearby Ivano-Frankivsk.  Together we picked up Mr. Vorobets, who spent the entire day with us.

With Mr. Vorobets’ assistance, we identified a local business to create from our design a stone memorial to be placed at the site in the new Jewish cemetery where 12 human remains were laid to rest last December 2013.  Please see my past posts if you are unfamiliar with this unexpected and unsettling discovery in Spring 2012, or read the article I wrote about it for Jewish Heritage Europe:
http://www.jewish-heritage-europe.eu/focus/projects/rohatyn-ukraine-jewish-headstones-human-remains-where-to-go-from-here

The stone memorial will be made of concrete and stand approximately a meter high.  It will have two plaques on the front side with the following inscription, one in Ukrainian and one in English:

The remains of 12 individuals, discovered in a cavity below the Church of the Nativity of the Theotokos in Rohatyn, and believed to be Jews who died in town during World War II, were buried here in December 2013, with respect, by representatives of the church of Rohatyn and the synagogue of Ivano-Frankivsk.

Thanks to Alex Den for making the Ukrainian translation, bringing this emotional and important project one step closer to completion. Jay and I left a deposit with Mr. Vorobets to be applied to the creation and construction of the stone memorial. It is our hope that it will be completed and installed by the time of our next visit, likely in late summer for Rohatyn’s “birthday” events planned by the City.