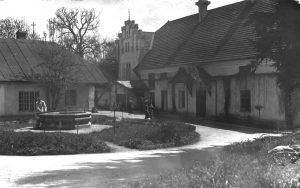 The building which will house the new museum, in a WWI-era postcard photo. Source: Rohatyn District Research Group (RDRG).

We learned this morning that the City of Rohatyn has already made progress on their plans for a new local history museum, which they told us about in our meeting with them in May. According to a 09Jun2016 report in the regional news outlet Vikna (Windows), the new site will be at a complex of buildings south of the city center, in a location that once included a manor house. 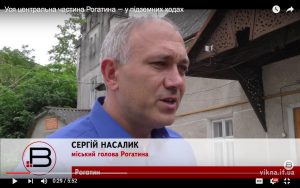 Rohatyn’s Mayor Sergij Nasalyk says the building has already been cleared of equipment and utilities associated with its previous purpose, and repairs to the building are in progress, including the addition of heating. He anticipated that the museum could become operational within two months.

The news report describes Rohatyn as “a city of great contrasts and terrible secrets”, including the murder of thousands of Jews from Rohatyn and the area during World War II. A highlight of the video accompanying the news article is the legendary tunnel network under the city center, purported to be used as a hiding place for Jews during the German occupation of the city, and connected to the 2012 discovery under the Ukrainian Catholic church of the bones of a dozen individuals, probably Jewish, believed to have died during the war – and subsequently buried by Rohatyn’s Father Bihun and Rabbi Kolesnik of nearby Ivano Frankivsk, and then memorialized with the assistance of our program. 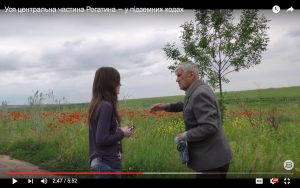 In the report, Mayor Nasalyk considers that the legend of the tunnels may become a feature of the local history museum which could attract tourists from the region and beyond. The city is currently considering development of one of the tunnel entrances still accessible in town, and is researching the history of their creation and use. Our local contact (and regional historian) Mikhailo Vorobets is interviewed by the Vikna reporter about the events of World War II which linked the Jews to the tunnels.

For our part, we would welcome an opportunity to include the 500-year history of the Jews of Rohatyn in the overall timeline and development of the city as part of the museum’s exhibitions and resources. Beyond the dramatic and tragic events of World War II, we would like to see information about the pre-war life of the Rohatyn Jewish community, both within their own circles and integrated with the other ethnic groups in town, accessible to museum visitors and students. We will contact the Mayor’s office to inquire how we can help.

The video from the Vikna article is below: