In a two-part article published 15 and 23July2016 by Olga Verbiana of Rohatyn in Газета Голос Опілля (The Voice of Opillia), a Ukrainian newspaper of the Rohatyn-Berezhany-Pidhaitsi region, it was reported that a large number Jewish headstone fragments were recently uncovered during street work on vul. Drahomanova southwest of the town center. Rohatyn retired school teacher Mikhailo Vorobets, our ally and partner in town, provided the details of the recovery; the article was then brought to our attention through Facebook by another resident of Rohatyn, Svitlana Roskosh.

We contacted Olga and learned that headstones were found not only at vul. Drahomanova but also under vul. Zavoda, across the Hnyla Lypa river. We visited both areas with Mr. Vorobets during our May 2016 visit to Rohatyn, and both have yielded Jewish headstone fragments in past years. Mr. Vorobets anticipates that they will continue to yield matzevot as utilities, roads and pavements are upgraded by the city in the next years.

In total about 50 matzevot were uncovered this month, among them one of red sandstone, fully intact and weighing an estimated 350~400 kilograms. A translation of the carved Hebrew text on the beautiful pink stone by members of the Rohatyn District Research Group (RDRG) this week tells us whose stone it is: 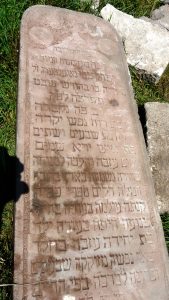 Chana, daughter of the esteemed deceased,
our exceptional teacher Yitzchak Tzvi Nagelberg,
may his memory be for a blessing,
passed away on the 26th of the month of Shevat 5695 [1935]

The inscription goes on to describe Chana in poetic text, with the first letter of each line spelling out her name:

wise of heart, buried here
humble, dear soul
was 75
daughter of a G-d fearing man
departed and left for her [eternal] rest
[may] her soul be bound in the blessed land
had mercy on the poor with the fruit of her hand
acquired her [portion of] the world [to come] while still alive
modest even while still a girl
an only girl, left them bereft
her soul left her purified 7 fold
may her memory be blessed among those that live

Given the red sandstone material of the stone and the 1935 date of her death, we guess the woman was buried at Rohatyn’s new Jewish cemetery which had opened in the 1920s. Today there are several similar large red sandstone headstones still in situ at that cemetery, located at the north end of town.

Olga sent us 24 excellent photographs of the matzevot, now all recovered to the old Jewish cemetery in keeping with the plan proposed by Rabbi Kolesnik of Ivano-Frankivsk; we will aim to take additional photographs documenting the stones on our next visit to Rohatyn, on 06 September. We are grateful to Olga, Svitlana, Mr. Vorobets, the Rohatyn city staff, and local citizens for recovering these stones and for alerting us to their discovery.

Past news reports on this site have described other recovery work on vul. Drahomanova and vul. Zavoda, in May 2016, April 2013, and May 2011. To read more about this lead project in our Rohatyn Jewish Heritage program, see the Jewish Headstone Recovery Project page.

Our map of headstone recovery locations from the past five years is shown below. We’ll update the map in September to include the stones recovered this month from vul. Drahomanova and vul. Zavoda, once we have seen exactly where the stones were found. You can use this map to see other locations on those streets which have yielded stones in past years:

Update 30Jul2016: An excellent article about the recovery of these headstones and our project in Rohatyn was published today in the online regional newspaper Газета Вікна (Window); the article quotes extensively from our news report, and includes the outstanding photos by Olga Verbiana. We are very happy to see such great coverage of this Jewish heritage project in Rohatyn.