I just wanted to give you a brief summary of yesterday’s visit to Rohatyn – there were 7 of us: me, Jay, Alex Feller, and Mitchell & Dori Glotzer, along with Alex Denysenko and his driver Vitaly.  We left Lviv around 9:00 a.m. and returned home just after midnight.

Hundreds more photos were taken by our group, including several by Mitchell after dark at the memorial to the 1942 aktion and at the north-end “old” Jewish cemetery – I am sure everyone will be especially moved by these.  Links to the various photos will be shared by Jay, Alex, and Mitchell once they have been sorted and posted.  And I know that Alex and Mitchell also want to share with you their impressions and feelings about this very, very full, emotional day, which, for Mitchell, was his first visit to Rohatyn, the boyhood home of his father, Kuba Glotzer. 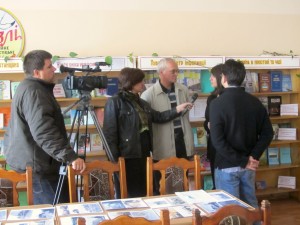 A few other details……

An interview to Ukrainian TV was given by me and Alex F, with Alex D acting as translator.  The topic the TV station was specifically interested in covering was our group’s latest project of identifying Jewish headstones (and pieces) around town and arranging for them to be removed and transported to the former “new” Jewish cemetery at the north end of Rohatyn. [Video of the Ukrainian TV interview is available in a separate report a few days later.]

By the way, 3 more headstones were found on our walk around town with Mr. Vorobets, brought to his attention by passers-by.  We took 4 small ones to the cemetery ourselves in Vitaly’s van.  Ihor at the library (who arranged the TV interview and made library facilities available for this purpose) was present in the morning and during our subsequent meeting with Mr. Vorobets.  At that meeting we created a fund to cover expenses that will be incurred in this project, and introduced Alex D and Mr. Vorobets – Alex has agreed to act as our group’s representative and contact person for Mr. Vorobets, Ihor, and the Rohatyn Mayor, to the extent issues come up after we have left Ukraine.  Thank you, Alex.

Headstone cleaning by Alex and locals, and our transport. Photos © 2011 Jay Osborn. 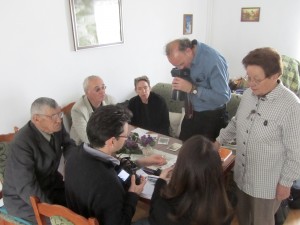 On our walk with Mr. Vorobets, we were also invited into the home of the woman named Daria that me, Jay, and Alex met on our visit last week – the one whose family remained in contact with Sabina Fuks after the War.  Daria (and her husband) were very gracious and hospitable and shared numerous family photos and more letters with us.  She also accompanied us on our walk to see the newly-found headstones.  She has turned out to be an important source and keen spotter of these fragments and will continue to be.  We are all very grateful for her energy and commitment to help with this project.

A suspect stepping stone turns out to be a Jewish headstone. Photos © 2011 Jay Osborn.

We ran out of time to shoot headstones already at the north-end [new] cemetery and to thoroughly pick up trash in an around the site.

Here is the link to the photos we have posted online from the trip:
http://www.pbase.com/nuthatch/ua_2011_rohatyn_t
If you click on the individual pictures, they will enlarge and you can print them.

Jay and I will likely make one more visit to Rohatyn before we leave Ukraine 16 June.  The French documentary filmmaker, Renaud Lavergne, may or may not accompany us, depending on his schedule.  We will keep you posted when that gets planned.

Tomorrow, Alex F flies home; we catch a 6:30 a.m. train with Mitchell & Dori to Kiev for some much-needed rest and relaxation!