The interview with Alex Feller and Marla Raucher Osborn for Ukrainian TV news, conducted in the Rohatyn town library on 17May2011 (as described in an earlier report) is now available on YouTube on the Rohatyn library’s channel. Alex Denysenko provided language interpretation during the interview; Ihor Klishch, Yefim Kogan and I created the English subtitles in the YouTube version. 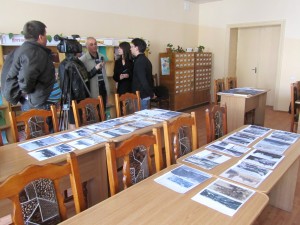 The TV interview proceeds, with many photos and maps brought by Alex Feller. Photo © 2011 Jay Osborn.

Today, Alex Feller gave a good description of the interview:
Marla and I discussed the creation of our group and its purpose and goals.  We mentioned the scope of our members and the variability in time periods that different members are interested.  We discussed that although we are interested in the Holocaust and events that occured in Rohatyn, we are very much interested in the whole history of Rohatyn and its surroundings. We talked about the current project to recover Jewish headstones that are found outside of the Jewish cemeteries.  We gave thanks to those helped us in this endeavor.  We appealed to locals to help locate headstones and notify Mr. Vorobets if one is found. Prior to the interview, I laid out printed copies of postcards of Rohatyn during and around World War One, plus the aerial photo in which they were particularly interested.

Alex Denysenko also offered two comments:
There is a little mistake in the presentation, showing Alex Feller as Jay Osborn. They, in fact, did a good dubbing.

Here is the video; if English subtitles are not running when the video starts, click the CC menu at the bottom of the video and select English: