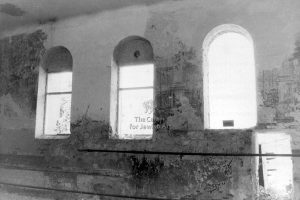 Decorative painted scenes on an exterior wall of the Rohatyn beit midrash, from 1994. Photo © the Center for Jewish Art.

Yesterday there was a news posting on the Jewish Heritage Europe website and Facebook page about a conference on synagogue wall paintings to be held next month in Jerusalem. The conference is organized by the Center for Jewish Art (CJA) at Hebrew University, and spans two days with expert sessions on issues of research, preservation, and presentation of synagogue murals in Europe, the Americas, and Israel.

A highlight of the conference is the launch of CJA’s new Catalogue of Wall Paintings in Central and East European Synagogues, a database project to present information on and images of synagogue wall paintings gathered by CJA between 1994 and 2015, from both surviving and lost synagogues. The project is ongoing, with a forecast completion by February 2017, but already there is a wealth of data and imagery available for browsing and research. 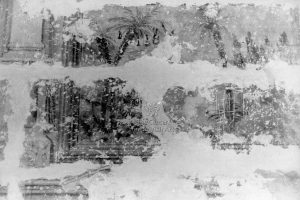 A Mediterranean landscape painted on a wall of the Rohatyn beit midrash, from 1994. Photo © the Center for Jewish Art.

To date the catalog documents almost 150 synagogues in 10 European countries; Ukraine currently has 20 synagogues in the database, and browsing the site today we were startled to see an entry for Rohatyn. In 1994 the CJA collected one exterior and nine interior photographs of the building we know as the former beit midrash on vul. Valova (situated adjacent to the Great Synagogue of Rohatyn which was destroyed in World War II). Some records list this building as a synagogue, and it may well have served both prayer and learning purposes.

The images are in black & white, and rather dark, but what they show is striking: painted architectural elements of columns and temples alternate with depictions of draperies, tassels, and urns; the foreground features are set against a backdrop of Mediterranean or Middle Eastern vegetation (palms), probably representing the Holy Land, perhaps Jerusalem. It appears that the murals covered all four walls, including between, above, and below the arched windows on the exterior walls. By 1994 the wall paintings were already significantly damaged by water, wear, and masonry repairs, but what remained was clue enough to the former glory of the space. 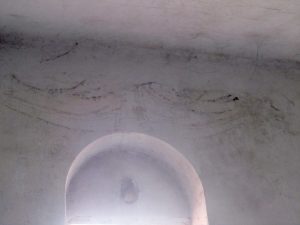 A view from our visit in 2011: faint images from the murals are visible through later paint. Photo © Jay Osborn.

When we visited the beit midrash in 2011, the scene was different; the walls had been whitewashed sometime after 1994, and only faint shadows of the original paintings were visible in a few places. City officials and locals pointed to the clues to highlight that the murals may still be recoverable under the more recent paint.

These newly-published images from newly-independent Ukraine are an important record of the past life of the building. We have updated our project page on Rohatyn synagogues documentation, and will continue to monitor the building for preservation opportunities in the future.