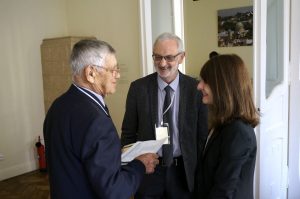 Rohatyn Jewish Heritage had the great opportunity to participate with Mikhailo Vorobets in a workshop today in Lviv, discussing our projects aimed at preserving Jewish heritage and memory in Rohatyn. The workshop, entitled “Mapping Presence: Jewish Heritage Sites, Initiatives, and Experiences in Ukraine“, brought together more than a dozen practitioners and experts from several countries including Ukraine, Hungary, and Israel, and a many more interested listeners.

The workshop was part of a series of events surrounding the opening of The Space of Synagogues, a long-term program of Jewish heritage projects in Lviv jointly developed by the Lviv City Council, the Center for Urban History of East Central Europe, and GIZ GmbH, with the support of the Lviv Jewish community, Lviv Jewish descendant groups in Israel and America, the embassies of Germany and Israel, and many local artists, artisans, engineers, and scientists. The events were an element of this year’s European Days of Jewish Culture, in which Ukraine was a participant. 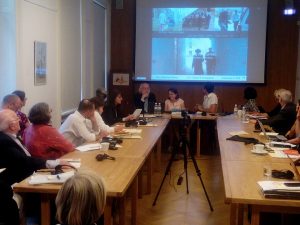 Organized and hosted by the Center for Urban History, the workshop’s aims were to map diverse experiences, formats, stakeholders, actors and motivations, and to contribute to growing awareness of Jewish history and heritage as a part of history and heritage fields in Ukraine. By learning about and discussing separate projects together, the organizers hope to establish dialogue and identify further directions for preservation, visibility and future engagement with Jewish heritage. The workshop was valuable to us by giving us the perspectives of other activists with projects like ours, and also those of academics and artists with other ways of thinking about and expressing their ideas on these topics. 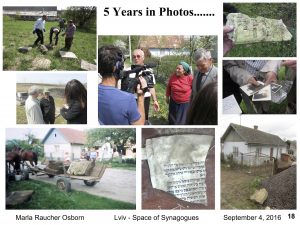 A sample slide from the visual portion of our presentation.

Our presentation was part of the first thematic panel, “From Traces to Presence: Making Jewish Heritage Visible“, which also included presentations on Jewish heritage preservation efforts in Ostroh, Dobromil, and a second Jewish heritage site intended for commemoration in Lviv. I gave an overview of our projects and our current progress and status, highlighting as priorities for 2017 the continuation of headstone recovery work and the non-invasive archaeological survey of Rohatyn’s Jewish mass grave sites, as well as our germinal project of collaboration with Rohatyn teachers and museum directors on education projects. I showed 33 slides covering the range of our program’s planned and unexpected activities over the past five years. 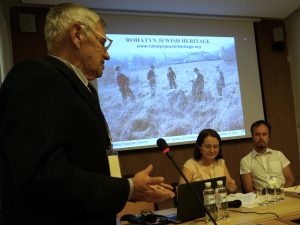 With one of Marla’s slides in the background, Mr. Vorobets delivers his presentation. Photo © 2016 Jay Osborn.

For his part, Mr. Vorobets spoke about his 58-year career as a teacher in Rohatyn, his personal love of history, his childhood memories at age 6 seeing with his father the horrors of the southern mass grave a few days after the liquidation of the Jewish ghetto in Rohatyn, an event that marked him for life and contributed to his motivation to help preserve Rohatyn’s Jewish history and heritage. Mr. Vorobets also presented the best wishes of Rohatyn’s Mayor, Mr. Serhii Nasalyk, thanking the Urban Center for their invitation and apologizing that which he was unable to accept due to prior commitments. 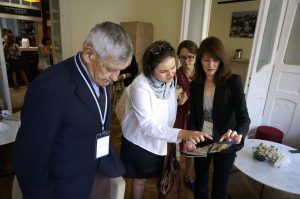 Examining the Rohatyn city brochure with Dr. Sofia Dyak, Director of the Center for Urban History in Lviv, and Mira Shlapak, one of the Center’s coordinators for the workshop. Photo © 2016 Jay Osborn. 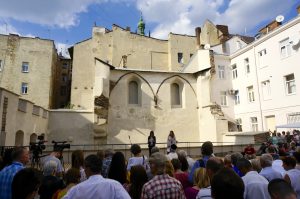 Marla speaking to the gathering at the opening of the Space of Synagogues commemoration project. Photo © 2016 Jay Osborn.

Mr. Vorobets also shared photos taken at the two mass grave sites in Rohatyn, which he has recently tended and maintained, now with beautiful summer flowers.  He also showed us a new color brochure in Ukrainian and English of the history and sights of Rohatyn; its fold-out map now shows the locations of Jewish heritage sites. This will of course be very useful for Jewish descendants and heritage tourists to the town.

As part of the workshop, Mr. Vorobets attended the afternoon’s opening ceremony of the Space of Synagogues commemoration project at the conserved ruins of Lviv’s Golden Rose synagogue, presented by Lviv’s Mayor and staff, several city council members, members of the city’s Jewish community, Jewish descendants of Lviv families from Israel and America, and foreign dignitaries and ambassadors. 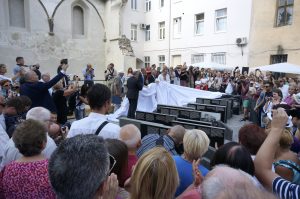 Lviv’s Mayor Sodovyi and others unveil the Perpetuation Memorial at the site. Photo © 2016 Jay Osborn.

We express our sincere gratitude to our friends and colleagues at the Center for Urban History in Lviv for this opportunity to attend the day’s important events and to participate in the day’s workshop to discuss our projects with experts and others also working on heritage projects in Ukraine.  A special thank-you to the Center’s Director Sofia Dyak and her staff for making all the arrangements for Mr. Vorobets to enable his participation, and providing his transportation to and from Rohatyn. 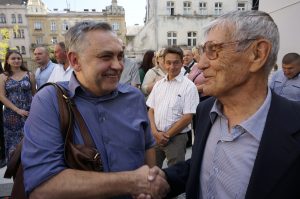 Meeting friends at the site: Artists and artisans Andrij Bojarov and Lev Triska, who have contributed concepts for design and materials of our cemetery rehabilitation, with Mr. Vorobets. Photo © 2016 Jay Osborn.