With the field work for the mass grave survey behind us, we returned to Rohatyn for a short visit today to get a tour of the Opillya Museum, the regional cultural history museum which will open later this summer. We met with the museum’s director Olha Blaha-Maletska and deputy director Vasyl Serdyuk at City Hall, and then walked to the museum, where they graciously showed us around the developing space. The historic building is a few minutes south of town center, set back off vul. Halytska. According to Olha, the building likely dates from the late 19th century to early 20th century; during World War II it served as a military transit prison and court. We were joined at the museum by Roman, who is responsible for the design of the exhibition space. 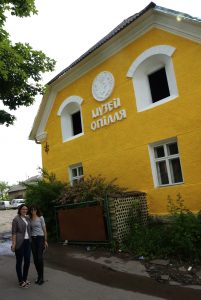 Olha and Marla at the street front of the new museum. Photo © 2017 Jay Osborn.

The exterior of the building now has a new coat of bright yellow paint and signage. The interior is nearing the end of finish work, and workers are beginning to install display cabinets and exhibition frames. There are four rooms and two wide corridors intended for exhibitions on the ground floor; each is well illuminated by natural lighting from the windows. Ceiling heights reach to about 10 feet (3m), giving an open feel to the spaces. There will also be a community space upstairs for films and seminars, an important component of modern museums.

The museum is focusing its exhibition themes on histories of the people who have lived in the Opillya upland area around Rohatyn, roughly equivalent to today’s Rohatyn District, including Rohatyn plus other towns and villages familiar to people with roots in the region: Cherche, Stratyn, Pukiv, Lopushnia, Chesnyky, etc. The rooms will highlight archaeological finds in the area; the 18th, 19th, and 20th centuries; and the several ethnic groups (Ukrainian, Polish, Jewish, Turkish) who established communities together in the region or otherwise left a lasting impact.

Discussion at City Hall with the directors of the Opillya Museum and our driver/interpreter Vasyl. Photos © 2017 Marla Raucher Osborn.

In several meetings with the City about the museum during the past year, Rohatyn Jewish Heritage has been invited to contribute images, materials, and text to aid assembly of the Jewish narrative in these rooms. The purpose of today’s meeting was for us to learn practical details about the size of the space and how to integrate the materials we have available with the developing museum exhibition design. We hope to assemble useful and representative information about Rohatyn’s Jewish families and prewar Jewish culture in time for the museum opening, with the involvement from members of the Rohatyn District Research Group (RDRG), and to expand and refine the exhibition materials during the coming years. 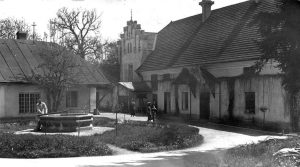 An early photo of the new museum site, ca. WWI. Photo courtesy of the RDRG.

Until 1939, Jews comprised almost one third of Rohatyn’s population, and nearly 80% of the businesses then on the market square were Jewish-owned. Rohatyn has a long and rich multi-ethnic past, of which the City is proud and hopes to share with visitors and local residents. Rohatyn Jewish Heritage is honored to be associated with the celebration of this rich history through the new Museum.

Here is a recent YouTube video by the City of Rohatyn on the Opillya Museum, interviewing its Director (in Ukrainian):