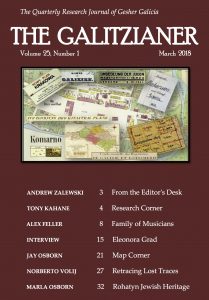 The Jewish genealogy research organization focused on the former Austrian crownland of Galicia, Gesher Galicia, has dedicated the entire March 2018 edition of their quarterly journal The Galitzianer to the people and places of Rohatyn. And, very fortunately for us and anyone with an interest in Rohatyn, Gesher Galicia has generously allowed us to present the complete edition of the journal for free viewing on our website (here and on our media page):

The journal’s executive editor, Andrew Zalewski, introduces this special edition with an essay touching on Rohatyn’s multiethnic past, the long history of Jewish life in the town, the similarity of its features and concerns to other, better-known towns with large Jewish populations – and also to his own family’s roots (and stories) in Rohatyn. Other contributors who are Rohatyn descendants or who have connections to the town include:

The edition is rounded out by a special research review article by Gesher Galicia’s board chair and research coordinator, Tony Kahane, on the archive holdings relevant to Rohatyn (and more than a dozen nearby towns and villages) in Ukrainian and Polish state historical archives – including thousands of new vital records made available just last year.

Gesher Galicia, “The Bridge to Galicia”, is a non-profit organization which began in 1993 as a special interest group (SIG) of the JewishGen electronic bulletin board; JewishGen has become a large internet site with databases, resources, and guides to Jewish genealogy research all over the world. Now in its 25th year, Gesher Galicia’s particular focus on the unusual and rapidly-evolving multicultural region of east-central Europe has attracted fans and volunteers who have inventoried and indexed documents; built databases and search engines (with access to over half a million records); mapped and analyzed family, religious, and government history; and written extensively on topics both broad and deep. Gesher Galicia is a membership organization; the small annual dues give its members access to a network of linked researchers, specialty databases, to new editions of its journal The Galitzianer, and to the rich archive of its past journal editions . 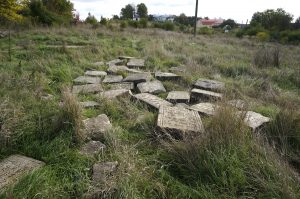 Collaboration between Gesher Galicia and Rohatyn Jewish descendants began with the founding of the Rohatyn District Research Group (RDRG) by Alex Feller almost a decade ago. Rohatyners began submitting articles to The Galitzianer in 2011, including both Alex and me, and the RDRG attracted the interest of the late Gesher Galicia president Pamela Weisberger and other board members. Collective donations from RDRG members funded targeted research by Gesher Galicia and its volunteers and contractors into unusual Rohatyn historical records. Over time, cooperation increased, and a number of Rohatyners have served on the Gesher Galicia board of directors – several still do – and in other volunteer roles; my husband Jay continues to volunteer as coordinator of the Gesher Galicia Map Room and in other map-related research efforts with Gesher Galicia’s officers and board.

My own volunteer service with Gesher Galicia changed when I stepped down from their board in order to begin working for the Foundation for the Preservation of Jewish Heritage in Poland in early 2015. By that time Jay and I had already been engaged with Jewish heritage preservation in Rohatyn for several years, and I began serving Gesher Galicia as an advisor on heritage issues in the region; that service continues today. My article for the March 2018 edition of The Galitzianer updates the status of our project in Rohatyn from an earlier article in the June 2016 edition, and highlights the important link between family history and the heritage of the places where they lived.

Gesher Galicia continues to serve as a US-tax-deductible donations collector for Rohatyn Jewish Heritage, and as a partner and colleague on many history-based projects.

Speaking for ourselves and for Rohatyn Jewish Heritage, we thank Andrew Zalewski and Ann Gleich Harris for their hard work in editing and assembling this special Rohatyn issue of The Galitzianer, Shelley Kellerman Pollero for her ongoing management of donations, and all of the board of Gesher Galicia for their continued support of the large and active Rohatyn Jewish descendant community.