“A Key To The City” Awarded to Rohatyn Jewish Heritage 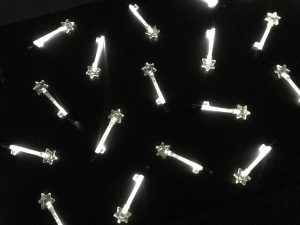 A glimpse of the original art installation by Rachel Stevens. Photo © 2018 Jay Osborn.

Today in Lviv, as part of the European Days of Jewish Culture, Rohatyn Jewish Heritage was honored among other friends and colleagues in a ceremony at the office of the Lviv City Council. The event was timed with the closing of an art and memory installation entitled “A Key To The City” created last May by professor, artist, and Fulbright scholar Rachel Stevens, exhibited at the Center For Urban History of East Central Europe. The Mayor of Lviv, Andriy Sadovyi, opened the two-hour ceremony recognizing organizations and individuals active in supporting Jewish culture and communities in western Ukraine or working on projects of memory recovery and heritage preservation. We were very proud to be both a participant and an award recipient in this event.

Co-organized by the new Memorial Museum of Totalitarian Regimes, “Territory of Terror” (Територія Терору), the Center For Urban History of East Central Europe, Hesed-Arieh, and the City of Lviv, among others, the ceremony was part of a larger program of events running through the summer in Lviv, commemorating the 75th anniversary of the liquidation of the wartime Janowska labor camp and the destruction of Lviv’s Jewish community. 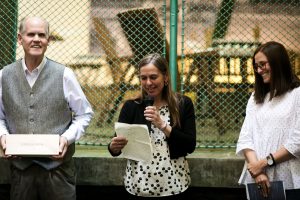 Rachel Stevens speaking at the opening of her art installation, with Jack Wright and Iryna Matsevko. Photo © 2018 Center for Urban History.

Working with Rachel Stevens, seventy-five recipients were identified over the summer to receive glass keys replicated from an iron key with a Star of David purchased by Rachel early in the year at Lviv’s Vernissage folk market; the keys were illuminated to create the core of her sculpture installation and were now boxed and presented as awards of recognition. In keeping with the custom of presenting a symbolic key to an honored person, recipients were named individually and presented with a glass key. Among the presenters were Mayor Sadovyi, Deputy Mayor Andrij Moskalenko, Ada Dianova (Director of All-Ukrainian Jewish Charitable Foundation “Hesed-Arieh”), Sofia Dyak (Director of the Center For Urban History), and me (as CEO of Rohatyn Jewish Heritage, a partner in the event). Several of the presenters and their organizations had worked with Rachel over the course of her intensive five months in Lviv to support the realization of her project. Rachel, who returned with her husband Jack to her teaching post in the U.S. in June and thus could not make the event, appeared in a video shown at the start of the event, explaining her project and the symbolism of the keys and the glass material, and thanking those who contributed and those who were being recognized. 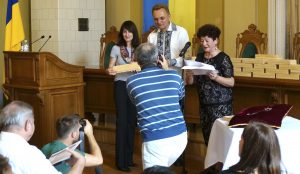 The symbolism of the award and the event was very powerful; I was quite moved to receive a key from Mayor Sadovyi and Ada Dianova, and I am sure all of the recipients were equally touched.

I was asked to introduce the following award recipients, most quietly working in their local communities recovering Jewish memory, or outside Ukraine returning memory to the scattered and often distant Jewish diaspora. Each recipient in his, her, or its own way is giving back part of what has been lost over the last 75 years and building a better understanding of eastern Galicia’s long and rich Jewish past:

The full list of award recipients was published on the news website of the Lviv City Council. Not all of the key recipients could be in Lviv today; their awards will be forwarded to them by the event organizers.

Before leaving Lviv in June, Rachel gifted the original iron key which was the source for the replicas to All-Ukrainian Jewish Charitable Foundation “Hesed-Arieh” for display in their on-site museum. 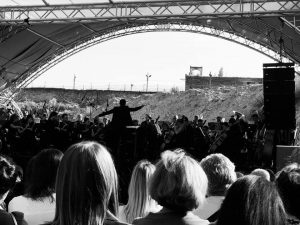 The concert in progress at the former Janowska camp. Photo © 2018 Anne Urech.

Following the two-hour award ceremony, buses arranged by the City of Lviv took attendees to the memorial site of the former Janowska labor camp, where new informational signs were unveiled, speeches were made, and an outdoor classical music concert was held: the first and third movements of Gustav Mahler’s Symphony No. 6, called “Tragic”. Afterward, the buses returned attendees to the town center for a second outdoor concert at the Space of Synagogues, the site of the destroyed Golden Rose synagogue which was commemorated and re-opened at a ceremony we attended in September 2016.

Rohatyn Jewish Heritage is proud to have been asked to nominate individuals working on the ground to preserve Jewish memory in western Ukraine (historic eastern Galicia). We are also very honored to be an award recipient for our work in Rohatyn, now in its seventh year, as well as an official partner of the event. I would like to give special thanks to Rachel Stevens, and to our friends at the Center For Urban History: Harald Binder, Sofia, Dyak, and Iryna Matsevko. For more information about the event, see the Center’s news page.

Additional coverage of the event and its context was provided on the internet news portal of the Associated Press (AP) and the news section of Jewish Heritage Europe. The AP article has now also been carried by several other news outlets including Israel’s Ynet (in Hebrew).