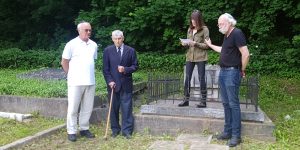 An emotional moment during the prayer.
Photo © 2019 Sonia Engström.

Today, Jay and I returned with friends to Rohatyn to recite a prayer at the “vodokanal” wartime Jewish mass grave (north of Rohatyn town center), on behalf of Rohatyn Jewish Heritage and Jewish descendants of towns and villages in the district now living around the world. 76 years ago, over a period of three or so days, the Jewish ghetto in Rohatyn was liquidated. The more than 3000 victims of this final “aktion” included a small number of original Jewish Rohatyn residents who had survived the March 1942 aktion and subsequent round-ups and transport to Bełżec, plus many more Jews who had been brought to the Rohatyn ghetto from the surrounding region including from Burshtyn, Khodoriv, and Bukachivtsi.

We recited the memorial prayer El Malei Rachamim (אֵל מָלֵא רַחֲמִים, “God, full of mercy”) for the souls of the departed martyrs. 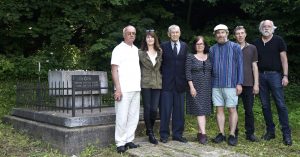 Joining us on this sad and solemn occasion were friends from Lviv and Rohatyn, including Mykhailo Vorobets, a long-time supporter of Rohatyn Jewish Heritage, local historian, and Rohatyn resident. For more than 25 years, Mr. Vorobets has been personally caring for the vodokanal memorials (as well as the memorials at the Jewish mass grave south of city center), planting at each season lovely flowers and shrubs and from time to time weeding around the memorials, in memory of the victims and for the benefit of foreign Jewish visitors and Rohatyn residents. At 85 years old, these activities unfortunately ceased last year due to his age and health issues, some requiring short-term hospitalization. Mr. Vorobets, a widow, also cares for a disabled daughter, whose needs last year on this date prevented him from joining us at this site for a ceremony. It was therefore especially meaningful for us to have him here at this year’s event. 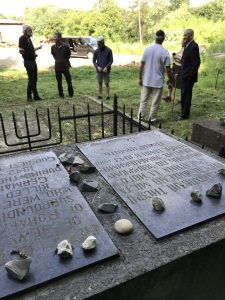 Jay and I also wish to thank our Lviv friends Alex Denysenko, Sonia Engström, Gustav Söderström, and Vasyl Yuzyshyn for coming with us and standing witness. All four of these dear friends joined us last year when together we remembered on the 75th anniversary.

There is more information on our website about the use of the vodokanal site before, during, and after the war. The site was professionally surveyed in 2017 using non-invasive techniques to assess the boundaries of the mass graves, and again in May 2019, and it is likely that several pits were dug and used here for Jewish executions even beyond the June 1943 events.

May the memory of the victims bind us together.