One of the headstone fragments in the yard on vul. Petra Mohyla. Photo © 2019 RJH.

This morning we recovered seven Jewish headstone fragments from a residential construction site on vul. Petra Mohyla in Rohatyn, and returned them to the old Jewish cemetery in town, where we are working this week again to tame wild vegetation. The headstone fragments were discovered last week in the structure of a post-war house which is currently being dismantled. 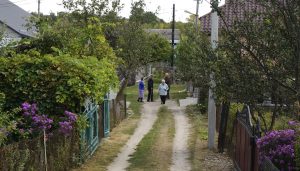 Mr. Vorobets speaking with residents of the neighborhood. Photo © 2019 RJH.

The discovery was brought to our attention via a Facebook message from Opillya Museum director Olha Maletska, after she had met with long time RJH friend and supporter Mykhailo Vorobets. Mr. Vorobets had been notified about the discovery by Oleh, the property owner who recently acquired the land and buildings. Having no email or telephone access, Mr. Vorobets told Olha about the discovery and asked her to convey the information to us. Conveniently, we already had plans of coming to Rohatyn, part of a family heritage trip with Rohatyn Jewish descendants living today in Canada and Poland. 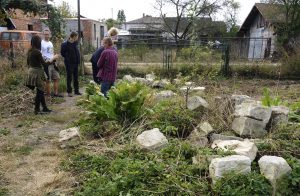 Our group’s plans to tour the Jewish heritage sites was postponed long enough for us to meet with Mr. Vorobets at his home, then accompany him to the construction site, where we met Oleh and photographed the site and some of the stones. After discussing how best to transport the stone fragments to the old Jewish cemetery, we agreed to return today with more helping hands to collect the stones, at the start of another multi-day volunteer clearing event at the cemetery. 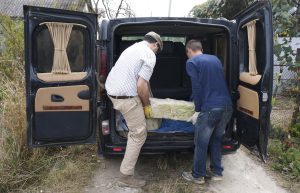 Pierre and Vasyl loading a stone into the van.
Photo © 2019 RJH.

At the old cemetery, we were helped in unloading the stones by Rohatyn’s Peace Corps Volunteer Andrés Rodriguez and his colleague Allen Gonzales-Willert from Sokal. Now the headstone fragments join hundreds of others we have collected over the past eight years. 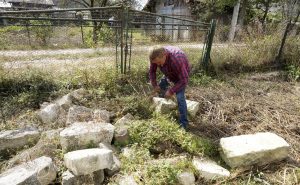 We anticipate that more headstone fragments may be discovered as the building demolition progresses. Almost exactly four years ago, Mr. Vorobets was alerted to headstone fragments discovered in a similar building project in the same neighborhood, which is a few hundred meters from the old Jewish cemetery. The young man who had discovered the headstones on his property organized a work crew to load and transfer all of the fragments to the old cemetery, in one of the largest recoveries in Rohatyn to date.

Earlier this summer, four large Jewish headstone fragments were discovered at another construction site in Rohatyn, a courtyard off of vul. Mitskevycha. This is a location which has yielded headstones on several occasions over many years; during the Nazi occupation, the courtyard served as parking for an adjacent Gestapo office. Those four headstone fragments were also recovered and returned to the old Jewish cemetery, thanks to assistance we received from the local chapter of the Ukrainian military whose office is adjacent to the site and by a residential neighbor of the old cemetery.

A few scenes from the headstone recovery work in June. Photos © 2019 RJH. 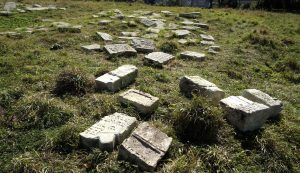 The seven newly recovered headstone fragments together in the old cemetery, with many others. Photo © 2019 RJH.

As always, we have updated the Jewish headstone recovery status map to indicate where the newly-collected stones were recovered; that interactive map is shown below and on our project page. The map now also includes mention of the occasional anonymous return of Jewish headstone fragments to the old cemetery, including twice already this year, in a quiet trend we are especially happy to see.