Jay and I returned to Lviv last night from Rohatyn and I wanted to give you a summary of our latest visit.

This was our final trip to the town this Spring – we are leaving Lviv later this coming week.  We will return to Lviv in mid-September and stay until 10 November, during which time we will probably make two more trips to Rohatyn before going on to Paris and thereafter to California for the holidays. 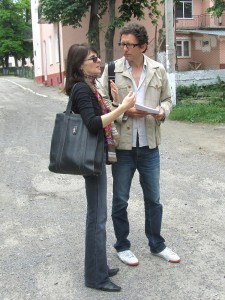 On this latest visit, we were accompanied by AFP reporter Renaud Lavergne of Marseille, France.  Renaud will be writing an article about Jews making trips from America, France, Israel, and other countries to Galicia to learn more about what life used to be like in Galician shtetls before the War and what “clues” remain of former Jewish Galician life. In August, Renaud will be returning to Galicia with the Strasbourg-based group Valiske (“in the suitcase”), which conducts heritage tours for French-speaking Jews, as part of a 26-minute film documentary being made for French television.

As with our prior four visits this year to Rohatyn, Ihor Klishch of the Rohatyn library arranged not only our hotel accommodations, but also all our meetings with Rohatyn townspeople; he also helped us as translator, volunteering nearly an entire day away from his work at the library.  As I have said before and will continue to remind, without Ihor, none of our visits to Rohatyn would have been as fruitful, meaningful, or memorable.  He has been an indispensable element and interface between us, our group, and the Rohatyn community.  Regrettably, his continued employment at the library is likely coming to an end very soon, as Ihor is interviewing elsewhere for other employment. Our group owes a lot to the generosity and goodwill shown to us by Ihor, and the Rohatyn library (again allowing us the use of Ihor and its facilities). 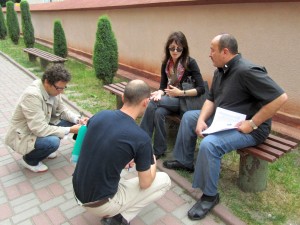 Our first stop, after joining Ihor at the library, was to meet with the head priest of the Ukrainian Church, Father Bihun, who also oversees administration of many other churches in the district around Rohatyn.  The purpose of this meeting was to present the priest with a letter we had written on behalf of our group, at the suggestion of the Mayor, explaining who we are and what we do, and requesting Father Bihun’s assistance in spreading the word about our Jewish headstone project:  namely, that anyone knowing of or finding Jewish headstones around town can contact Mr. Vorobets, who in turn would make arrangements for their removal and transportation to the new Jewish cemetery, without cost to the townspeople.  Among other things, the letter summarized our recent meeting with Rohatyn’s Mayor and his support of this project (see the prior posting of our 13-14 May Rohatyn trip with Alex Feller), as well as the interview recently done for Ukrainian TV (see posting of Rohatyn 17 May trip with Alex F., and Dori & Mitchell Glotzer). Father Bihun promised to speak to his followers about all this; he also noted that he been present at the 1998 dedication of the Jewish memorials, and emphasized the Church’s desire to cultivate and maintain good relations with Jewish people with Rohatyn roots. 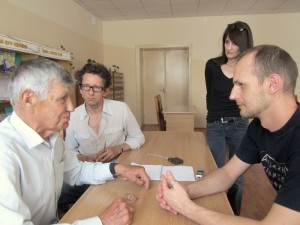 With Mr. Vorobets at the Rohatyn library. Photo © 2011 Jay Osborn.

After this, the four of us (Jay, Ihor, Renaud, and I) met Mr. Vorobets at the library, where he first reported that he had spoken with an elderly woman resident of Kotsyobynskoho street since our prior visit; she remembered that before the war the Glotzer family had lived at a house near to hers, across from what was once a bath house.  This confirms a guess from our previous visit, with the Glotzers; Mitchell had even spoken briefly with a man now living in that house.

Mr. Vorobets then presented us with an accounting of the money he had spent to-date for the removal and transport of most of the headstones from around town that had been brought to our attention on prior visits; we later counted these as 36 stones, from 7 locations.  The management of this work, local payment to workers, etc., is being handled entirely by Mr. Vorobets on a volunteer basis.  These headstones have now been placed to encircle the memorial monument at the Jewish cemetery at the north end of town.

Renaud learns about the garden on Ivan Franko Street, and the courtyard behind it. Photos © 2011 Jay Osborn.

The headstones still buried under the garden on vul. Ivan Franko (up the street from the library) will have to wait until the fall for removal, when the garden is not planted.  It is not known how many headstones exist in this garden, and the residents there said that some are especially large in size, i.e. they may be nearly intact.  We therefore expect that work at this location is likely to be quite extensive, requiring heavier equipment and greater expense for their removal and transportation, and for repairs to the garden itself.  When we are back in Lviv in a few months and return to Rohatyn, we hope to have more to report at that time on this part of the headstone project.

Next, we advised Mr. Vorobets of the recent passing of Sabina Wind Fuks.  He was visibly saddened, and promised to pass this news on to Darya, the woman we had twice met on prior visit, whose family hid Sabina during the War.

Renaud directed a few questions to Mr. Vorobets for background for his upcoming article.  Mr. Vorobets then agreed to accompany us to a couple of buildings in town into which we hoped to gain access.  These included the former synagogue in the ghetto (near the Ukrainian Church and formerly behind the Horn bakery building), and the cellar of the former Judenrat building.  We were able to get into both these buildings, as well as the former mikveh (bath house) associated with and adjacent to the synagogue – today used as a laundry.  We took photos, and although there are no visible remains today of these buildings’ Jewish past, we were very, very happy to be able to see inside them.  All these buildings today belong to the Rohatyn school for orphans and disabled children.

Inside a former synagogue, the former mikveh below, and under the former Judenrat office. Photos © 2011 Jay Osborn.

And… we made an important discovery during our visit to these buildings! Even though we had not notified the school that we hoped to see the interior of these buildings, Mr. Vorobets found the school director (a friend of his) and he took us inside.  Once inside, and although his time was pressed by prior engagements he had to keep, the director excitedly announced that he had something to show us! He left and returned a few minutes later with a box of scores of crumbling, moldy, faded, browned, stained, and brittle scraps of miscellaneous “Jewish” pieces of paper that had been found during a recent renovation of the school! These scraps ranged in size from about 1/2 inch to several inches, in varying degrees of deterioration and legibility: some appeared to be printed pages from Hebrew bibles or books; others were pieces of hand-written notes, as from notebooks; others were pieces of paper bags or business receipts; a few appeared to be ration cards or food coupons; and a few had readable surnames and signatures, such as Lichtgarn, Liebling, and Haber, to name a few; some scraps also had dates from the 1941-42 period during the ghetto and the Nazi occupation! A truly amazing, unexpected find! The director was happy to see our excitement and enthusiasm and more than willing for us to shoot photos, which we did, before needing to attend to his prior engagements. We did not have time or equipment to capture all of the papers digitally; the school director told us he could make this box available again to us on a future visit, with a little advance notice. A link to the photos we took of these various scraps is at the end of this summary.

Everyone was astonished at the contents of the box. Photos © 2011 Jay Osborn.

At the south mass grave memorial; a rainbow over the old Jewish cemetery. Photos © 2011 Jay Osborn.

We parted from Ihor and Mr. Vorobets outside the Elite Centre Hotel after another long but fulfilling day together in Rohatyn. That evening (and part of the next day), Jay and I took Renaud to the Jewish memorial sites and the two cemeteries. We saw that both memorials had been very nicely cleaned, the stones painted, grass cut, and new flowers planted and watered, thanks to the tireless efforts of Mr. Vorobets. When he dies, who will continue to do this for our lost families? I think this is a topic that should be raised and discussed by the group, before Mr. Vorobets is no longer with us. (He is 77 years old.)

We briefly saw Ihor the following morning in order to deliver a CD of old Rohatyn photos and some Yizkor book materials, which he, in turn, will share with a teacher at the local Ukrainian school who has a student writing a report on Rohatyn’s former Jewish community.  We had met this teacher the day we met with Rohatyn’s Mayor, and agreed at that time to make this CD of information for her student.

The second day we also drove to all the sites in and around town where Jewish headstones had been found, and confirmed that they all had been moved, as documented in Mr. Vorobets’ detailed accounting.

We shot photos of them at the cemetery where they are now located. We also discovered 5 more stones buried deep in the grass in the Babince area where headstones had been previously found near the creek – with Renaud’s help, we were able to move 4 of them to the cemetery ourselves, but one piece was too large, so we have asked Ihor to notify Mr. Vorobets, who will arrange to pick it up and move it.

On a final note, we are (again) looking for members willing to do translations. This time, we need help translating not only the latest Jewish headstones photographed in Rohatyn, but also the miscellaneous scraps of documents, papers, and pages shown to us on Thursday which were found in the former Jewish community buildings west of the rynek. These scraps are in Hebrew, Polish, German, and possibly also Yiddish. Even if your family’s surname is not among the handful of scraps we looked at, these traces of the past – and especially from this particular period under the occupation – are meaningful to us all. And RARE survivors.  Please contact Alex Feller if you can help.

Here is a google map of the status of the headstone project:
https://www.google.com/maps/d/viewer?mid=zMdTvgb1jom4.kN58vUnixZME&hl=en&ie=UTF8&t=h&msa=0&z=14