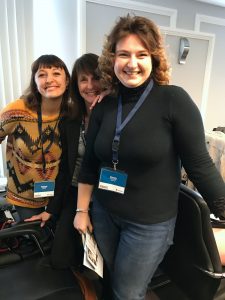 Some wonderful contacts were made with teachers in Ternopil, Ukraine (about 90km east of Rohatyn) when Rohatyn Jewish Heritage attended a cross-border education seminar in Lviv on March 31 and April 1, 2017.  The teachers, Kateryna Tsybulska and Nataliya Porokhnyak, have been working to bring Jewish memory and Galician multi-ethnic history to their high school and college students. Their latest project partnered Ukrainian students in Ternopil with Polish students and their teacher Jacek Jaros across the border in Kielce, using inexpensive internet tools such as Skype. The students devised a project and developed it together, first studying and exploring their own cities’ Jewish histories and then creating a film which compares the two cities from their different perspectives. The film has been submitted into competition, and was presented at the seminar as an example of cross-border cooperation in education for building democratic values, active citizens, and a culture of remembrance. 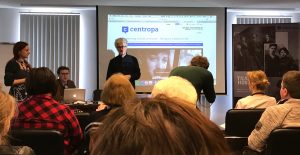 The Lviv seminar, sponsored by the Vienna-based non-profit historical education institute Centropa, in partnership with Lviv-based NGO Інститут Суспільних Ініціатив (Society Initiatives Institute, SII) and Rivne-based Мнемоніка (Mnemonics), as part of an ongoing joint program called Trans.History. The seminar was entitled Civil Society, Social Media, and 20th Century Jewish History in Ukraine; it brought together more than 60 teachers, non-formal educators, civil society activists, and journalists from across Ukraine, as well as Poland, Moldova, and Germany. Many of those present, like Kateryna and Nataliya, already had experience participating in Centropa’s teacher training and educational programs, and a key strategy and component of the seminar was the sharing of experience between teachers who had managed programs already with those who were looking to begin programs at their own schools. Centropa began its work in U.S. schools more than a dozen years ago, expanding over time into schools in western and central Europe. Ukraine was added in 2015 through its Trans.History program, and this year Moldova was included. 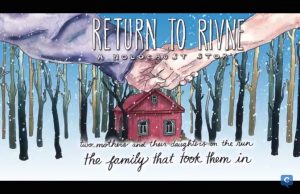 The Centropa film “Return to Rivne” on their website.

Day 1 of the two-day seminar featured the screening of Centropa’s film Return to Rivne about prewar and wartime Jewish experiences in Rivne, narrated by two Jewish cousins who managed to survive the Holocaust in a village near there for 20 months, along with their mothers. Separated in 1945, one of the surviving cousins emigrated after the war to America; the other, to Russia. It wasn’t until almost 30 years later that the sisters and their families were reunited. Through the participation and encouragement of Centropa, in 2013 the cousins made an unforgettable return journey back to Rivne together, to revisit their wartime hiding places and retell their stories of survival. Both sisters today live in America and are actively working to honor the descendants of the Ukrainian family that hid and fed them, thus saving their lives. The Rivne film is one of many varied resources Centropa provides through its education program for introducing the topic of the Holocaust in participating schools. 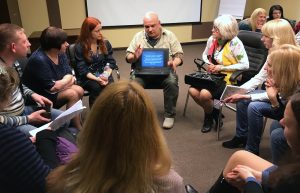 Following the presentation of the film, the seminar turned to a “marketplace of ideas” in which several educators made presentations of their students’ projects with a discussion about what worked well and what didn’t; this included more information on the Ternopil-Kielce joint project, “History in Faces”. Then, smaller groups were formed, generally by country and language, to conduct intimate workshops for the exchange of practical questions, ideas and dialogue between the educators. In a separate session for teachers who have already begun using the Centropa materials, program leaders encouraged them to boost their use of social media tools to network with other teachers and with their students, to overcome geographic distance and political borders in sharing common goals and experiences.

Teachers from around Ukraine and Poland sharing their experiences using the Centropa materials during seminar sessions throughout the day. Photos © 2017 Marla Raucher Osborn. 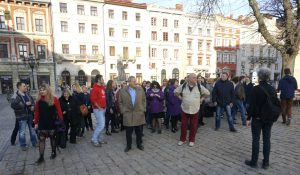 Day 2 of the seminar began with a guided tour of Lviv’s historic sites of Jewish heritage in the city center, including The Space of Synagogues which opened officially in September 2016.  Professional guides based in Lviv and fluent in Ukrainian, Polish, and English were provided by the seminar organizers.  From there, seminar participants walked a few blocks to visit an installation of the Trans.History traveling exhibition entitled My Ukrainian Jewish Family Album. Using some 20 large-format roll-up panels, the exhibition of texts, photos and maps covered the rise of Nazism and the annihilation of central and eastern Europe’s Jewry as the German war machine progressed east. The panels equally focused on prewar Jewish and Ukrainian life (leisure, sports, education, family), as well as on the dark years of the Holodomor and the Holocaust. Geographically, the exhibition specifically focuses on the people and regions of modern Ukrainian lands and is therefore well suited to the participants of this seminar.

As we hope later this year to work more closely with Rohatyn educators who have expressed interest in bringing such topics as Jewish culture and history and the multi-ethnic identity of prewar Rohatyn to their students, the timing of this seminar could not have been better. Furthermore, connecting with teachers who have practical experience using Centropa’s Trans.History materials provided us with a unique opportunity to hear a variety of methods used by the teachers to tailor the materials to their needs and to make the Jewish component specific to their town’s history and heritage. The Trans.History report on the seminar is now on their website with other resources.

As Centropa so aptly stated at the seminar, “no one teaches a teacher better than another teacher.” For Rohatyn Jewish Heritage, we hope to introduce Centropa’s materials and programs (Trans.History and others) to Rohatyn teachers as a resource, and to help arrange for Ternopil educators Kateryna Tsybulska and Nataliya Porokhnyak to speak with Rohatyn educators about their experiences. They can provide practical perspectives about the ways in which the Rivne film and other educational materials can promote classroom dialogue, can share their students’ projects as examples of student-driven creative learning opportunities, and can answer questions about methods for bringing Jewish memory back to the modern Ukrainian town of Rohatyn.

Rohatyn Jewish Heritage sincerely thanks Centropa and its leaders for offering to us the opportunity to attend this interesting and useful seminar, in particular Centropa’s Director Edward Serotta, European Director of Education Fabian Rühle, and Education Coordinator Esther Cotoarba, as well as local SII leaders Taras Repytskyi and Viktor Petrov. Their vision for sustainable teaching (teachers teaching teachers) as a means to amplify skills and resources in education is both inspiring and grounded at the same time.