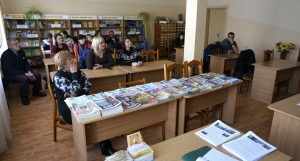 Teachers, museum directors, librarians, and historians gather for the start of the discussion. Photo © 2017 Jay Osborn.

Rohatyn Jewish Heritage met again yesterday at the Rohatyn Public Library with about twenty Rohatyn educators, including teachers plus museum and library personnel, most of whom had also been present at our last get-together on 06 September 2016. The purpose of the meeting was to follow up on questions raised in September which we had been unable to sufficiently answer without further consultation with Jewish educators and academics, online resources, and those more familiar with Jewish religious practices, including Rabbi Moyshe Kolesnik of nearby Ivano-Frankivsk. Also present was the director of the Rohatyn local history museum as well as Olha Maletska from Rohatyn’s regional museum “Opillya”, re-opening in May 2017. We were accompanied by our longtime friend and supporter Alex Denysenko, as well as Dmytro Hural from Law Craft Legal & Consulting, and Sasha Nazar, head of the Lviv Volunteer Center, a JDC-supported program of the Hesed-Arieh charity in Lviv.

Since September, we have worked hard to address the educators’ questions, and we have new web pages written to help provide answers for some of them under the categories of Educational Resources and Jewish Culture, linked here: 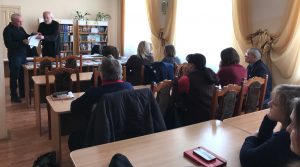 Two of these pages already also have online Ukrainian language versions, which we printed off as handouts for the meeting and distributed. The third page is expected to go online in Ukrainian in the next few weeks, and will be printed and brought with us on our next meeting with the Rohatyn educators.

To the question raised about sharing Jewish history and information which several local historians have collected over the years, we expressed our appreciation and desire to gather, evaluate, and help promote these items on our website and with Rohatyn Jewish descendants. For example, Liudmyla Ivakhiv, a teacher at Rohatyn School #2 (known in the interwar years as the “Polish School”, or the “Red School” because of the building’s red brick exterior), asked about involving some of her students in a project with an elderly woman in Rohatyn who was born to a Jewish family and who escaped the liquidation of the ghetto as a child, then was raised by a non-Jewish family. We believe this woman is a descendant of the Reiss family who we met in May 2012 through Mr. Vorobets, and who invited us to speak with her at her home, where she shared a number of family stories and historic photos. 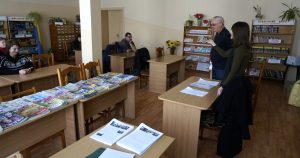 Rohatyn Jewish Heritage is very eager to cooperate with the Opillya regional museum, and to contribute in any way it can to the museum. According to museum director Olha and deputy director Vasyl Serdyuk, the Opillya museum is developing an exhibition room dedicated to the region’s prewar multi-ethnic diversity, including Jews, Poles, and Ukrainians and the relationships between them. Last week, the museum made a call in the local Ukrainian press and social media for contributions of Rohatyn-specific folk art and family artifacts. We are already discussing and sharing ideas how we and other Rohatyn Jewish descendants may be able to contribute to the museum’s exhibition and to the recovery of Jewish memory in the area. We will also reach out to members of the Rohatyn District Research Group (RDRG), inviting contributions. Recovery of Jewish memory in Rohatyn is the goal, and we hope the RDRG will become one of our key partners in this new project.

With regard to the educator’s question about the placement of plaques on Rohatyn buildings which have a Jewish history, we again expressed our support to assist in this worthy proposal, especially once the spring 2017 mass grave survey work has been completed. There are already a number of plaques around Rohatyn highlighting people and events associated with buildings, and we hope to help expand the historical footprint of the Jewish community in town. 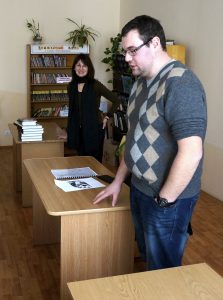 Finally, about the September request for Hebrew language lessons in Rohatyn, we were surprised to hear several teachers explain that a number of their students had made trips to Israel and now hoped to learn the language. Unfortunately we had learned in last month’s meeting with Rabbi Kolesnik that the elderly man in his congregation who had been giving Hebrew language lessons in Ivano-Frankivsk had very recently passed away with no one to replace him. We asked Sasha Nazar of the Lviv Volunteer Center to speak on the topic; he explained there are many ways that Hebrew can be taught, depending on the aim of the knowledge, ranging from transliteration of the alphabet to full conversational and literary language skills, and the teaching should be matched to the purpose. He confirmed that there are resources in Lviv for teaching Hebrew and/or Yiddish, depending on the need. The teachers agreed to survey their students interests and requirements, and we agreed to follow up on the topic at a future meeting when the students’ needs are more fully known. 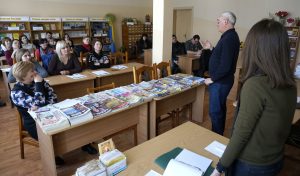 Alex expands on one of the topics of discussion during the question and answer portion of the meeting. Photo © 2017 Jay Osborn.

Then we opened the discussion to new comments and questions from the educators. We were able to answer some of the new questions during the meeting. Two of the questions came from the director of the Rohatyn city history museum, including about the interpretation of symbols and motifs on Jewish headstones. This is a very important topic to us as well, as the headstones are now one of the few visible and tangible signs of Rohatyn’s Jewish community. We directed the educators to a new resource page on the Rohatyn Jewish Heritage website, noting that all of that page’s photo examples are specific to Rohatyn; a Ukrainian language version of the article should be online in a few weeks. Like the English language article, the Ukrainian version will include sources we used in assembling the material, for those interested in further study of this very complex but rewarding topic. The director also asked about the specific meaning of down-turned hands on an old sign on a building in Rohatyn, which we have not yet seen. Although we did not have time to find and photograph this sign during yesterday’s visit, we promised to follow up and try to learn more for presentation at a next meeting.

Noting that  Rohatyn Jewish Heritage is now a Ukrainian NGO (thanks to Law Craft LLC), and that Jay and I are now living in Lviv, we concluded the forum by extending a welcome for regular face-to-face meetings with both educators and students, as well as individual historians and representatives from the museums. It was clear that our interest in the city’s history is shared by all who were present.

To help with the ongoing dialog in Rohatyn, we also donated six copies in Ukrainian language of the new book, Jews and Ukrainians: A Millennium of Co-existence written by Paul Robert Magocsi and Yohanan Petrovsky-Shtern (University of Toronto Press; Toronto, 2016) to the Public Library, for use by Rohatyn teachers, students, and residents; another copy was donated to the Opillya museum for their reference collection. 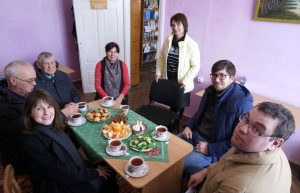 We would very much like to thank Alex Denysenko for his interpreting skills at the meeting, and Sasha Nazar, Director of the Lviv Volunteer Center for his participation and support. Sasha last visited Rohatyn in October 2016 when he brought a group  of volunteers from the Center to meet with local historian Mykhailo Vorobets, who spoke about Rohatyn’s prewar Jewish history and guided the group around some of Rohatyn’s surviving Jewish sites. We are grateful for the Lviv Volunteer Center’s desire to join us for this dialog forum with educators, and we look forward to working closely with them again on future heritage and educational projects in Rohatyn.

A special thank you also to Ihor Klishch, former manager of the internet center at the Rohatyn Public Library, for arranging this follow-up meeting. Ihor worked closely with Lidiya Zhidachivska of the Rohatyn’ library to reach out to the teachers, provide meeting space, and welcoming us as Rohatyn family; this was only the most recent of Ihor’s many efforts on behalf of the Rohatyn community. We are blessed to have such friends.