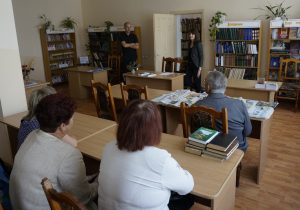 This afternoon we met with Rohatyn educators to open discussions about how Rohatyn Jewish Heritage can develop and share educational resources with Rohatyn students about their city’s Jewish past and present. As part of this envisioned long-term project of two-way educational collaboration and mutual benefit, we are very motivated to hear from Rohatyn’s teachers, students, and others so we can also build up and make available on our website some materials and information geared toward Jewish and Polish descendants of Rohatyn living abroad about their city’s Ukrainian past and present. 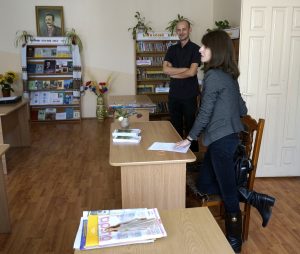 Ihor and Marla during the discussion. Photo © 2016 Jay Osborn.

Held in one of the large reading rooms at the Rohatyn Public Library, the hour-long meeting included local teachers from Rohatyn schools nos. 1 and 2, directors of the regional museum, several local historians, and members of the library staff.  We did not know in advance how many would attend and were very pleased that the group numbered about two dozen. This was the second meeting organized this year by the Rohatyn Public Library, and our third meeting with some of the teachers present. Ihor Klishch, former manager of the internet center at the library and now living in Ivano-Frankivsk (the capital of the region which includes Rohatyn), translated between English and Ukrainian –  although it turned out that several in the audience had very good English language skills. 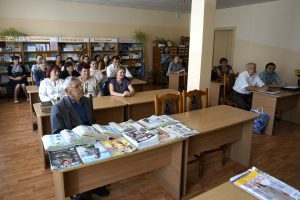 After describing the main purpose of the meeting and our desire for a two-way educational collaboration, we opened the floor for suggestions and questions, summarized below. To our surprise and pleasure, the questions were quite varied and also reflected a greater familiarity about Jewish traditions and history than we had expected. Some questions we were able to answer during the discussion; others will require more research and we promised to respond with answers, proposals, or redirection to better resources than we can provide. A summary of the suggestions and questions:

Some of the questions clearly indicate the need for a description of Jewish burial traditions on our website, with links to greater resources from experts. We are also intrigued by the idea of local Hebrew language courses, and will inquire in Ivano-Frankivsk if the resources there could also work in Rohatyn. The building heritage plaque suggestion immediately struck us as valuable, and we have seen great examples of that elsewhere, but we and others will need to do more research to gather images and data to make the project robust. And all the offers of information, assistance, and cooperation were very much appreciated.

We concluded the forum by reiterating our desire to hear from the education community of Rohatyn with information that can help us expand our online historic timeline of the city, and develop a broader and more rich picture of Rohatyn’s prewar economic and social life. 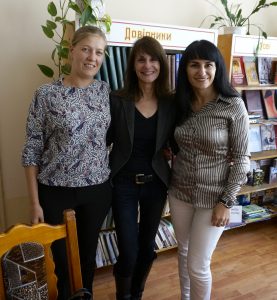 With the teachers of Rohatyn school number 2. Photo © 2016 Jay Osborn.

Afterward, two teachers at Rohatyn school no. 2 (known familiarly to Jewish descendants as the former Polish “Red School” because of the red brick used in its construction) remained to take photos with us and to continue the discussion, in English. They proposed to do some preparatory work with their students and asked if we could speak directly to their students on our next visit to Rohatyn; we agreed and proposed sometime in early 2017. In the meantime, the teachers offered to introduce to their students the idea of working with us on projects for discovering the Jewish past of Rohatyn and bringing Jewish memory back, and to explore what types of projects would interest the students. We gave the teachers a list of project examples that have proven interesting and successful at Polish schools participating in the “To Bring Memory Back” educational program of the Foundation for the Preservation of Jewish Heritage in Poland, and the Forum for Dialogue, among others. Examples of such projects include:

Rohatyn Jewish Heritage would very much support these and similar projects, and will investigate public forums (in Rohatyn, Lviv, and elsewhere) for showcasing such student projects. Additionally, we can explore creating a platform on our website on which students can share their projects, interact with teachers and administrators, and engage in discussions directly with Jewish descendants.