Meetings with Rohatyn’s New Mayor, the Library, and Students

It had been 8 months since our last visit. The goals for this trip were: to meet Rohatyn’s newly-elected mayor; to learn from Mikhailo Vorobets if any new Jewish headstones had been found; and to visit the Rohatyn public library to see what new books they purchased from our donation on behalf Jewish descendants of Rohatyn.

After picking up Mr. Vorobets, our first stop this morning was the Rohatyn Public Library. 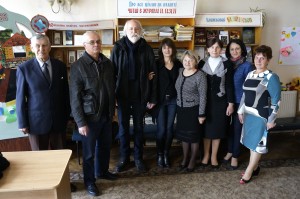 Our meeting with the library staff. Photo © 2016 Jay Osborn.

Thanks to arrangements made on our behalf by Ihor Klishch, the former Rohatyn library computer room administrator now working in Ivano-Frankivsk, we met with the director and some of the staff of Rohatyn’s public library. As we had arranged a few years ago, we again made a donation (approximately $200) on behalf of Jewish descendants of Rohatyn to enable the library to buy about 200 new books for Rohatyn children between the ages of 6-12. 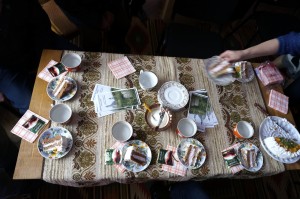 Quite the welcome at the library! Photo © 2016 Jay Osborn.

It was great to see familiar and new faces at the library. We were ushered into an interior room where tables and chairs had been set up for a small party.  About a dozen people shared cake and drinks and, with Alex Denysenko translating, there was plenty of laughter and discussion around the table. 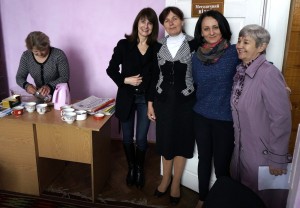 All those present from the library were women, including the director, and at least two of them had worked for the library for more than 30 years; the director was new to her position, having only come on board in the last 6 months. One of the staff spoke of her grandmother’s memories of Rohatyn’s Jewish families. All of them know Mr. Vorobets, and most of them had had him as their teacher. 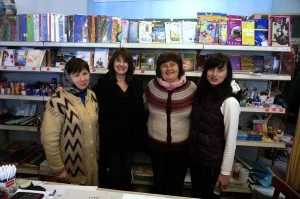 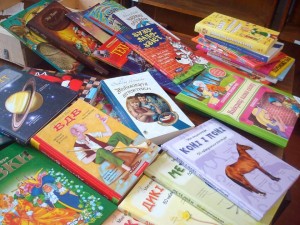 After our party we walked to the local bookstore to see the books the library had purchased with the donated funds. The bookstore is located at the northwest corner of the rynok across from the Ukrainian Church, in the same building where there was once a bakery owned by my Horn family.  Our group including two library staff members posed for photos with the bookstore staff, and there were a lot of smiles all around. It was a joy to be able to see and touch the new books. 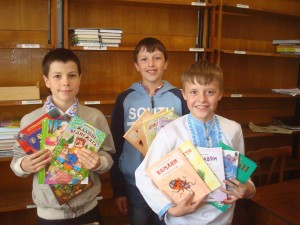 [Thanks to Facebook, a few days after our visit the Rohatyn Public Library posted photos of the new books spread out on library tables and Rohatyn children holding several of them, with big grins on their faces. Seeing their faces makes these some of our most rewarding moments in this project! You can see the pictures on the Facebook page for Pогатинська Центральна Бібліотекa (Rohatyn Public Library). ]

The library has been for us a special place since 2011: it’s where we had our very first meeting with Rohatyn local residents Ihor Klishch and Mikhailo Vorobets. That first meeting, plus subsequent others including our interview by local Ukrainian TV, can be found under News on this website. 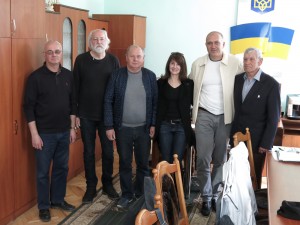 Our meeting with the new mayor and his staff. Photo © 2016 Tom Traber.

Our noon meeting was at Rohatyn’s City Hall. Those present from the new government administration were Sergij Stepanovych Nasalyk (Mayor), Mykola Grygorovych Shynkar (Deputy Mayor), and Halina Bohun, acting as personal assistant and secretary.  We had first met Halina back in 2011 when Alex Feller and I of the Rohatyn District Research Group (RDRG) gave an interview for Ukrainian local TV (link above). In our group was Alex Denysenko (interpreting) and Mikhailo Vorobets, local retired school teacher, plus Jay, me, and a long-time RJH program supported from California, Tom Traber, on his first visit to Ukraine. Our agenda was to introduce ourselves and the Rohatyn Jewish Heritage project, then to generally gauge the City’s mood and receptiveness about the various projects envisioned by the Rohatyn Jewish Heritage including hiring a  professional to determine the actual boundaries of the two mass grave sites (north and south end of town).

We presented to Mr. Nasalyk a copy of Christian Herrmann’s photographic book Spurensuche (Searching for Traces) which features Rohatyn’s old Jewish cemetery on the cover. 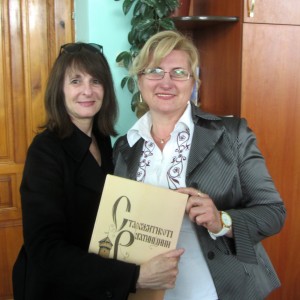 Marla and Halina with the book gift. Photo © 2016 Tom Traber.

We also gave approximately 400 Ukrainian language brochures for Rohatyn Jewish Heritage plus a handful of brochures in English as well.  Our hope is that these brochures will be publicly available at Rohatyn’s City Hall for locals and foreign visitors. The City made a gift to each of us of a new book on Rohatyn’s history.

After our introductions about the history of our visits to the town, my family connections, and the ongoing and planned projects of Rohatyn Jewish Heritage, Mr. Nasalyk presented the City’s perspective.  It was quickly apparent that he was already aware of us and the Rohatyn Jewish Heritage project. We learned that Mr. Vorobets had been one of his teachers.  We could tell that there had already been discussions between the men prior to our arrival.  Despite the official nature of the meeting and the need for translation back and forth between Ukrainian and English, the atmosphere was casual and relaxed and both Mr. Nasalyk and Mr. Shynkar spoke with great deference about Mr. Vorobets’ position in the community and his selfless work over the years in caring for Rohatyn heritage sites (not just Jewish sites). Very matter-of-factly Mr. Nasalyk then explained that it is “proper” and “appropriate” for the City to take responsibility for all cemeteries in Rohatyn, that there would be “no discrimination” in the attention given cemeteries, whether Christian, Jewish, or Turkish, that all were important and deserving of protection and care.  More than once he expressed the City’s desire to be involved in our projects and to be considered an active participant. We agreed to keep the City apprised at all our steps along the way. 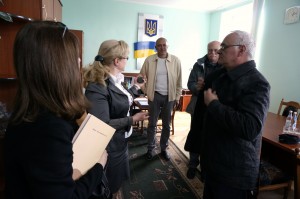 Particularly important to us was to learn that there is now a specific line-item in the City’s budget not only for the maintenance of cemeteries, but also for the creation of a Jewish “memorial space” at the mass grave site at the north end of town.  Mr. Nasalyk stated that the City envisioned creating a community service program that would involve Rohatyn residents in caring for the cemeteries and making necessary repairs when needed, because, as Mr. Shynkar put it, the community is “Rohatyn’s greatest asset”.  More than once, the mayor expressed the “importance of preserving the past” and that the City supports heritage projects, including those important to Rohatyn’s Jewish past. We were of course very pleased to hear this information. Mr. Vorobets was visibly pleased as well.

We also expressed our desire to see the boundaries of the two mass grave sites (north end and south end of town) accurately determined. We explained our intent to apply for assistance by a recognized scientist in this area who uses non-invasive techniques at sites of execution. This sentiment was echoed at the meeting not only by Mr. Vorobets but also by the mayor and the deputy mayor;  Mr. Nasalyk agreed that it was “to the benefit of everyone” – Jewish descendants and Rohatyn locals – to mark out the boundaries in a permanent manner. More information about our plans and today’s visits to the mass grave sites is in a separate news report. 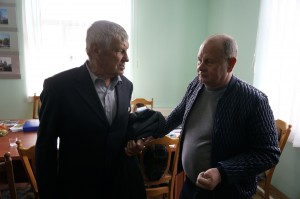 Deputy Mayor Shynkar then highlighted some of the heritage projects completed in Rohatyn in the last 5 months. These include building a new fence at the large Ukrainian cemetery south of town as well as renovating the adjacent memorial to Turkish soldiers killed in WW1. (Later this afternoon we saw both these completed projects and were very impressed; even the dirt road leading to the Turkish memorial is now professionally graded).  We learned that the Turkish Ambassador to Ukraine was coming to Rohatyn on May 20th, part of a City-sponsored commemorative event to honor the more than 7000 fallen Turkish soldiers.

We concluded our meeting discussing a possible educational component of Rohatyn Jewish Heritage that could involve the local schools and students, and agreed to pursue this further at a future meeting.

[Update: The day after our visit, the official website for the City of Rohatyn posted the group photo taken at the conclusion of our meeting with the following caption (translated from Ukrainian):

“Expansion of cooperation and mutual co-operation on a number of projects in Rohatyn on Jewish heritage involving two Jewish cemeteries and mass grave memorials.”

We are feeling encouraged that momentum may finally be building for Rohatyn Jewish Heritage. 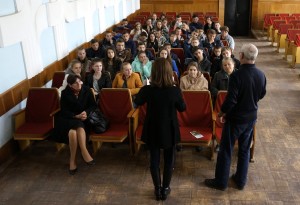 At the Sokal for an informal discussion about our mutual connections to Rohatyn. Photo © 2016 Jay Osborn.

To our surprise and great pleasure, the Rohatyn Public Library made arrangements for several dozen high school students to meet with us in the historic Sokal building.  We had no time to prepare an actual speech or to provide handouts, but with Alex Denysenko’s help as translator, I spoke to them about my Horn family, their bakery business in Rohatyn, where they lived, Rohatyn Jewish descendants in the world today, and a few of the educational projects envisioned by Rohatyn Jewish Heritage.

There were several teachers in the group, a few of whom asked questions designed to engage the students and encourage them, to drop their shyness and to exercise their English through questions; a few did.  Many reacted when they learned that Rohatyn Jewish Heritage is on Facebook. Fortunately we had brought photocopies of some historic prewar Rohatyn buildings which we were able to circulate, and it gave us an opportunity to share our idea of engaging the students to participate in a photo-sharing project on this website.  We also extended an invite to the students to create their own projects for sharing on the website, including historical narratives of Rohatyn’s families.

With a few of the students and teachers after the discussion. Photo © 2016 Jay Osborn.

It was a delightful 45 minutes, and ten or so English students remained after to talk and ask questions in a more informal setting. Individual and group photos followed, many of which were later posted on Facebook by the students themselves. (Don’t forget that anyone can communicate with us and our program through the Rohatyn Jewish Heritage page on Facebook). We promised to organize a more thorough, planned, and interesting presentation at a future meeting, perhaps when we return to Rohatyn in September.

Education is a key project under Rohatyn Jewish Heritage, and one we intend to focus on more in the future, with the goal of creating materials for use by the schools and students and encouraging active cross-sharing of information through this website.

A separate report on new Jewish headstones recovered in Rohatyn was filed by Jay earlier this evening; there are some great images there together with the update summary.

We are grateful for the continued assistance of Ihor Klishch and Liubov Yankiv-Vitkovska who worked out the on-the-ground logistics of arranging these meetings for us in Rohatyn, and also for our translators and usual Ukraine traveling companions Alex Denysenko and Vitaly Shkurko. With these dear friends, our twice per year visits to Rohatyn remain enjoyable for us and fruitful for the project. Thank you.

Our next visit to Rohatyn will be in early September 2016.