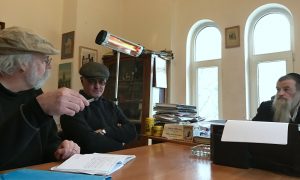 Rohatyn Jewish Heritage met yesterday with Rabbi Moshe Leib Kolesnik at his office in the synagogue of Ivano-Frankivsk, together with our friends and interpreters Alex Denysenko and Ihor Klishch. Among the many topics we discussed was the upcoming spring 2017 mass grave survey work to be conducted by Dr. Caroline Sturdy Colls and her team from Staffordshire University. As expected, the Rabbi was very supportive of the planned non-invasive survey work, and he confirmed his availability to advise and assist the archaeology team with questions and issues of religious significance. During the past decades he has documented and photographed many Jewish sites in and around the Ivano-Frankivsk Oblast, including Holocaust-era mass graves, and he recognizes the necessity of the upcoming survey work in Rohatyn. We agree with his words today: “What is important is that something is finally being done.”

We also used the opportunity to ask Rabbi Kolesnik some of the questions raised by educators in Rohatyn during our September visit to the city, relating to Jewish burial traditions, and regarding appropriate language to use when speaking about and with Jews. It was a fascinating discussion; he proved very helpful in providing clear and regionally-relevant information, which we will include soon in separate reference pages on our website. The Rabbi also volunteered to meet with Rohatyn teachers and students at a time of our arranging, to discuss past and current Jewish life in the region, and to answer further questions. 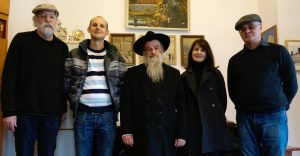 Rabbi Kolesnik has been a great supporter of Rohatyn Jewish Heritage in several areas over the past six years: guiding our ongoing recovery of Jewish headstones around the city, providing a respectful burial for human remains found under Rohatyn’s Ukrainian church, advising on our plans for rehabilitation of Rohatyn’s old Jewish cemetery, and more. He has also met with other Rohatyn Jewish descendants over the years, and was present in 1998 when survivors and their families returned to Rohatyn to remember and to erect several new memorials.

Today, advancing age is taking a toll on the Jewish community of Ivano-Frankivsk. The Rabbi noted that just in the past month the community lost two elderly members, including a man who had been volunteering as a Hebrew teacher. Holiday services at the synagogue bring 30 to 50 community members of all ages. Before leaving the Rabbi’s office, we made a donation as usual, and hope to support the community there in other ways this year.

While in Ivano-Frankivsk, we also visited the regional state archives, where we continued our research on the Jewish history of Galicia and Rohatyn. While there we photographed a large file of records and correspondence from the 1920s and 1930s pertaining to Rohatyn’s old and new Jewish cemeteries.

Stamps of the City of Rohatyn and the Jewish Community of Rohatyn, from a 1935 letter filed by Kehilla leader Dr. Amarant regarding plans for the Jewish cemeteries in the city. Photo © 2017 Jay Osborn.

Thanks to Alex Denysenko for the train and lodging arrangements and for interpreting during our meetings and research. And our warm thanks to both Alex and Ihor for their many years supporting our work in Rohatyn and beyond; you will find them both in our earliest project reports from 2011, and they have helped us immensely in building connections to today’s Rohatyners.