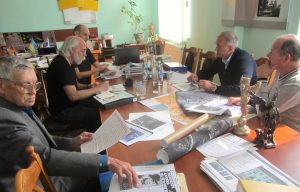 This morning Marla and I met with Mayor Serhii Nasalyk and Deputy Mayor Mykola Shynkar of Rohatyn to outline the non-invasive archaeological survey work we have commissioned for spring 2017 to determine the geographic boundaries of the WWII Jewish mass graves in the city. Accompanied by our friend and translator Ihor Klishch, and our long-time colleague and local activist Mikhailo Vorobets, we discussed the objectives of the project and some of the advance work for which we are requesting support from the City office.

Left: the intended survey area (1) and extended study area (2) at the southern mass grave site; right: the corresponding area in the 1944 aerial photo.

We gave the City copies of a document package we had prepared in both English and Ukrainian, containing our original request for proposal (RFP) to the Centre of Archaeology at Staffordshire University, the detailed survey proposal prepared for us by the Centre’s research lead Dr. Caroline Sturdy Colls and archaeological project manager Kevin Colls, plus a set of map images to graphically define the different work zones at each survey location (with reference to the 1944 Luftwaffe aerial photo of Rohatyn as a reference to ground conditions at the sites one to two years after the killings).

We opened by expressing our gratitude for the ongoing attention and care the City gives to the Jewish cemeteries and mass grave memorials in Rohatyn; we noted that the interest and care that Rohatyn shows in its multicultural history is a very positive example in Ukraine and in the world. While discussing recent recoveries of Jewish headstones and fragments to the old Jewish cemetery, Mayor Nasalyk reiterated a message he has stated before, “I want to assure you that the Jewish cemetery was and is a part of the past and present history of Rohatyn.” 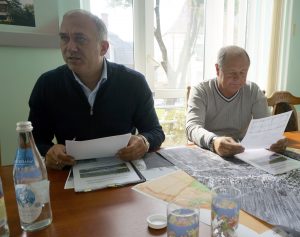 We had already briefly described our plans for the mass grave sites in a meeting with the City last May, so we spent the majority of today’s meeting discussing the details of the proposed survey work and its impact on local landowners and businesses. Specifically we asked that the City assist us to identify and gather contact information for anyone whose land falls wholly or partially within the extended study areas, so that we can request permission to access the land during the study even where we do not currently anticipate needing to survey. We will also be asking a subset of those landowners for permission to cut and clear vegetation in the survey areas, and we will offer compensation for crop or garden losses due to that clearing.

The City confirmed they will identify all of the affected landowners by the end of 2016, and gather contact information for each of them. For much of the survey area, they believe contact and permission should be easy, as the number of landowners is small and the City itself is one them. For part of the survey area which crosses residential plots, some effort will be required but they are confident of completion by year-end. The City also proposed to hold informational meetings with landowners and other residents of Rohatyn, to explain about the survey project and its goals; we welcomed this idea and will try to provide reference information they can use in those meetings. 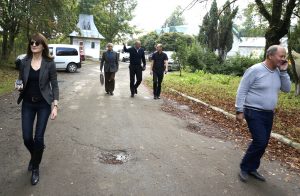 We also explained the need to avoid disturbance of the ground in the survey areas in advance of the survey work. The City understands the issue, and assured us that in two of the areas there would be no issue. At the northern mass grave site, the City has budgeted to renovate the industrial yard into a park which will include an expanded memorial space dedicated to the Rohatyn area Jews killed there, and they had previously planned to begin work on clearing the site before next spring. Based on our discussion today they have now decided to limit their preparation work there to clearing above-ground construction debris until the archaeologists have walked the site at the start of the survey work. 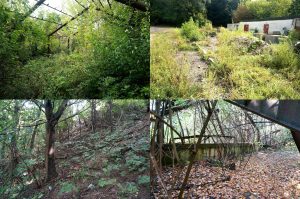 Some of the survey challenges at the northern mass grave site. Photos © 2016 Jay Osborn.

We also discussed together some other details for planning, including local holiday schedules, access to the City yard on weekends, geographic analysis software, etc. We anticipate there will be several more email and in-person exchanges about this project to pass information and resolve issues over the next six to eight months. On their part, the archaeology team have quite a lot of planning and logistical details to work out ahead of the site work, including arranging permissions from national cultural heritage offices in Ukraine; we will assist as we can with connections to local rabbinical authorities and other stakeholders. 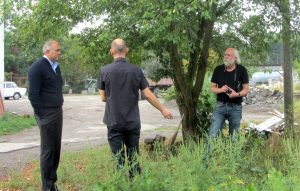 Following the meeting, the Mayor and Deputy Mayor accompanied us to the northern memorial and mass grave site, which is the most complicated of the survey areas. Together we reviewed the probable and possible locations of the grave boundaries, existing buildings and trees, construction debris, and other details. Both men know quite a lot about this site and provided helpful information and suggestions.

While standing at the northern site, Mr. Nasalyk also related a personal recollection: As a child his family lived quite near the site, and he used to play in the large yard. Even before the war, this site had been a quarry for sand and stone, and one day city workers had come to collect sand for construction work in town. At about 50cm below the surface, the workers struck a layer of bones and stopped to notify authorities. The bones were then covered again, but not before stories circulated about what had happened there during the war. The young Mr. Nasalyk was horrified, and the memory of that day stays with him. Today he lives at another location near the site, and his heart is heavy with the thought of what happened very close to his home. 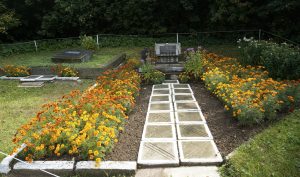 It was a productive and encouraging meeting, and we are grateful to all participants for their consideration and their ideas. In the coming months we will be updating our project page on the mass grave memorials with copies of our RFP and the archaeological survey proposal, additional photographs and other details of the planned work.