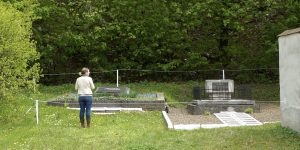 Yesterday we met with the City of Rohatyn to plan ground preparation work ahead of the non-invasive GPR survey of the Jewish mass grave sites on city land. Marla and I traveled from Lviv with our friends Alexander Nazar (head of the Lviv Volunteer Center, or LVC), Vitaliy Nadashkevych (CEO of Law Craft LLC and a board member of the LVC), and Vasyl Yuzyshyn (our driver and interpreter during the survey week). We were also joined again in Rohatyn by American Peace Corps volunteer Casey Alexa Peel, who is teaching English in Rohatyn now and through 2018.

Discussions with the City about aspects of the survey ground preparation. Photos © 2017 Marla Raucher Osborn.

We were met by Rohatyn’s Deputy Mayor Mykola Shynkar, as well as director of the municipal landscaping and community improvement department Vasyl Myts, city council secretary Halyna Bohun, and our primary city contact Olha Blaha-Maletska, who also directs the Opillya regional museum now in development in Rohatyn. We have worked with all of these City leaders on several occasions in past years. Rohatyn historian and citizen activist Mykhailo Vorobets, who has done much to recover and preserve Rohatyn’s Jewish history and heritage, joined all of the meetings as an advisor on both the site histories and on local labor connections. 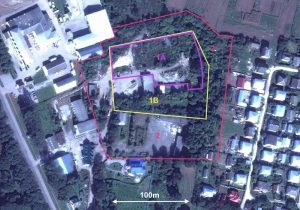 Discussions centered on the detailed ground preparation requirements provided to us by the archaeology team who will conduct the non-invasive survey, so that their instrumentation can pass very close to the surface of the soil at each of the sites without significant obstruction. As detailed by Dr. Caroline Sturdy-Colls and Dr. Kevin Colls of the Centre of Archaeology at Staffordshire University, who will lead the survey team on site beginning in less than a month, all vegetation except medium- and large-sized trees must be cut and removed to within 5cm of the soil top surface. Also, all loose inorganic material (debris) must be taken away as well, especially metal at or near the ground surface. Complicating things for the workers doing the clearing, the soil itself should not be disturbed, for example to simplify the removal of trees, and the vegetation clearing should wait until a week before the survey (to minimize re-growth).

So that we all could better understand the practical requirements and the scope of the work, the City leaders joined us at each of the sites to walk the ground and inspect the current state of vegetation and debris. It was apparent in our visit to the sites that the large areas which need to be cleared and the short time window in which the work can be done would overwhelm the city landscape staff who are assigned to support us in this work. To supplement the work which the city will manage from their resources, we agreed that:

Resourcing and scheduling by the three different teams is in progress now, and we will post a quick report with images from the ground preparation work after we return from Rohatyn in mid-May.

In a separate discussion about the developing Opillya museum, Olha and the Deputy Mayor invited us to help plan a portion of the museum’s exhibits on the interconnected ethnic groups in Rohatyn’s past, and they gave us several examples of themes and details about the Jewish community that they are interested to incorporate, if suitable materials can be found to support the displays. As museum director, Olha is making similar requests and inquiries to other representatives of communities who played important roles in Rohatyn’s past, including Polish and Turkish embassies. Marla and I have already provided a number of suggestions from publicly-accessible sources with Rohatyn connections,  which we are using to develop the history, culture, and education portions of our website. We will follow up with the Rohatyn District Research Group (RDRG) to invite other ideas and materials for the museum, if possible.

As is typical for our visits in the warmer months of the year, Mr. Vorobets received a report that another two Jewish headstone fragments had been unearthed when the local water company was digging to make repairs on part of the water system. It is not known exactly where these two fragments were found, but workers at the water company have already transported them to the old Jewish cemetery to join the growing collection, at no cost to us. We expect there will be more discoveries of this type, perhaps even before spring is over, and we will document those when we have time to revisit the old cemetery. 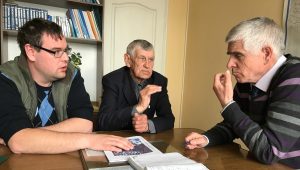 We would like to thank the City of Rohatyn for their continued support of our heritage program, for their commitment of staff and resources to help clear the mass grave sites before the survey, and for their ongoing respect for the many communities which helped build the city. We are grateful for their help and courtesy. Our sincere thanks also to Vito, Sasha, and Vasyl for their important problem-solving efforts to help us find solutions to labor and schedule issues in the planning, and to Casey and Mr. Vorobets for connecting us to the local community.