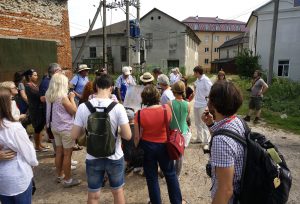 With the group in the old Jewish quarter of Rohatyn, looking at a 19th-century map. In the background, the former Beit Midrash building. Photo © 2017 Jay Osborn.

Yesterday Jay and I were very pleased and proud to serve as a “local” resource for approximately 35 Polish educators, guides, and activists enrolled in an educational summer tour organized by Lublin-based Rootka – Following Heritage Traces. Rohatyn was the group’s first stop in this summer’s program “In Search of a Lost World”. We had met the Rootka team in Lviv late last year to discuss their preliminary travel schedule and the idea of making Rohatyn the group’s first stop in Ukraine. Of course we agreed; these engaged people are the vanguard for other interested visitors who they will help introduce to Rohatyn and to our heritage project work in the town. 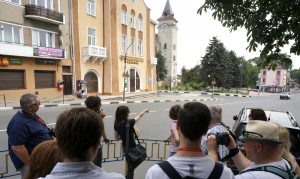 Among those in the visiting group yesterday were several friends associated with Lublin’s Brama Grodzka – Teatra NN, including Agata Radkowska-Parka (Rootka project lead), Wioletta Wejman, and Agnieszka and Piotr Sewruk, plus Teresa Klimowicz of the Stowarzyszenie “Studnia Pamięci” – Well of Memory, as well as friends from Warsaw: Albert Stankowski of Virtual Shtetl and the POLIN Museum of the History of Polish Jews, Wacław Wojciechowski, Łukasz Biedka, Karina Sokołowska-Folwarczny, and Ewa Bratosiewicz, to name a few. 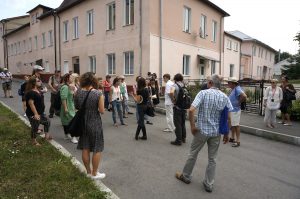 Near the former western synagogue, and the wartime Jewish ghetto. Photo © 2017 Jay Osborn.

Before we joined the group, they had already visited Rohatyn’s UNESCO-listed historic wooden Holy Spirit church, which dates from the 1640s. Our part of the tour began with a walk of the historic Jewish neighborhood in and around vul. Valova, where there had been at least four synagogues in the 19th century, plus other Jewish community buildings. Today, only the interwar Beit Midrash is still standing. From there we walked to Rohatyn’s main town square, now named for Roksolana, where Jewish families once owned and operated a majority of the businesses. 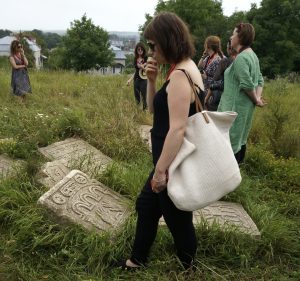 Thinking about the project work still ahead. Photo © 2017 Jay Osborn.

We continued toward the river, to see the site of the wartime Jewish ghetto behind the Ukrainian church, passing a surviving synagogue building (today part of a boarding school for disadvantaged children), the former Judenrat building (with a commemorative plaque), and a handful of surviving Jewish prewar residences. Rohatyn’s ghetto was almost entirely destroyed when the ghetto was finally liquidated in summer 1943. We carried with us the 1846 cadastral map of Rohatyn, which was useful to envision where and how Jews had once lived in the town.

Our next stops required the bus. First we visited the old Jewish cemetery, at this time of year very overgrown which makes it a little difficult to examine the hundreds of headstone fragments which have been recovered around town over the last six years. Then, we traveled together to the south mass grave site of the March 20, 1942 execution of Rohatyn’s Jews, and one of three sites professionally surveyed two months ago by the UK archaeology team of Dr. Caroline Sturdy-Colls. 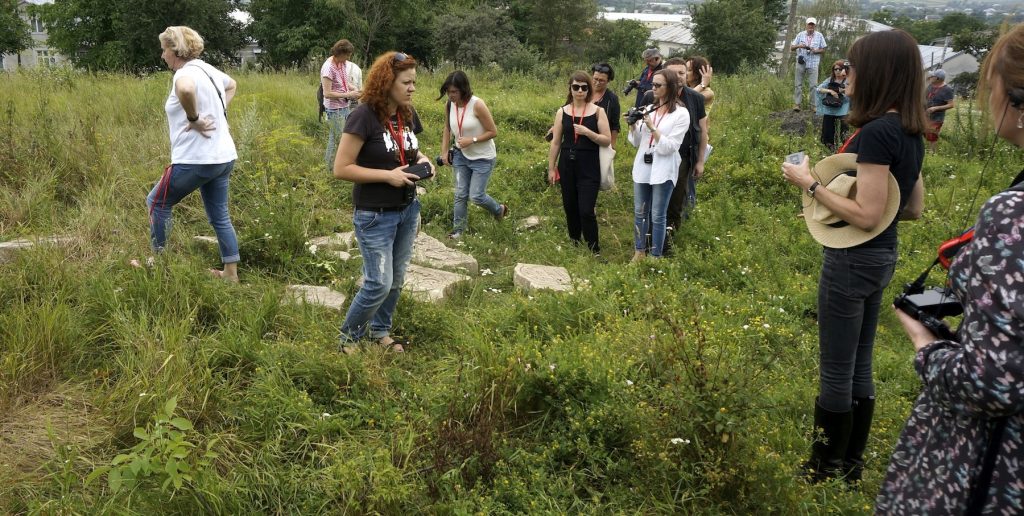 The group left Rohatyn yesterday evening with a better sense of the town’s prewar Jewish history. Before this visit, Rootka was last in Rohatyn in fall 2015. We are grateful to Rootka and our friends at Shtetl Routes for including Rohatyn on this summer’s itinerary, with special thanks to Agata Radkowska-Parka. We look forward to future collaborations and joint projects to bring Jewish memory back to the town of Rohatyn and as a part of heritage tourism in the region. 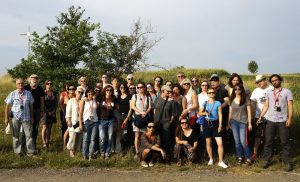 The group farewell photo at the end of the tour. Photo © 2017 Vasyl Yuzyshyn.

Rootka specializes in tailor-made tours focusing on Jewish heritage sites in Poland and Ukraine, and every summer organizes a travel program for educators active in teaching about shared Polish-Ukrainian-Jewish history. The program includes travel, lectures, and tours to see sites of Jewish heritage. Rootka also works closely with Lublin-based “Grodzka Gate – NN Theatre” Centre conducting workshops and lectures, as well as its affiliate Shtetl Routes which is active in cross-cultural tourism.