A view of the seminar group and meeting room. Photo © 2017 Jay Osborn.

Yesterday, Rohatyn Jewish Heritage was one of three presenters on the final day of an international EHRI (European Holocaust Research Infrastructure) research seminar organized by NIOD Institute for War, Holocaust and Genocide Studies (Amsterdam), the Center for Holocaust Studies at the Institute for Contemporary History (Munich), and our friends at the Center for Urban History of East Central Europe here in Lviv. On this fifth day, the two dozen PhD students participating in the 5-day seminar had the opportunity to hear directly from activists and hands-on volunteers working on projects of Jewish heritage in western Ukraine. The students spent their prior four days learning about resources in Ukraine for researching local and transnational history, Holocaust narratives and testimonies, and postwar judicial investigations, as well as working with academics involved in these areas of research, such as Karel Berkhoff, Senior Researcher at the NIOD Institute. In addition to teaching projects such as this seminar, the EHRI Portal offers access to information on Holocaust-related archival material held by almost two thousand archival institutions in Europe and beyond. 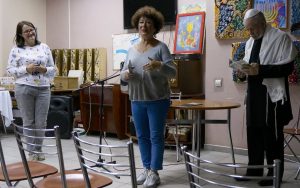 Ada Dianova opens the discussion with a description of the activities of Hesed-Arieh. Photo © 2017 Jay Osborn.

The seminar was hosted at the office of All-Ukrainian Jewish Charitable Foundation “Hesed-Arieh” here in Lviv, and was opened by the foundation’s director Ada Dianova who spoke about Hesed’s work over the last twenty years with Lviv’s Progressive Jewish community, as well as programs administered through its civic arm, the Lviv Volunteer Center (LVC), which, among other projects, works with high-risk children, senior citizens, people with disabilities, and projects of heritage in the Lviv Oblast. Ms. Dianova also highlighted Hesed’s ongoing contributions to a Yad Vashem program called “Fragments of Memory” aimed at gathering artifacts and firsthand memories of prewar Jewish life in Lviv. 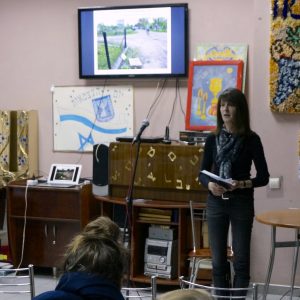 Rohatyn Jewish Heritage then gave an overview of its key projects and activities over the last six years, mainly in the recovery of Nazi-looted Jewish headstones, working closely with our local contacts like historian Mykhailo Vorobets, teachers and residents, the local Church, and the city administration. We highlighted our recent formation as a Ukrainian NGO and the formalization of an agreement of cooperation with the city of Rohatyn, the completion in June of a professional non-invasive survey at three WWII-era Jewish mass grave sites in the town, and ongoing cooperative work with Rohatyn’s new regional museum “Opillya” on a permanent exhibition on local Jewish history and culture.

We also shared with the students some of our ongoing and planned Holocaust-specific projects; namely, transcription and translation of survivor memoirs and accounts of wartime Jewish bunkers, identifying Ukrainian Righteous, and rehabilitation of the old Jewish cemetery. This latter project which will begin in 2018 specifically envisions working with the 500+ headstone fragments recovered to date and returned to the cemetery space. 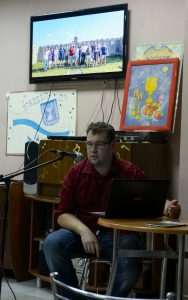 Sasha Nazar, project lead for the Lviv Volunteer Center, then made a presentation of recent heritage projects, including last year’s wall of memory at Dobromyl’s Jewish cemetery, the new roof completed last month at the Staryi Sambir synagogue, and clean-up work over the summer at the Staryi Sambir Jewish cemetery. The LVC had its first heritage project as a formal organization in 2015 at the synagogue in Sokal, after informally leading volunteer projects through Hesed for over a decade. Earlier this year, the LVC co-hosted a roundtable conference on Jewish heritage in the Lviv Oblast, which included mayors and city administrators from Dobromyl and Staryi Sambir. That rountdtable, which Rohatyn Jewish Heritage also attended, resulted in a memorandum of cooperation signed by more than a dozen participants committed to working together to cross-promote heritage sites, tourism, and the sharing of information and resources.

Jay and I had the great pleasure of working with the LVC at the Staryi Sambir Jewish cemetery, part of an international work camp of dozens of volunteers from Ukraine, Israel, America, and Russia that was organized this past summer. The final day of the camp culminated in a prayer and the lighting of shabbat candles at the Staryi Sambir synagogue, the first time in 75 years. The LVC is already working on plans for next summer’s work camp, with a number of Jewish sites in Jewish cemeteries in the Lviv Oblast under consideration for projects. 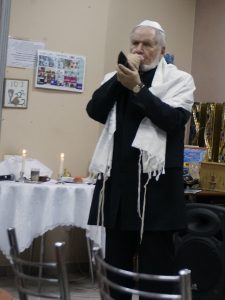 Last month I also joined the LVC for the unveiling of a memorial at the site of the former Grand Synagogue of Dobromyl, a project initiated by the Dobromyl town council and local Ukrainian activists (many of whom have also been working with the LVC), in partnership with Jewish descendants abroad. Sasha concluded his presentation by sharing LVC plans to create a permanent exhibition about the prewar Jewish community of Staryi Sambir for installation inside the synagogue, and a plaque to include QR codes on the outside, hopefully before year’s end.

The seminar concluded with a question and answer period from the students to the activists, followed by a shabbat prayer and meal.

We are grateful to Sofia Dyak and Anna Chebotariova of the Lviv Center for Urban History for the invitation to participate, and we give special thanks to our friends at Hesed-Arieh for hosting the event. 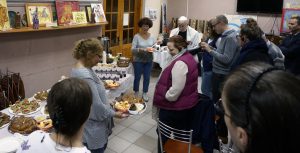 Celebrating the holiday with a festive meal hosted by Hesed. Photo © 2017 Jay Osborn.