78th Anniversary – We Remember in Rohatyn

Although the planned public gathering at the south mass grave in Rohatyn was canceled due to the worldwide virus pandemic, yesterday Jay and I traveled to Rohatyn and intimately observed a sad anniversary: 78 years since more than 3,000 Jews of Rohatyn were executed en masse in the first and deadliest Nazi aktion of the war. Half of the victims of that violent day were Jewish children. 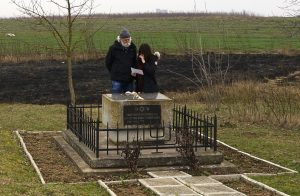 Standing beside the memorial at the south mass grave, I read El Malei Rachamim (אֵל מָלֵא רַחֲמִים, “God, full of mercy”), a prayer for the souls of the departed and for martyrs. Joining us was our dear friend and Rohatyn Jewish Heritage volunteer Vasyl Yuzyshyn. Peace Corps volunteer Andrés Rodriguez could not be present, having returned to America just before the Peace Corps announced emergency worldwide evacuations. His departure, together with strict measures implemented this week in Ukraine to minimize public gatherings to retard the spread of the virus, also meant that Andrés’ students and other Ukrainian friends in Rohatyn and the region could not attend, sadly including 86-year-old Mykhailo Vorobets. Though physically absent, they were all with us in spirit and solidarity to the memory of Jewish Rohatyn.

Our trip to Rohatyn marked our fourth consecutive year observing this anniversary at the site. Three years ago, Rabbi Kolesnik of nearby Ivano-Frankivsk joined us at the south mass grave along with friends and colleagues from Rohatyn, Lviv, and abroad. We hope to continue this tradition for years to come.

On March 20, 1942, most of Rohatyn’s Jewish community was forcibly removed from the wartime ghetto, assembled at the market square, and transported on foot and by truck to previously-dug trenches at the remote south site, where they were shot in small groups. The massacre was recorded in second-hand stories told by Jews and Ukrainians in memoirs, testimonies, and interviews. In 1998, survivors of the Rohatyn ghetto and their families in partnership with the city of Rohatyn erected a memorial at the site; Mr. Vorobets played a key role in the realization of that project and in maintaining local knowledge of the lost Jewish community. 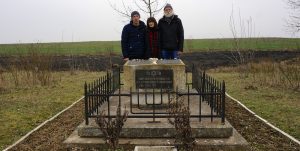 With Vasyl at the memorial monument after the prayer. Photo © 2020 RJH,

We close by acknowledging how grateful we are to Andrés for his Peace Corps service in Rohatyn and for his friendship. We wish him tremendous success in his future work with the U.S. Foreign Service in Washington DC. Andrés made a significant difference for many young, emerging leaders in Rohatyn; for Rohatyn Jewish Heritage, his affable personality and superb organizational skills inspired students and other Peace Corps volunteers in Ukraine to join us working at Rohatyn’s Jewish cemeteries, which helped to make a positive impact on the heritage and its value in strengthening public memory.

With the sudden withdrawal of Peace Corps Ukraine volunteers, Jay and I expect our ability this spring and summer to care for the old and new Jewish cemeteries to be affected as well. We will of course continue to do what we can – when we can – and still hope to work with Ukraine-based friends, supporters, and activists such as the Lviv Volunteer Center once quarantine and social distancing measures are eased here. We also remain hopeful that some Peace Corps volunteers will be able to return to Ukraine later this year to join us again.