We Remember the Tragedy of 79 Years Ago 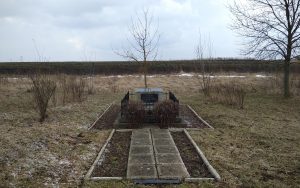 Last March 20, 2020, Jay and I stood before the memorial to the more than 3000 Jewish victims of Rohatyn executed on that date in 1942. This year we were unable to do so due to COVID-19, but thanks to dear friend and Rohatyn Jewish Heritage team member Vasyl Yuzyshyn, the destroyed Jewish community of Rohatyn was still remembered at the site today and we, the Jewish descendants, were thereby symbolically present to mark the horrific events of 79 years ago. Temperatures were bitingly cold and a light snow fell. 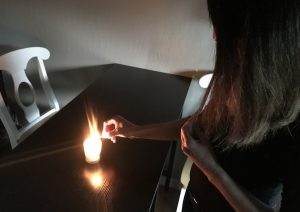 The pandemic is rising again in Ukraine, and Vasyl had to clear a health checkpoint on the road between Lviv and Rohatyn to be able to travel. Still sheltering in place in northern California, Jay and I joined Vasyl in spirit in Rohatyn, lighting a candle to the victims’ memory and reading aloud El Malei Rachamim (אֵל מָלֵא רַחֲמִים), a prayer for the souls of the departed innocents. We know that other Jewish descendants of Rohatyn also marked the anniversary this year as we did, either on the yahrzeit or on the western calendar date.

This was the first time in the last five years that Jay and I could not be present at the south mass grave in Rohatyn on March 20th. We are hopeful that in 2022 we will be able to be there to mark the 80th anniversary, an important and solemn milestone.

God full of mercy, grant them rest in peace. Amen.