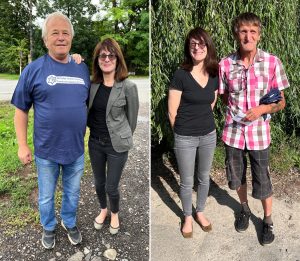 Our annual clearing of wild vegetation at the Jewish burial sites in Rohatyn got a late start this year due to difficulties caused by the Russian invasion of Ukraine in February and the ongoing devastating war. We reported in summer that we were not able to begin work this year until June, and that we have been reluctant to organize more than a few clearing days ourselves. Fortunately, two men in Rohatyn offered to do hired work for us at the sites this year, and together with some help from volunteers including Marla and me, both cemeteries and both mass graves look very good and well-maintained now. We heard from both men this week, who told us the growing season is over now, so the work is finished for this year. 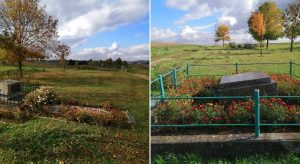 The south mass grave site after autumn clearing, and with planted flowers of commemoration. Photos by Ihor Zalypko.

Ihor Zalypko has been maintaining the two mass grave sites for us for a few years now, including cutting grass and wild shrubs as well as planting flowers and keeping the memorial spaces clean; this year was no different, and he did other maintenance tasks we normally handle at the sites such as cutting down the fast-growing and poisonous Sosnowsky’s hogweed. In late summer he also leveled the ground with a tractor between the memorials at the south site to make the area easier to maintain. 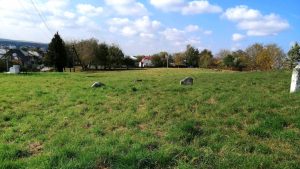 This year Ihor started managing the clearing of the old cemetery for us as well, a big job which always takes many days to complete. The first clearing was especially heavy because it came late; volunteers including Vasyl Yuzyshyn, Sasha Nazar, and Andrii Muzyka pitched in to help get that first round started, and a couple of local people also cleared small parts of the old cemetery for feed for their animals. Ihor completed a second full clearing of the cemetery last week, and the photos he sent show that the site is now clean, calm, and quiet. Ihor is well-known in Rohatyn, and it is good to have his reliable help on this big task. 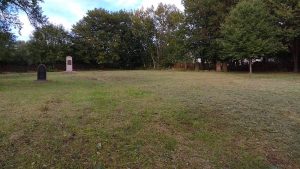 The new Jewish cemetery after its final clearing in late September. Photo by Vasyl Yurkiv.

Marla, Vasyl, and I cleared the new Jewish cemetery for the first time this year in early June, and at the end of that day we hired Vasyl Yurkiv, a neighbor of the cemetery, to clear the site by himself as needed through the summer and fall. He made two complete passes, in August and late September, and sent photos after his second round. Things look very good at the new cemetery now, and we hope to continue the current arrangement with Mr. Yurkiv next year and beyond. 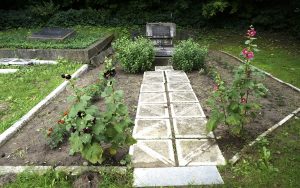 We hope that Russia is defeated and pushed out of Ukraine soon, so that we can resume visiting Rohatyn and monitoring the heritage sites as before. In the meantime, we are grateful to our volunteers and these good hired workers for helping to maintain the sites for us, for visitors, and for the Rohatyn Jewish community abroad.