First Round of Cemetery Clearing in 2022

When we wrote our annual report at the end of last year, we did not anticipate the Russian invasion of Ukraine in February or the impact the ongoing war would have on our regular operations working at the Jewish burial sites in Rohatyn. Not only did the war keep Marla and me from returning to Ukraine until the beginning of June, but for self-protection Ukraine imposed martial law with curfews and other restrictions, the military set up armed control points on roads between towns and villages, government services in the west focused on supporting the flood of refugees escaping destruction and terror in the eastern half of the country, and fuel for vehicles and motor tools has been strictly rationed. These rules plus the persistent danger of missile strikes even in our region prevented anyone from working in the Jewish cemeteries until we returned, and still limit when we can travel to Rohatyn and what we can do there. So this year we are dealing with some new challenges, and we are adapting.

The north and south mass grave sites and memorial monuments are cared for again this year by Ihor. Photos © RJH.

Fortunately we already have had an arrangement in the past two years to pay Ihor Zalypko, an engineer who works at Rohatyn’s vodokanal (the city facility where the north Jewish mass grave is also located), to clear weeds and grass at both the north and south mass graves and to plant decorative flowers around the memorial monuments. This year Ihor was willing to continue that work, and to extend his clearing work at the south site to include the entire area reserved as a memorial space. Ihor started his work in May, before Marla and I returned home to Lviv, so that at least the two smaller burial sites would visually demonstrate care.

Tall grass and weeds in the new Jewish cemetery obscured the monuments
and made visits difficult before we started work in June. Photos © RJH.

Marla, Vasyl, and I finally made our first vegetation clearing trip to Rohatyn on 09 June; that was a month later than we have started in the past three years, since we began regular care of the burial sites in summer 2018. Fortunately the remedial work we have been doing in past years helped to keep woody plants from growing strong in the cemeteries, but by the time we started work the grass had grown very high and tough. We just managed to clear the new cemetery together that first day, and did some regular pruning and trimming of tree branches which overhang the site as well. 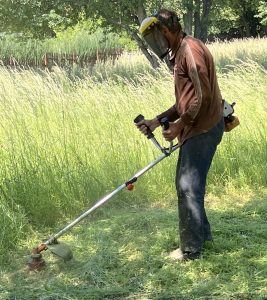 The cemetery neighbor works with us at the end of the day. Photo © RJH.

In addition to other impacts on everyday life for Ukrainians, the war and its effects on production and supply chains have caused prices to spike for many things, and have put some people out of work or on limited employment; people are hurting economically as well as from the stress due to danger. While we were working at the new Jewish cemetery, we were approached by a man who lives nearby to inquire whether we would hire him to clear grasses and vegetation regularly through the summer and autumn. He worked with us briefly to demonstrate his capability, and we agreed to a trial once the grasses in the new cemetery had grown enough to need cutting again, probably in late July or early August. If this works out, it could be a good arrangement for Rohatyn Jewish Heritage; having the cemeteries cared for by neighbors or other local people has always been our goal.

The old cemetery choked with grass and weeds in early June. Photos © RJH.

Coincidentally, Ihor Zalypko also approached us in June to ask whether we would hire him to manage vegetation clearing at the much larger old Jewish cemetery. We happily agreed, and hired him to do a complete clearing as soon as the weather and his work schedule allowed.

The crews working in the old cemetery so far this summer: RJH with Sasha Nazar and Andrii Muzyka (left) and with Ihor Zalypko (right). Photos © RJH.

As we were not sure when Ihor would be able to organize the work, Vasyl, Marla, and I first went to work in the old cemetery to clear high grass at the most visible places seen by cemetery visitors: around the front steps, along the front fence, and on a wide path around the larger standing headstones and the headstone fragments which we have recovered over the past decade. We spent a day in the old cemetery working with friends from Lviv: Sasha Nazar, head of the Lviv Volunteer Center and director of the Sholem Aleichem Jewish Culture Society (Sasha has worked with us many times in the past, and we have been happy to join his heritage projects also), and Andrii Muzyka, director of the Museum of the History of Lviv in the historic “Black House” on Lviv’s Market Square.

Clearing work in progress at the old Jewish cemetery in Rohatyn. Photos © RJH. 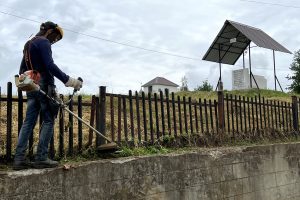 Beginning with a small crew, then continuing by himself, Ihor cleared the majority of the old cemetery during late June and early July, working around midday heat and intermittent summer rain; he finished this hard work last week. Marla, Vasyl, and I visited Rohatyn at the end of last week to review his work with him, and to do a little trimming along the fence and at the road level, to dress the site a bit. We are very pleased with Ihor’s work, especially given the tough conditions following the late seasonal start. We hope we can count on Ihor to make at least one more complete clearing at the old Jewish cemetery for us later this year.

A panorama of the new Jewish cemetery in Rohatyn after clearing. Photo © RJH.

A panorama of the old Jewish cemetery in Rohatyn after clearing. Photo © RJH. 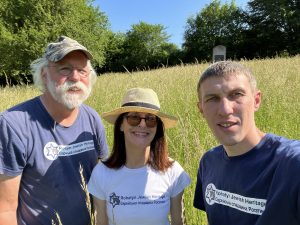 We are looking forward to further work in Rohatyn this year! Photo © RJH.

Even though our visits to Rohatyn must be very limited this year, we have still been able to do more than organize clearing work at the burial sites. Already in the past six weeks, with Vasyl we have commemorated the 1943 Rohatyn Jewish ghetto liquidation, recovered a Jewish headstone fragment embedded in a tree, and met with descendants of a Ukrainian woman from nearby Cherche who sheltered an 18-month-old Jewish girl in her home during the WWII German occupation of Rohatyn. We have also resumed other projects from past years which don’t require frequent travel to Rohatyn; we hope to report on those activities in the next several months.