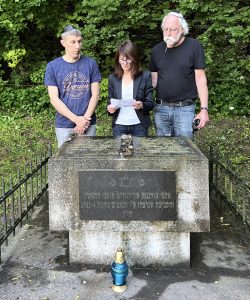 Marking the anniversary with a prayer. Photo © RJH.

After a year and a half of Covid prevented us from being in Ukraine on this date in 2020 and 2021, Jay and I were finally able to be in Rohatyn this year on June 6th to mark in person the anniversary of the final liquidation of the wartime Jewish ghetto, 79 years after that terrible event. Joined by Lviv friend and Rohatyn Jewish Heritage team member Vasyl Yuzyshyn, today I recited El Malei Rachamim (אֵל מָלֵא רַחֲמִים, “God, full of mercy”), a prayer for the souls of the departed and martyred before the memorial at the “vodokanal” mass graves north of the Rohatyn city center – the final resting place for more than 3000 Jewish victims from Rohatyn and the surrounding region, including Burshtyn, Khodoriv, and Bukachivtsi.

We also remembered those who had joined us here in past years’ prayers but are no longer with us today, particularly dear friend and supporter, Mikhailo Vorobets z”l. Mr. Vorobets passed away just over a year ago following a period of declining health, making him especially vulnerable to the effects of Covid. We felt his spirit with us today as we remembered. 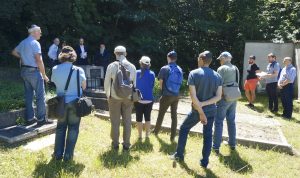 A gathering of friends and supporters at the north mass grave memorial on the anniversary in 2018. Photo © RJH.

Information about the north mass grave site before, during, and after the war can be found on the Rohatyn Jewish Heritage website in both the History and Heritage sections. Additionally, the grave site was professionally surveyed in 2017 and again in May 2019, and it is likely that several grave pits were dug and used here for executions and/or burials of Jews discovered in hiding between the June 1943 events and the end of the German occupation of Rohatyn.

Now that we are back in Ukraine, Jay and I are hoping to resume projects that Rohatyn Jewish Heritage was forced to put on hold due to the Russian war and senseless aggression against Ukraine, now in its 103rd day. May peaceful skies return to Ukraine soon.

And may the memory of the Jewish victims of 79 years ago bind us together.
Baruch Dayan HaEmet.