78 Years Ago – Not Forgotten

Jay and I were unable to stand in person again this year before the memorial at the “vodokanal” north mass grave in Rohatyn to remember the more than 3,000 Jewish victims of the final liquidation of Rohatyn’s wartime Jewish ghetto in June 1943. In our stead and on behalf of Jewish descendants today was Rohatyn Jewish Heritage team member and dear friend Vasyl Yuzyshyn, who honored the memory of those who suffered and perished at the site 78 year ago. Some of those victims of the final liquidation were originally from Rohatyn, but most were from the surrounding area including Burshtyn, Khodoriv, and Bukachivtsi. 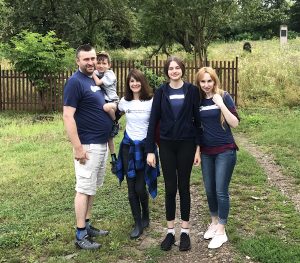 Vasyl was joined by the Vasylyk family of nearby Ivano-Frankivsk (husband Volodymyr and wife Victoria with their children Yaryna and David); they are dear friends with family roots in Rohatyn and long-time supporters of our heritage work. We first met Victoria through Facebook; all four family members then surprised us one afternoon in 2019 at Rohatyn’s new Jewish cemetery. Volodymyr came back several times in 2020 to work alongside Vasyl at the old Jewish cemetery; Yaryna has joined us many times at both the old and new Jewish cemeteries, including as part of a large multi-day American-European-Ukrainian volunteer work event we hosted in 2019. In addition to interviewing Rabbi Kolesnik of Ivano-Frankivsk for a Polish television broadcast, Yaryna created “Jewish Heritage of My Region” («Єврейська спадщина мого регіону»), a YouTube video of her research and participation in Jewish heritage volunteer work in the Ivano-Frankivsk oblast of western Ukraine, including Rohatyn. 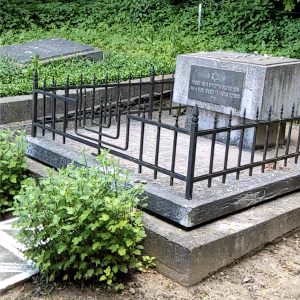 The memorial monument at the vodokanal site today.
Photo by Vasyl Yuzyshyn © RJH.

In 1998, survivors of the Holocaust in Rohatyn and their families erected a memorial at the vodokanal mass grave. That memorial joined a prior, plain memorial that had been erected before Ukrainian Independence, under the Soviets. Today the site is tended by Ihor Zalypko, a local man whom we have retained to do light maintenance on the memorials and grounds including planting of seasonal flowers, tasks previously carried for more than two decades by our late dear friend Mykhailo Vorobets who passed away last month. Already this year Ihor has cleaned and cultivated around the memorials, and planted flowering plants which are growing vigorously now. Although the environment is industrial, the memorials and the grounds around them are being maintained in good and respectful condition. 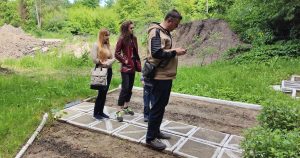 Due to Covid-19, this was the second consecutive year Jay and I could not be present at the north mass grave in Rohatyn to mark this sad and solemn anniversary. We did however light a candle here in northern California and read aloud El Malei Rachamim (אֵל מָלֵא רַחֲמִים, “God, full of mercy”), a prayer for the souls of the departed and the martyrs. We were touched that during the memorial event in Rohatyn today, Volodymyr also read a Ukrainian-language version of the prayer (Господь Милосердний). God full of mercy, grant the victims eternal peace.

Jay and I are hopeful of returning to Ukraine by fall and resuming our heritage work hands-on in Rohatyn later this year.

Today at the memorial site: the Vasylyk family (left), and with Vasyl (right).
Photos by Vasyl Yuzyshyn © RJH and by Victoria Matskevych.