Despite travel and meeting restrictions during the current global pandemic, we are pleased to report this week that volunteers have completed a first round of cutting and clearing wild vegetation at Rohatyn’s two Jewish cemeteries. Unusually wet weather with many days of storm and rain through the spring and summer to date forced the work to extend much longer than usual, even while the heavy grasses and fast-growing shrubs continued to rise, but the volunteers have prevailed and were able to finish the first full round of clearing this week. Marla and I have been frustrated by the ongoing travel restrictions which have kept us away from our home in Lviv, and unable to join the work so far this year, but we are glad that our Ukrainian friends in the area have stepped forward to help so that the vegetation does not run wild as it did prior to our first clearing work in 2018.

The new Jewish cemetery after the first day of clearing work. Photo © RJH. 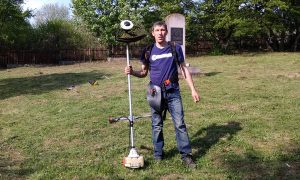 Vasyl with a motor tool in the new cemetery. Photo © RJH.

Leading the volunteers is our long-time supporter Vasyl Yuzyshyn, who picked up about half of the hand and motor tools from our apartment in Lviv, and drove to and from Rohatyn for work each day, either alone or with other volunteers. On several days Vasyl worked a full day by himself – a bit dangerous, but he is quite experienced now as he has joined us to work at all of the sites on every prior volunteer event of the past two years. In addition to operating all of the tools, Vasyl is also skilled at maintaining and repairing the tools, and because he frequently serves as our interpreter during volunteer events all of the cemetery neighbors know and like him.

On other days Vasyl was joined and aided by friends and colleagues who have worked with us at the cemeteries in past years. Joining for two days were Yaryna Vasylyk and her father Volodymyr Vasylyk; Yaryna, a high school student in Ivano-Frankivsk, has a connection to Rohatyn through her father (and her grandmother still lives in the city). Her father, a doctor in Ivano-Frankivsk, and her family have been supporters of our projects for over a year. Yaryna joined us for a large volunteer event in 2019, where she demonstrated a commitment beyond her years in the heavy work of clearing at both Jewish cemeteries. She also created an informational video about the Jewish heritage of the Ivano-Frankivsk oblast, including an interview with Rabbi Kolesnyk, for the 2019/2020 youth competition project of Trans.History, supported by the NGO Centropa. During their days working in the old cemetery in May and June, Yaryna used loppers and shears to cut back fast-growing weeds at the long roadside fence line so that visitors and neighbors can see into the cemetery. Volodymyr used one of the motor tools to work with Vasyl to cut down the heavy grasses and new wild shrubs and trees. We are grateful for the continuing support of these friends of our project!

The Vasylyks working at the old cemetery. Photo © RJH.

Another friend and colleague joining Vasyl for the hard work was Sasha Nazar, head of the Lviv Volunteer Center (LVC) and a key partner to Rohatyn Jewish Heritage – he has organized many large and small Jewish burial site rehabilitation projects in the Lviv oblast and beyond, and provided guidance to us in organizing volunteer heritage events. In 2017 through 2019, the LVC joined us four times to help clear vegetation in the new cemetery, most recently in May 2019, and we have joined them at two of their international work camps, as well as spontaneous headstone recovery work in Lviv. For his long day at the Rohatyn old cemetery a few weeks ago, Sasha brought his own brushcutter (and his extensive experience) so there were three motor tools working at the same time, significantly speeding the work. Sasha joined Vasyl again this week for a hard day in heavy brush to help finish the first pass of clearing at the old cemetery.

Sasha working like a strong machine at the old cemetery. Photos © RJH.

Because the ongoing pandemic forced an early termination of the global Peace Corps Volunteer program, all PCVs in Ukraine were required to leave and return to the US, back in March. As a result, none of the many PCVs who lent a hand in 2018 and 2019 were able to return, and there still remains no opportunity to engage new PCVs to help us spread word about our projects of shared heritage rehabilitation and mutual respect. The strength, spirit, and intelligent problem-solving of the PCVs are missed, but their hard work in past years has made it easier to maintain the cemeteries this year, as we are now mostly managing only new annual growth of wild grasses and plants. We look forward to welcoming new volunteers not only from the Peace Corps but also from other civil society organizations, as well as friends from other European countries who have supported us in the past, once it is again possible to travel in Ukraine without serious health risks.

Several views of clearing progress over weeks in the old cemetery. Photos © RJH. 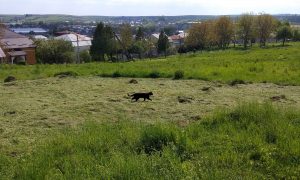 This year it has taken nine days of work spread over more than two months to complete the first clearing sweep of wild vegetation in the two cemeteries. Clearing in the new cemetery only required two days work, by just Vasyl, in part because it was in early May and the vegetation had not yet become especially thick and tough. As progress was made in the old cemetery, interrupted by many days of storms and rain, the vegetation has taken a fierce hold and even four strong people struggled to finish the job. Now of course it will be time to start again at both cemeteries – in fact, after completing the lower end of the old cemetery this week, Vasyl and Sasha started over at the top of the cemetery, to make the east entrance more presentable again. Marla and I guess the rest of summer and into autumn will mean more hard work days, until the weather dries or cools. We are grateful for the tenacity of all of our volunteers.

While the vegetation clearing was in progress over the past two months, other cemetery maintenance and conditioning work also proceeded when needed. Vasyl noted that the invasive and poisonous borshchivnyk plant (also called giant hogweed) has been growing again in both cemeteries, so he used a spade to cut down the plants where he found them, hoping to retard their spread and reduce the risk of injury to volunteers working at the sites. This is a widespread problem in western Ukraine and will of course be a long-term care task for us until we are able to landscape the cemeteries with slow-growth ground cover.

Vasyl also noticed on his first visit to the new cemetery in May that the steel fence had further decayed next to the gate at the front of the site; some sections of the fence then broke apart and collapsed a few weeks later. Fortunately Vasyl is resourceful; he owns a welding rig, so during a short break in the rains in June he visited Rohatyn, made an electrical connection to the house of a friendly neighbor, and then reattached the fence posts and picket sections to the foundation and to each other. Now the life of the aging fence has been extended, and the gate works well again.

Scenes before, during, and after Vasyl’s repair of the new cemetery fence. Photo © RJH.

Tetiana with the headstone fragment in her yard, and the fragment now returned to the old cemetery. Photo © RJH.

Another aspect of our regular work in Rohatyn is continuing this summer without our physical presence: Jewish headstone recovery from around the city. Following the discovery and recovery of several headstone fragments from a cellar in Rohatyn in April, a friend in the city contacted Marla on Facebook to report that she had found a carved fragment in building rubble at her family’s home across the river. Vasyl met with her a week ago and sifted through the pile of odd stones to check if there were any other carved pieces or visible Hebrew inscriptions, then took the one fragment to the old Jewish cemetery to join the hundreds of others we have collected there for safe-keeping. We depend on local people to alert us to these discoveries, and are very grateful that many people in Rohatyn know to contact us when headstone pieces are found.

And it’s not only the cemeteries which are getting attention this year. Like last year, we have contracted with Ihor Zalypko, an engineer at the Rohatyn vodokanal facility where the north mass grave is located, to care for the two mass graves in Rohatyn, and he is doing an excellent job on that, as seen in the photos taken by Vasyl during his periodic visits to each site. Ihor has been cutting grass and wild plants at both sites to clear an area around each of the memorial monuments, and planting small flowering shrubs along the walkways to the 1998 monuments. This has proven to be a good arrangement for us, and we hope Ihor will be willing to continue his work for many years.

Looking forward, as noted we hope the clearing work in the cemeteries can continue, when Vasyl and other volunteers have time. In normal years we try to make three complete passes in the old cemetery and at least two in the new cemetery. This year, because of the high and constant rainfall, we guess there is even more need for clearing, but the weather has also thickened and toughened the vegetation, slowing the work, especially for only a handful of volunteers. Marla and I recognize that it will be important to try to make a full pass in each cemetery near the end of the clearing “season”, so that the cemeteries are in good condition before winter and next spring won’t start with old difficulties. With some luck and some progress in control of the pandemic, we hope to be back in Ukraine to join that work later this year.

Never-ending growth: the east entrance to the old cemetery, seen before and after the first day of clearing in May (left and center), and after weeks of sun and rain, in July (right). Photos © RJH.