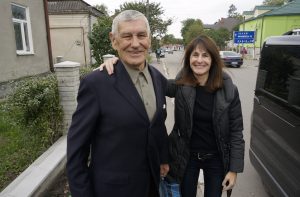 It is with tremendous sadness that we report on the passing today in Rohatyn of Mykhailo Vorobets, retired teacher, author, local historian, and carrier of memory of the city’s prewar Jewish families and their history. Having contracted COVID-19 last November, Mr. Vorobets was confined to bed for most of winter. In late April, our friend Vasyl Yuzyshyn was in Rohatyn checking on the four Jewish burial sites for us and he visited Mr. Vorobets, finding him weak and very thin. Mr. Vorobets would have been 87 years old in June. 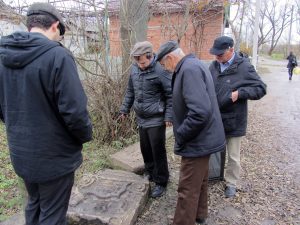 Despite troubling health issues during the past several years, Mr. Vorobets continued to write a regular history column for the local newspaper “Voice of Opillya” (Голос Опілля) and when possible speak to students about the prewar Jewish community, the Holocaust, and the importance of memory.

We first met Mr. Vorobets in April 2011 on our second visit to Rohatyn. Jewish descendants of Rohatyn families will recall that Mr. Vorobets not only attended the 1998 dedication of new memorials erected at all four Jewish burial sites in Rohatyn, but was a key contributor to the realization of this important post-war, post-Soviet effort to remember the Holocaust in Rohatyn and memorialize the Jewish victims.

For years thereafter, Mr. Vorobets continued to personally care for the burial sites: cleaning and lightly repairing the monuments, planting seasonal flowers, clearing garbage, and most importantly, arranging for the recovery of Jewish headstone fragments found outside the cemeteries (see the web links below to read more). Our recovery work and historical research as Rohatyn Jewish Heritage began with our initial April 2011 meeting with Mr. Vorobets at the Rohatyn Public Library, resuming and building upon efforts that Mr. Vorobets and others had made in the past. 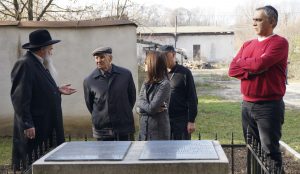 With Rabbi Kolesnyk and heritage activists at the north mass grave in Rohatyn in 2014. Photo © RJH.

Until the end of last year, Mr. Vorobets continued to be the local contact point for Jewish descendants abroad seeking information about their families or planning to visit Rohatyn. He was also the key organizer for a memorable reunion we attended in Rohatyn with the descendants of a Jewish wartime survivor and a Ukrainian righteous local man. Mr. Vorobets could regularly also be found at the offices of the Opillya regional history museum in Rohatyn, researching and serving as local historian for staff and visitors, and he contributed items from his personal collection to the museum’s exhibition. 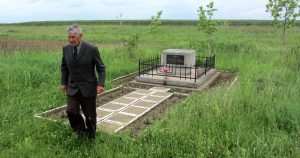 During one of our summer volunteer clean-up camps at the Jewish cemetery, Mr. Vorobets came and spoke to American and Ukrainian volunteers, and continued until recently to be the contact point for Rohatyn residents who found Jewish headstones outside the cemetery; he often then arranged for the return of the stones to the Jewish cemetery himself or joined us for the recovery. For many years, Mr. Vorobets stood with us at the north and south Jewish mass graves to solemnly mark sad anniversaries of wartime executions of Jews, the last time being June 2019. Rohatyn Jewish Heritage created a page dedicated to Mr. Vorobets’ memories of what he saw at the south mass grave days after the mass executions there in March 1942. 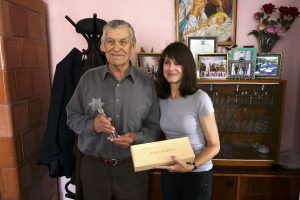 In fall 2018 on our initiative, Mr. Vorobets was recognized by the City of Lviv for his decades of work in recovering Jewish memory and heritage in Rohatyn.

Mykhailo Vasylovych Vorobets was born in the village of Verbylivtsi (pre-war: Wierzbołowce), only 2km south of the Rohatyn town center, and moved to Rohatyn when he was young for a life of work and volunteer service. He was predeceased several years ago by his wife, but leaves children and other family in Rohatyn and the region. Following a memorial service at the Saint Mykola church on the hill above Rohatyn’s city center, next to the old Jewish cemetery, Mr. Vorobets will be buried at the historic Christian cemetery to the southwest, not far from the Turkish WWI soldiers’ memorial and the Rohatyn Jewish south mass grave from 1942. Unable to attend the service ourselves due to the pandemic and our continued absence from Ukraine, we are grateful to Vasyl who will be there on our behalf and on behalf of all descendants of Jewish Rohatyn, in respect.

May his soul be bound in the bond of everlasting life.
Нехай його душа буде зав’язана у Вузол Життя.