Two meetings in the past ten days have helped us make a formal start on our effort to better preserve and protect the Jewish cemeteries and Holocaust mass graves in Rohatyn. At present, none of the cemeteries or mass grave sites in Rohatyn are recognized as objects of regional or Ukrainian national heritage, and thus the four sites lack formal protection under the heritage laws now in force. Fortunately all of the sites are informally recognized by City leaders and residents, and all are respected as burial grounds, but for some current issues and for the future we believe official registration and recognition is needed.

During the meeting at the Rohatyn City Office. Photos © 2018 Marla Raucher Osborn.

The first of the meetings was held at the Rohatyn City Mayor’s office on Monday, July 16, with Rohatyn’s Deputy Mayor Mykola Shynkar. Marla and I attended with our NGO’s board member, legal counsel, and long-time adviser Wito Nadaszkiewicz, who in recent months has been researching the Ukrainian national and regional statutes and administrative processes for registration of heritage sites; he already has relevant experience in the registration of buildings. 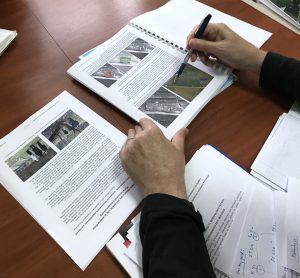 Some of the documents under discussion. Photo © 2018 Marla Raucher Osborn.

Our primary purpose for this meeting was to formally deliver two copies of the complete report on the non-invasive archaeological survey we commissioned last year at the Jewish mass grave sites in Rohatyn; the report is now fully translated into Ukrainian language. During the meeting we summarized the main results of the survey, noted an important update from early this year; and discussed some ways in which protection and commemoration for the grave sites may be enhanced, including a few concepts we have been considering after witnessing the cycle of seasons, wild vegetation growth, as well as man-made issues at both sites. The discussion was open and productive; the Deputy Mayor invited Rohatyn Jewish Heritage to propose specific requests and recommendations to the City Council, and offered to support the recognition and registration of both Jewish cemeteries and both Jewish mass graves as heritage sites. Mr. Shynkar acknowledged that the City of Rohatyn has not had prior experience with heritage site registration (a process which is typically initiated at the oblast level of government), and told us that the City would welcome the process guidance our effort will likely produce.

The second meeting was on the following Monday, July 23, with Meylakh Sheykhet in his offices in Lviv. Mr. Sheykhet is Ukraine Director of the Union of Councils for Jews in the Former Soviet Union (UCSJ), as well as Director of the Faina Petryakova Scientific Center for Judaica and Jewish Art, and probably has more direct experience than anyone in the research and protection of Jewish cemeteries, mass graves, and religious buildings in western Ukraine. Mr. Sheykhet outlined for Wito, Marla, and me the normal sequence of administrative steps necessary to gain official site registration, some recent changes in processes and rules at the national level, and some important issues which will likely impact our applications and their reception. 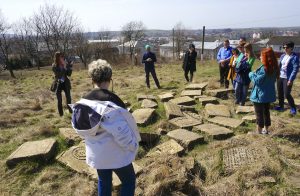 For the two Rohatyn Jewish cemeteries, Mr. Sheykhet anticipated no insurmountable issues, but cautioned us to make sure the technical descriptions of the sites are backed by Ukrainian archive data and, if necessary, new data developed by recognized Ukrainian experts in cadastral surveying, etc. The degree of difficulty in this effort will depend in part on the quality of surviving archival records from pre-war and post-war administrations.

For the two mass graves, there is an additional issue: Mr. Sheykhet advises that the national heritage administration does not accept non-invasive archaeological data (e.g. from ground-penetrating radar) in support of registration applications. This is of course a problem for any Jewish grave site, as Jewish religious law (halakha) forbids excavation over graves of any kind, so that common archaeological verification methods which the heritage administration would accept are not possible. In fact, none of Mr. Sheykhet’s applications for Jewish mass grave registration, which are complete from a scientific and records perspective but conform to halakhic law through non-invasive research techniques, has ever been accepted by the national authorities. 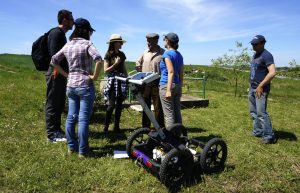 Mr. Sheykhet gave us a good suggestion to strengthen our application: to include sworn and notarized testimony from Rohatyn elders who were had seen one or the other of the mass graves at the time of the wartime executions or soon after. A minimum of three witnesses for each grave was recommended, which will be difficult to achieve now so long after the war, but we know for example that our long-time supporter Mr. Vorobets was a witness after the killings at the south site.

Retrieval of bones from the ground surface for reburial at the south grave site.
Photo © 2017 Marla Raucher Osborn.

In discussion after the meeting, we realized that it may also be useful to record testimony of witnesses to human remains unearthed when the ground was disturbed at both sites in the past few decades; we and several others, including Rohatyn’s Mayor, can attest to these sightings as first-hand witnesses.

After the first meeting, Wito prepared letters from our NGO to the Rohatyn City Council and to the Ivano-Frankivsk Oblast with our request to pursue formal registration of the four heritage sites; he mailed those letters immediately after the second meeting. We understand from our meeting with Mr. Sheykhet that the application and review process can be quite long (years) and sometimes frustrating, but permanent protection of the sites requires that we start this effort now. We will report any significant news as the effort proceeds, here and in other forums.

Separately, we are also now researching through Wito’s contacts in Lviv and the region to identify one or more candidate landscape architecture firms which we may engage to develop design concepts and costed plans to mark and protect the south mass grave site. If the results meet our expectations, we will begin considering concepts for the north mass grave site next year. Progress on this topic will be reported on the mass graves project page of our website.

We thank Mykola Shynkar for his advice and cooperation on behalf of the City of Rohatyn; Meylakh Sheykhet for offering his experience, advice, and connections on the legal and administrative processes of site registration; Wito Nadaszkiewicz for his research, strategic planning, and formal communications on behalf of Rohatyn Jewish Heritage; and Viktoriia Sergiienko for her hard work in translating the lengthy and complex archaeology report into Ukrainian for local use.