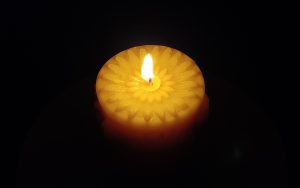 A candle in commemoration, one of many lit around the world today and on the yahrzeit. Photo © RJH.

Today we were supposed to gather with friends and colleagues from Rohatyn, Lviv, and elsewhere in Ukraine and Europe, and together with Jewish descendants of Rohatyn from Israel and the US, for a memorial service led by Rabbi Kolesnyk of Ivano-Frankivsk to mark the 80-year anniversary of the German Nazi destruction of the Jewish community of Rohatyn, as we had on the 75-year anniversary. But war, another war, prevented Jay and me from returning to Lviv last month after a short visit to California, and we had to cancel the memorial gathering in Rohatyn for the safety of all those who had wanted to join. This year, like last year at the height of the Covid-19 pandemic, we all marked the anniversary wherever we were. Jay and I bore witness this year remotely, saying a prayer for the souls of the martyred victims in my own family and the families of all Rohatyn Jewish descendants abroad. We know from messages that others also commemorated the day in North America, South America, Europe, and Israel.

This is a time of terror in Ukraine, with echoes of past wars which devastated Rohatyn and nearby towns and brought horror to all of the people of the region. The simmering war which began in 2014 with the forced annexation and occupation by Russia of the Crimean peninsula and other Ukrainian territories in the eastern oblasts erupted last month into a full-scale armed invasion across nearly all of Ukraine. Anyone who has studied the effects of past wars on Rohatyn, the region, and the people who lived there now shudders with recognition at new images and reports of the same kinds of destruction and the slaughter of innocents, again.

Battles in the first month of the World War I in Rohatyn and other towns of its district inflicted widespread damage and reduced the center of Bilshivtsi to a heap of ruins. After occupying Rohatyn for less than a year, retreating Russian imperial troops forcibly deported more than 500 Jewish men into Russia, and then burned most of Rohatyn to the ground. This week in several eastern and southern Ukrainian cities and smaller towns, news reports and video show Russian military units doing the same things to Ukrainian civilians, their homes, and their neighborhoods.

Rohatyn still lives with the legacy of World War II, the Soviet and Nazi occupations, and the Holocaust: the shadows of the murdered Jews, deported Poles and other minorities, shattered physical heritage and lives. Now in some cities in Ukraine, we see the same targeting and destruction of residential buildings, hospitals, markets, and schools with the innocent people inside; millions of refugees displaced within Ukraine and beyond; the Russian military blocking and firing on humanitarian caravans with people, food, and medical supplies. Civilian deaths outstrip the ability of local services to recover and bury the victims; now mass graves gather the dead again, like 80 years ago. Satellite images of Ukrainian towns flattened by Russian artillery appear hauntingly like aerial photos of Rohatyn’s Jewish ghetto after its liquidation by fire in 1943.

Aerial views of Rohatyn’s burned former Jewish ghetto in 1944 (at left), and the ruined city of Volnovakha in southeastern Ukraine one week ago (at right). Sources: NARA via Alex Feller and Maxar Technologies.

Offsetting immense sadness, we are grateful that so far all of our closest friends and colleagues in and near Lviv and Rohatyn are physically safe, though under duress. Many are working to shuttle supplies and refugees, in between sheltering in cellars and basements during alerts, and preparing for the greater storm to come in western Ukraine. With each passing day, their lives become more precarious, and several of them have already sent family members over borders to relative safety. Jay and I remain in contact via multiple message and media services with many of our Ukrainian friends and colleagues still in the region, several on a daily basis. Like many others outside of Ukraine, we work each day to communicate and coordinate aid, to donate to humanitarian services and to the Ukrainian territorial defense, and to encourage our friends who are despondent over the madness and their future. 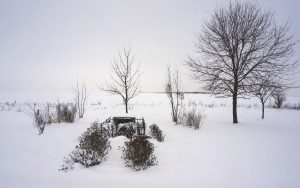 The south mass grave site in Rohatyn during our last visit, in December 2021. Photo © RJH.

Our own lives and work are now disrupted by the war as well. Our apartment in Lviv where we have lived for more than five years is now home to a refugee family from Kharkiv, still with the clothes, tools, and more we left behind two months ago for what should have been a brief trip to the US. Jay and I have no other home; since the war erupted we have been staying with friends and family and in short-term rental units in California. Our heritage work in Rohatyn and in support of others’ projects in the region is of course on indefinite hold. To date there have been no severe impacts to Rohatyn, only an influx of refugees which has grown the city’s population by 20% in just three weeks. We have no idea when, or even if, we will be able to return to Lviv and resume our lives and work.

This has been one of the hardest reports I have ever had to write for Rohatyn Jewish Heritage.

For those wishing to support Ukrainians and Ukraine’s independence with humanitarian aid, I have posted dozens of options on social media and will highlight one organization here which has managed multiple initiatives in past years and is especially effective now:

…as well as a “super site” which aggregates many financial and volunteer options and organizes them by country:
https://how-to-help-ukraine-now.super.site/

God full of mercy, grant the innocent victims of all of these wars eternal peace, and watch over our friends and colleagues in Ukraine.