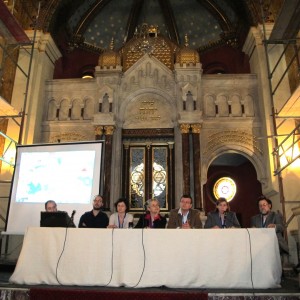 The conference setting and a panel of experts. Photo © 2013 Marla Raucher Osborn.

This year’s conference had approximately 90 participants from 20 different countries. The focus was on Jewish preservation projects, challenges, and strategic thinking, and also on how to unite “experts” in these fields with Jewish descendants groups who wish to start or continue on-going preservation projects but lack the know-how, contacts, and funding to proceed and/or fulfill their goals. The conference was convened by the Rothschild Foundation (Yad Hanadiv) Europe, the David Berg Foundation, the Cahnman Foundation, the American Jewish Joint Distribution Committee and the World Monuments Fund, in cooperation with the Foundation for the Preservation of Jewish Heritage in Poland, the Jewish Community Centre in Kraków, the Galicia Jewish Museum in Kraków, the Taube Foundation, and the European Council of Jewish Communities. The U.S. Commission for the Preservation of America’s Heritage Abroad also had a presence. 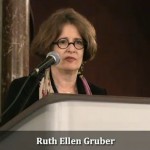 In early January 2013, I had coffee here in Paris with Ruth Ellen Gruber (creator and administrator of the Jewish Heritage Europe website). It was then that I first heard about the conference and the Bratislava Statement. When I went back to our apartment, I went to the internet to read the full text of the Statement. How well-stated! I knew I needed to attend and talk about our group!

It subsequently became clear that Ruth had invited me because I am a “hybrid” – a cross-over individual: a passionate genealogist AND preservationist. I am not an expert on Jewish heritage preservation but I am an advocate for its place in the world of Jewish genealogy.  I also know firsthand the discouragement that can set in when an individual or a group feels overwhelmed by projects too large, too expensive, and too far away to even start, let alone manage and see to completion. All of us are intimately familiar with these feelings.

Our group has numerous on-going Jewish heritage projects in Rohatyn, as you know, including a Jewish headstone recovery project which has grown in size and complexity over the last few years. The practical issues and financial considerations faced by us are typical of other Jewish descendants who seek to memorialize their town’s pre-War Jewish population and perhaps contemplate someday acquiring surviving buildings of Jewish significance.

I strongly believe that the Jewish headstone recovery project could not have been possible without the support of the local (non-Jewish) Ukrainian community of Rohatyn of today. This issue – the involvement and support of the present-day community in the recovery and maintenance of Jewish heritage – was a recurrent theme among the presenters at this year’s conference. 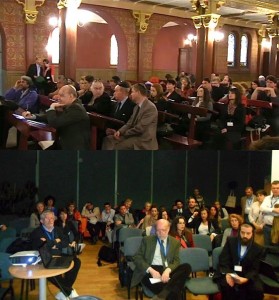 As I had hoped, the conference provided numerous opportunities for attendees and participants to meet one another, learn about projects, and share information.  It is also anticipates that one important outcome of the conference will be the recognition and development of Ruth’s Jewish Heritage Europe website as a clearinghouse of information, events, organizational links, and experts in the fields of preservation to whom groups like ours can turn for advice and guidance: whether on large issues of Jewish heritage preservation (such as how to design and develop memorial walls, restore buildings, and work with local administration), or on small, practical issues, like how best to store headstones that remain exposed to the elements – face-up or face-down – while awaiting decisions on how to use them in a memorial.

For our group’s projects and needs, I wish I could report that I found concrete answers and found aid for our many projects.  Regrettably, I did not, at least not yet.  The vast majority of resources and groups that were represented at the conference were EU-focused with little or no involvement in Ukraine, and while I made some contacts with a few people who may be able to lead me/us to others that might be useful, my confidence is low.  I will certainly pursue a few of these via email in the weeks and months and keep you posted. 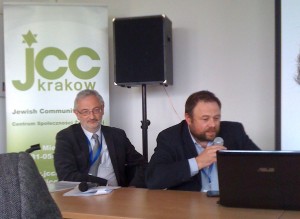 Thereafter, attendees heard and participated in two panel discussion workshops, one on methods, models, challenges, possibilities of the physical restoration of sites of Jewish heritage, and the other on the usage of new technologies and methods in researching, preserving, protecting, and displaying Jewish historical sites (digitization; documentation; scanning technologies; databases; mobile apps, etc.).

That evening there was a reception dinner held at the nearby wonderful Galicia Jewish Museum, which catered the best kosher meal I have ever had. 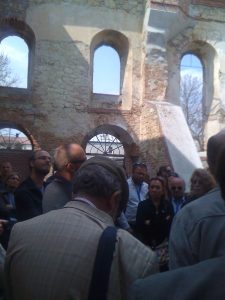 The following morning’s schedule started early with a day trip to visit restored synagogues in the Polish towns of Chmielnik and Działoszyce. Chmielnik is a small town of 4,000 people that before the Holocaust was three times bigger and about 80 percent Jewish. The massive masonry synagogue, originally built in the 1630s, was turned it into a warehouse by the Nazis and stood neglected or empty for decades. The interior has barrel vaulting and retains stucco work dating from the 18th century, as well as traces of polychrome decoration, including frescoes of lions, neoclassical geometric forms, and signs of the zodiac. Thanks to a civic initiative dating back more than 10 years, the synagogue has undergone restoration and will open in June 2013 as a Jewish museum. There we also met with the local historian and activist Piotr Krawczyk, who has led this project as well as the restoration of the Jewish cemetery in Chmielnik. In contrast was our next visit: to Działoszyce, a small, economically troubled town which has a neoclassical synagogue designed by Felicjan Frankowski built in 1845. This synagogue has stood as a roofless ruin for decades. It has been preserved as a ruin, serving now as a monument. 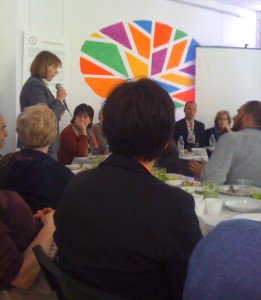 Returning that afternoon back to Kraków, the conference resumed with presentations by various people, including Monika Krawczyk, the CEO of the Foundation for the Preservation of Jewish Heritage in Poland, Eleonora Bergman, former director of the Jewish Historical Institute, and Albert Stankowski, founder of the Virtual Shtetl portal of the Museum of the History of Polish Jews.

That evening, the focus moved to Jewish cemeteries with a panel led by Poland’s Chief Rabbi Michael Schudrich, and covered issues of documentation and physical restoration, aesthetics of restoration, and the important role of volunteers in cemetery preservation and maintenance.

Round-table informal discussions continued into the night on these issues and the events of the day, following a dinner at the JCC. 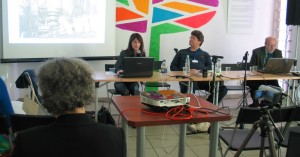 The focus of the conference’s third and final day was on “Development, Funding, and the Future” structured again with two panel discussion workshops. One workshop (entitled “Community”) was on the role of Jewish physical heritage and heritage sites vis-a-vis present Jewish communities, and discussed successful projects as well as different interpretations and opportunities for community involvement. The other workshop (entitled “Society & Outsiders”), focused on the role, use, and promotion of Jewish Heritage sites for the general public. I was asked to present at this second group as it primarily focused on balancing local priorities and resources with demands and desires of religious pilgrims, landsmanschaftn, genealogists, and tourism. I spoke and presented a dozen slides on our group and its projects in Rohatyn as well as the issues, controversies, constraints, and hurdles we continue to face as a private, self- funded, and geographically remote Jewish descendants group composed of heterogeneous members located in several different countries. 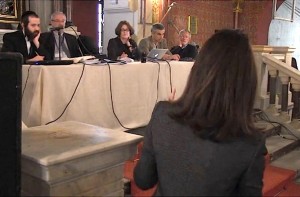 The conference concluded with an interesting panel-and-audience discussion on the feasibility of creating an “ask the experts” Jewish Heritage Task Force, something I believe our group – and other Jewish genealogy and descendants groups – would welcome for help and guidance in pursuing and realizing current and future preservation projects in our towns.

This is the link to the Jewish Heritage Europe website, where you can read the full program and view three filmed plenary sessions held in the beautiful restored Tempel Synagogue next door to the JCC in Kraków:
http://www.jewish-heritage-europe.eu/focus/conferences/working-seminar-jewish-immovable-heritage

To read other web reports by participants and observers of the conference:
http://www.jewish-heritage-europe.eu/2013/04/28/reports-on-managing-jewish-heritage-conference/%E2%80%9D

A number of photos are attached, and for those of you on Facebook, you can find more on my Facebook page.

Warm regards to all and back home tonight in Paris,
Marla