Two ‘new’ Jewish headstone fragments have been recovered since our last post; one had already been taken to the old Jewish cemetery in Rohatyn, and we were able to lift and transport the other ourselves as part of our usual review of the Jewish heritage sites in town today. We also visited the locations which produced the 50 matzevot fragments reported to us by a local Rohatyn journalist in July.

On vul. Drahomanova, at the roadside where many stone pieces were extracted, and the drive which yielded the intact pink granite matzevah. Photos © 2016 Jay Osborn.

Those locations were at vul. Drahomanova 23~25 and vul. Zavoda 10A; both are areas which have yielded headstone fragments in the past. On Drahomanova, while we have previously recovered stones from the river side of the roadway, the verge on the residential side has long been a focus of Mr. Vorobets’ attention, and the exploratory excavation he arranged in this location (after consent by the house’s resident) yielded 30 to 35 stone pieces in July. The largest of those stones, an intact pink granite matzevah belonging to a woman named Chana of the Nagelberg family of Rohatyn, was pulled from under the entry drive of the house at the street edge. Mr. Vorobets arranged and paid a tractor owner to transport the stones; the excavation and lifting was organized with his leadership by a local unemployment agency, who paid the laborers for their time and spared us the expense. We plan to meet with this agency on a future visit to learn if we can cooperate further for mutual benefit. 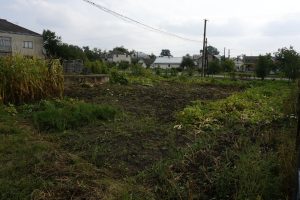 The garden on Zavoda, where the owners have assisted with the recovery of many large headstone fragments. Photo © 2016 Jay Osborn.

The Zavoda location was the site where four large and ornate stones had been dug out and cleaned by the landowners during our visit in May of this year. The owners, who have been renovating a large kitchen garden there, continued to remove additional stones (a total of 20~25) during the subsequent weeks; those stones were moved at the same time as the group on Drahomanova.

The results of this work were reported in local newspaper Газета Голос Опілля (The Voice of Oppilia) by journalist Olga Verbiana, a Rohatyn resident and a former student of Mr. Vorobets. We met Olga today for a visit to several of the Jewish heritage sites in town, and during our discussions she told us that another small fragment had been discovered in town; she showed us a photograph of the fragment on her mobile phone, and later we found that stone in the old cemetery.

Left: Olga’s phone shows the small fragment where it was discovered; right: the fragment now at the old Jewish cemetery. Photos © 2016 Olga Verbiana and Jay Osborn.

Events like this are common in our visits to Rohatyn, and we are grateful for the local initiative to report findings to Mr. Vorobets and to arrange delivery of the stones to the cemetery.

We had another typical experience today while walking the northern mass grave memorial site with the Mayor and Deputy Mayor of Rohatyn, discussing our plans for a non-invasive archaeological survey of the grave boundaries. Workers at the city facility pointed out a recently discovered headstone fragment; with the aid of friends Ihor Klishch and Vitaly Shkurko plus one of the city workers, we were able to load the stone into Vitaly’s van and deliver it to the old cemetery.

The larger fragment at the City yard, in the van, and returned to the cemetery. Photos © 2016 Marla Raucher Osborn and Jay Osborn.

The total number of headstone fragments recovered to the cemetery over the past five years now numbers over 500. Our map of the recovery locations on the headstone recovery project page has been updated with locator pins for the July discoveries on Drahomanova and Zavoda. We know we are still in the early stages of this project, and we expect it to continue for many more years.