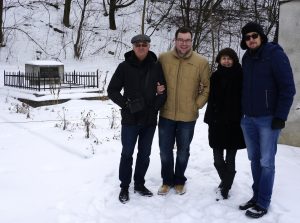 Here is a brief status update on the several Jewish heritage projects active in Rohatyn, from the town visit Marla and I made yesterday with friends and colleagues from Lviv. Joining us on this visit were our longtime supporter and adviser Alex Denysenko, who also served as interpreter for several of the meetings; Alexander (Sasha) Nazar, head of the Lviv Volunteer Center (LVC); and Dmytro Hural, partner at Law Craft LLC. Both LVC and Law Craft are working with us to support the mass graves survey scheduled for spring, as well as other projects in education and in networking with heritage programs in the region.

In Rohatyn we were met as always by Mykhailo Vorobets, the retired school teacher who continues to manage the headstone recovery work in town and to preserve the history of multi-cultural Rohatyn through research, writings, and social work. Together, we visited all of the project sites in town plus an additional site now under further study.

A key focus of the day’s effort was review and support of the planned non-invasive survey of the Rohatyn Jewish mass grave sites to the north and south of the city center. In addition to visiting the sites with our colleagues, we also met again with the Rohatyn City Mayor, Deputy Mayor, and other City staff, primarily to confirm the topics we discussed in September and the scheduled dates of the survey work in town. We also discussed some additional details such as accommodations for the archaeology team from the UK, support services for the survey equipment, etc. The City again reiterated its intent to cooperate with and support the survey work in any way they can. 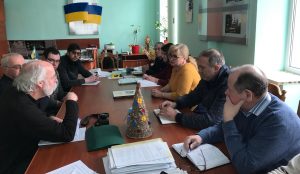 On the important topic of permissions for access to walk on private properties during the technical work, Dmytro expressed our wish to explain the planned work, formally request permission, offer compensation if vegetation will need to be cut to enable the scanning, and to make ourselves available for Q&A if property owners and other citizens have any questions about the work. The Mayor explained that the City can adopt the project and take formal steps to support it, including working directly with local landowners, if we present our plans and requests in a letter which they can present to the City Council. Dmytro promised to prepare that letter soon. 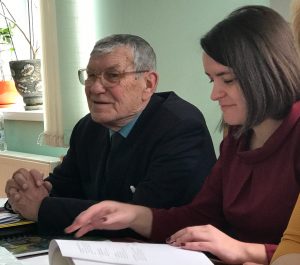 In the meantime, the Mayor said that in their preliminary discussions with property owners about our project, there is already general support in the community. The Deputy Mayor pointed out that it is too soon yet to consider impacts to fields and gardens from the pre-survey clearing work; the actual status of the fields and other property will be better known in spring. Our letter to the City may also help local businesses and residents reduce planting in the affected areas, which would minimize the impact of our work.

Our interface with the City will be enhanced by the designation of Olha Maletska as our primary contact for ongoing tactical and strategic work. Olha is the Director of the Opillya regional history museum in Rohatyn, and most recently joined us at a roundtable on regional Jewish heritage preservation in Lviv. She is a graduate of the prestigious Ivan Franko National University of Lviv, with a focus on the interwar history of the Jewish communities of western Ukraine. We are looking forward to working with Olha on the details of the survey project, and we hope also on a variety of educational efforts linked to the museum this year and beyond. 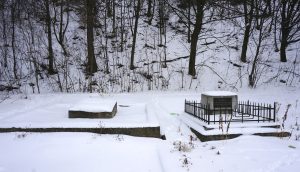 Outside of the meeting, we and our colleagues visited the two known mass grave sites to review their status. The memorial markers remain in good condition, now with a light layer of snow. A helpful discovery for us was that mid-winter has taken nearly all the grasses, leaves, and small shrubs and vines from the northern site (at the city materials yard), making it easier to see the bare steel structures of the greenhouses and their foundations. We will forward photographs of this site, which has previously been rather obscured by vegetation, to the archeological team for their pre-visit review.

The southern mass grave memorial in a sea of snow. Photo © 2017 Jay Osborn.

At the southern site, all of the fields were covered with snow as far as the eye could see, but the scene was peaceful and the memorial monuments stood in sharp contrast to the bright snow. While at the site, Mr. Vorobets noted that it will soon be 75 years since the murder of more than 3000 of Rohatyn’s Jews there on March 20, 1942, and we discussed with him the possibility of joining a lecture he hopes to give to Rohatyn students on that day. We will follow up and see how we may be able to help with that event.

Both Jewish cemeteries in Rohatyn are dormant now; apart from our group, based on footprints in the snow, the only recent visitors have been birds and other small animals. Nearly all of the fallen matzevot and recovered headstone fragments in the old cemetery were covered with a light blanket of snow, which we did not disturb, but we could see glimpses of a few of the many symbols and epitaphs we have documented and described in the past. In the new Jewish cemetery, trees protected the few standing stones from most of the snow. This was the first time we have visited Rohatyn in winter, and it was wonderful to see the quiet repose of these places of memory. 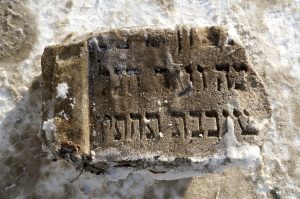 As the cold weather has stopped earth work by both the City and its residents, fewer headstone fragments are surfacing for recovery to the cemeteries; we have seen this pattern each year. Since our last visit in September, only one fragment has been reported to Mr. Vorobets. This fragment was delivered to him by bicycle, by a Rohatyn man who had found it on his property in the Zavoda area across the Hnyla Lypa river from the town center; this area has been a continuous source of stones since our first several visits to Rohatyn in 2011.

Mr. Vorobets held the fragment at his house until our arrival yesterday. After meetings with the City administration and with educators in town, we stopped at Mr. Vorobets’s house to collect the stone. Sasha placed the stone at the ohel in the old Jewish cemetery in the afternoon when we visited that site together. 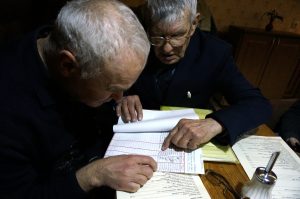 As always, we reviewed the project accounting with Mr. Vorobets during the day. With the final expense of 30UAH (about one US dollar) to clean the latest stone, our tracking matches that of Mr. Vorobets. In total for 2016, Rohatyn Jewish Heritage spent 3445UAH (about $135 at 2016 exchange rates) for recovery and transport of about 60 headstone fragments, some very large. A significant portion of the labor was donated by a local employment agency; funds to cover all the other costs were donated by us and by friends and supporters of our program.

Accompanied by Olha and her museum Deputy Director Vasyl Serdyuk, we also made an unscheduled stop at the administration building south of the city center (now numbered vul. Halytska 40) to get a first look at the basement, which is currently undergoing repairs and renovation. The building, erected in the 1930s, served various government purposes before and after the war, and was one of the German government centers during the Nazi occupation of 1941~1944. Jewish survivors of the war in Rohatyn visited the site during the 1998 memorial visit, and we have also visited the building during several of our own past visits to Rohatyn since 2011, though previously we have only seen the outside and the building’s ground-floor lobby. 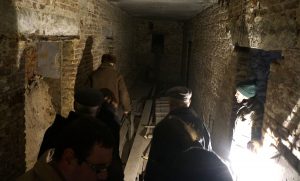 The site now has renewed interest in Rohatyn because of the story of a righteous Ukrainian who protected thirteen Jews in the basement, nine of whom survived the war. The history of these events has been documented in the Yizkor book for Rohatyn, on page 321 of the original, under the heading “The Story of a Bunker”.  Past reports identified the watchman who persuaded the Germans not to enter the cellar as a man named Bruduvay from the nearby village of Putyatyntsi, a few kilometers to the south. Previously, no further information was available about the man, though the Yizkor book urged that “this Gentile should be well remembered”. 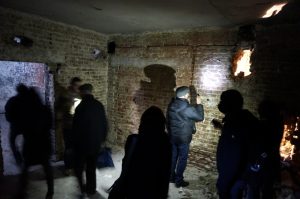 A descendant of one of the Jews saved by this Ukrainian have again been trying to locate the family of the righteous man, and have contacted a number of historians and researchers in the region. Through the Mayor’s office of Rohatyn, Mr. Vorobets received an email from Batya Kidron in Israel, daughter of Sarah Rokeach, one of the nine people saved in the basement, seeking information. By chance, Mr. Vorobets is related to the Brodoviy family of the region, and in the 1960s his cousin Panteleimon (Panko) Brodoviy of Babukhiv (near Putyatyntsi) told him parts of this story while they were co-workers. Panko Brodoviy and his wife Anna have since passed away, so Mr. Vorobets is working with their descendants and other sources to try to verify the connection. We offered to try again to find corroborating or additional information from anyone in the Rohatyn District Research Group (RDRG) who may have memoirs or other documents which could help to better identify the Ukrainian man and his family. There are several stories of Ukrainians aiding Rohatyn Jews in the memoirs by Jewish survivors of the Shoah in Rohatyn, but to date there are none of those people are listed among Yad Vashem’s database of Righteous Among the Nations. Ukraine figures prominently in the database; we would welcome any information which could help to document the Bruduvay/Brodoviy name or any others.