Marla to Receive Fulbright Grant for Heritage Project in Rohatyn 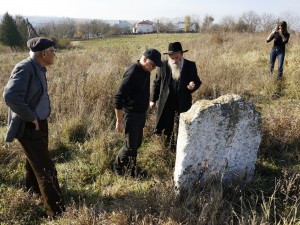 I am proud and excited to report that Marla has been selected to receive a Fulbright scholarship grant for the 2019-2020 academic year, to support a heritage project at the old Jewish cemetery in Rohatyn. The grant will enable research and planning for rehabilitation and commemoration at the cemetery site, networking and educational exchanges with academic and cultural institutions in western Ukraine, and the development of methods and best practices in sustainable regional cemetery work for publication on web portals and in other formats. We anticipate that this focused project beginning in September will accelerate our efforts to raise awareness of the Jewish history and heritage of Rohatyn, and amplify the impact of our work in the region.

The prestigious Fulbright Scholar Program is an intercultural exchange, diplomacy, and competence program managed by the US Department of State’s Bureau of Educational and Cultural Affairs. Grants are awarded each year to US scholars and researchers for teaching and/or research projects conducted abroad, and to foreign scholars for projects conducted in the US; the exchange of people and knowledge is the primary means for advancing the Program’s goal of improving intercultural relations. Marla’s project will be jointly administered by CIES/IIE in the US and Fulbright Ukraine in Kyiv. 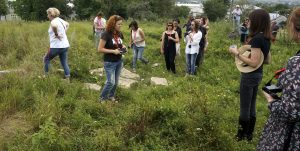 The old cemetery as an education point, here with a Rootka-led tour. Photo © 2017 RJH.

Marla’s project is titled “A Jewish Cemetery Preservation Demonstration Project for Western Ukraine”, and is centered on securing and protecting the almost 400-year-old Jewish cemetery in Rohatyn. As described in the project statement submitted as part of her grant application, with guidance and advice from local experts she proposes to: 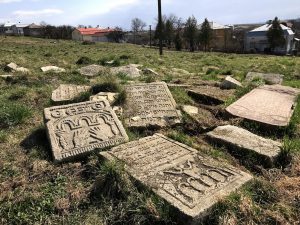 Some of the hundreds of recovered matzevot in the old cemetery. Photo © 2019 RJH.

Preliminary work on the first two goals is already in progress ahead of the formal start of the Fulbright project, and an initial concept exists for a portion the third goal, although we expect each of these efforts to develop and mature significantly over the course of the project. Individual phases of the project include a conservation and documentation plan for recovered headstone fragments as well as the design of informational signage for the site, both already part of our long-term goal of helping to re-integrate shared memory of Rohatyn’s former Jewish community into the modern life of the town. Major landscaping and memorial installation work is outside the scope of Marla’s Fulbright project, but we hope that the plans and designs output from the project will be sufficiently detailed to permit a practical cost estimate for that work, in order to begin fundraising in the latter part of 2020. 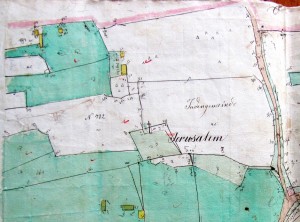 Initial encouragement for Marla to apply to the Fulbright Program came from numerous current and former Fulbright scholars and students with projects in Ukraine with whom we have met in Lviv over the past few years. Significant guidance in structuring the project and shaping feasible project outcomes came from our personal friends and leaders in the heritage field: Dr. Sofia Dyak, director of Lviv’s Center for Urban History of East Central Europe and a vigorous advocate of public history; Ruth Ellen Gruber, coordinator of the Jewish Heritage Europe web portal and an award-winning journalist, author, and researcher; and Professor Rachel Stevens, an artist specializing in sculpture at New Mexico State University, who as part of a Fulbright project in Ukraine in 2018 developed an art and memory installation at the Lviv Center entitled “A Key to the City: Three Ways of Visualizing Jewish Heritage in Lviv”, which then was transformed into an award presented by the city to 75 individuals and organizations supporting Jewish culture and communities in western Ukraine or working on projects of memory recovery and heritage preservation. Marla’s application to the Fulbright Program followed several coffee-time discussions in Lviv with Rachel and her husband Jack Wright about their own project work. Sofia and Ruth have both been supporters of Rohatyn Jewish Heritage for many years, providing resources and ideas, personally and through their institutions, to help advance the practical and intangible aspects of our work.

The Center for Urban History of East Central Europe will also serve as Marla’s host institution, thanks to an invitation offered by their deputy director and head of public history projects, Dr. Iryna Matsevko. The Center will play a critical role in the project process, in identifying and connecting people and resources for both inputs to and outputs from the project, and as a venue for workshops and other project events. Marla will depend heavily on the Center’s expertise to help her maximize the content and communication of her research and development work. 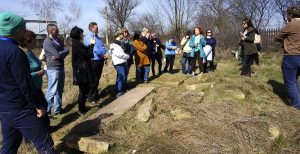 Marla will be working full-time on her Fulbright project as it proceeds through its ten months, but our other tasks for Rohatyn Jewish Heritage will continue as well in order to make progress in other areas. We anticipate sharing information freely between her Fulbright work, our other RJH projects, and related heritage projects conducted by our friends and colleagues in the region, as well as on social media, throughout the academic year. It will certainly be an exciting time!