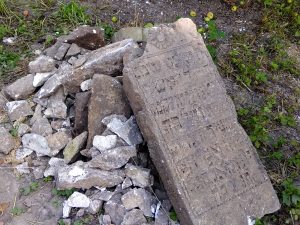 The collected stones near the barn before moving.
Photo © Vasyl Yuzyshyn.

Our Lviv-based friends Vasyl Yuzyshyn and Sasha Nazar of the Lviv Volunteer Center of the All-Ukrainian Jewish Charitable Foundation “Hesed-Arieh” were in Rohatyn again yesterday, helping us by cutting and clearing wild vegetation at the old Jewish cemetery.

While they were working, a neighbor came over to alert them to Jewish headstone fragments she had uncovered during recent home improvements. The stones had been buried years ago to strengthen a path between her residence and the barn. The concerned homeowner had first consulted a local priest about what to do. Thanks to our long-standing good relations with the Church, the priest advised her that the stones were from the Jewish cemetery, and should be returned there. On her own initiative, the woman had already arranged for two friends and a horse-drawn cart to help her, and had already loaded some of the stones into the cart. When she heard the motor tools running in the Jewish cemetery, she approached Vasyl and Sasha to confirm the priest’s advice. They agreed, and then joined the women to help load the heaviest stones into the cart.

Gathering the stones for transport on the cart. Photos © Vasyl Yuzyshyn.

The headstone fragments were carefully unloaded and are now safely at the old Jewish cemetery with hundreds of other recovered stones. Our website’s interactive map has been updated to reflect the location of their discovery. This marked the third headstone recovery in Rohatyn during 2020, and now we have another friendly neighbor who is aware of our work.

Sasha and Vasyl back at work after the excitement.
Photos © Vasyl Yuzyshyn.

Yesterday also marked Vasyl’s eleventh trip to Rohatyn to clear vegetation in the Jewish cemeteries, and Sasha’s third, helping keep the sites in good condition while we and other foreign volunteers cannot be in Ukraine during the COVID-19 pandemic. Together with the Vasylyk family, their regular working visits (despite an unusual weather season) have been filling in for the larger volunteer working events we have organized at the cemeteries in past years. It has been tough for them, but it has been a great help – and there is more to do in the cemeteries this year, if it remains safe to work there!