For the second time so far in 2021, Rohatyn Jewish Heritage team member Vasyl Yuzyshyn was alerted to Jewish headstone fragments discovered outside the Jewish cemetery. 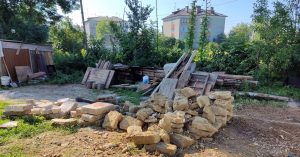 Jewish headstone fragments mixed with other building rubble at the site. Photo © RJH.

This week a local homeowner, Zinoviy Pavlyuk, reported the fragments to the Opillya local history museum in Rohatyn. Mr. Pavlyuk’s family bought a home on vul. Drahomanova (also called vul. Kudryka) a few years ago, and had started to sift and remove a mound of construction debris on the property in order to build a new garage, when he encountered a number of large and small Jewish headstone fragments. Although a surprise for Mr. Pavlyuk, the riverside street is well known in Rohatyn as a place where headstones are discovered whenever the pavement is excavated for building work; 50 fragments and one intact headstone were unearthed there and at another site in 2016, and another 25 large fragments were discovered in 2017 when a neighboring homeowner trenched next to the street for a fence foundation. The museum’s director, Olha Blaha, contacted us via Facebook and telephoned Vasyl, who already planned to be in Rohatyn today doing vegetation clearing work again at the old Jewish cemetery. Together Olha and Vasyl arranged with the homeowner for the safe recovery of the more than two dozen headstone fragments, which brings the total recovered on this one street alone to more than a hundred. 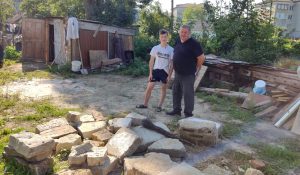 Mr. Pavlyuk, who reported the found headstone fragments, with his son at the site. Photo © RJH.

With some help from Mr. Pavlyuk and two neighbors, Vasyl loaded the Jewish headstone fragments in his van and then transported them today to Rohatyn’s old Jewish cemetery, where they join the hundreds of others returned there over the past decade. It took Vasyl two trips with his large van to gather and transport all the fragments. This discovery and recovery were newsworthy not only to Rohatyn Jewish Heritage and the local community; the regional internet news agency Versii.if.ua picked up my social media posts and posted a news article on their website for the interest of others in the Ivano-Frankivsk region.

This event follows a smaller one in June of this year, when two Ukrainian tourists visiting Rohatyn spotted Vasyl working in the old cemetery and told him about a small Jewish headstone fragment they had seen while walking in the surrounding neighborhood. Vasyl followed them to the site, recovered the fragment, and brought it back with him to the cemetery.

The headstones transported by Vasyl to the old Jewish cemetery in Rohatyn today for preservation.
Photos © RJH.

Our interactive map of headstones recovered to date (below) has been updated to include today’s fragments. This is the eleventh consecutive year of our Jewish headstone recovery work in Rohatyn, made possible by our friends and volunteers, the Rohatyn city administration, local religious and community leaders, and especially (as this week) by many individual concerned citizens of Rohatyn. We are grateful for the broad support in the city for the recovery and preservation of our shared heritage.