With the arrival of autumn and the cool, wet weather it brings to western Ukraine, this week Rohatyn Jewish Heritage team member Vasyl Yuzyshyn made what is likely his final working visit to Rohatyn’s Jewish cemeteries for the year. Since May, Vasyl has cleared vegetation for us at the two sites nearly two dozen days, usually alone but sometimes joined by friends and activists from Lviv, Rohatyn, and Ivano-Frankivsk. 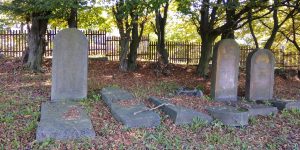 While in Rohatyn during this visit, Vasyl did a walk-through of both old and new cemeteries, picking up and removing some empty bottles and other foreign objects, and he confirmed that both cemeteries continue to make a neat and tidy appearance street-side. This is very important to us and to the cemetery neighbors who are our eyes and ears when we and our volunteers are not there.

Vasyl also checked on the two Holocaust mass graves, north and south of city center, reporting that both looked unchanged since his last visit to Rohatyn in September.

Views of the new Jewish cemetery in Rohatyn this week. Photos © Vasyl Yuzyshyn.

A panorama of the east entrance to the old Jewish cemetery. Image © RJH.

In addition to reporting to us what he saw and did at the cemeteries and mass graves, Vasyl also made dozens of photographs to document his work and the condition of all four sites. A few of his photos are included here.

Since leaving Ukraine “temporarily” in late March because of the pandemic, Jay and I have relied on Vasyl, not only in caring for the cemeteries, but also maintaining and storing our collection of motor and hand tools, meeting with Rohatyn residents such as Ihor Vasyliovych Zalypko (the local volunteer we hired to plant seasonal flowers at the two Jewish mass graves and keep them clear), and coordinating the recovery and transportation of displaced Jewish headstones uncovered outside the cemeteries by residents. 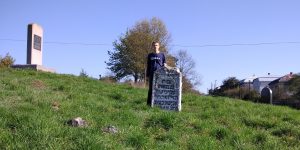 Vasyl with the oldest headstone in the old Jewish cemetery. Photo © RJH.

It should be obvious that Vasyl has been indispensable to us (and to all Jewish descendants who care about the heritage) during this period of the pandemic, and we cannot adequately express our deep gratitude to him for his devotion and hard work helping us over these past several months. We are also grateful to friends from Rohatyn, Lviv, and Ivano-Frankivsk who took time out of their busy summer schedules to support Vasyl’s work at the Jewish cemeteries, including Sasha Nazar of the Lviv Volunteer Center and the Vasylyk family of Ivano-Frankivsk. Thanks to their volunteer efforts, the Jewish cemeteries of Rohatyn retained their cared-for appearance despite rapid growth of grasses and wild shrubs and trees.

Going forward, Vasyl has agreed to continue making visits roughly once per month to check on all four Jewish heritage sites in Rohatyn, provided the roads remain clear of winter snow and ice. His regular visits not only ensure that we always have a recent remote view of the condition of the cemeteries and mass graves but also provide early notice of any problems or issues which may need addressing or correcting. For our project, this monitoring is a kind of insurance to protect the past efforts of our many dozens of volunteers and our project’s investment in preserving the Jewish heritage of Rohatyn.

A few views of the old Jewish cemetery in Rohatyn during this visit. Photos © Vasyl Yuzyshyn.