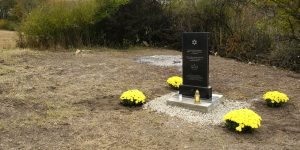 Thanks to the Rosolovska family of the village of Chesnyky (Чесники) near Rohatyn, Chesnyky’s prewar Jewish families were honored through the unveiling of a monument to their memory on October 18, next to the common grave where almost a dozen Jews of Chesnyky were laid to rest by Chesnyky villagers after they were executed nearby by the Nazis in 1943. 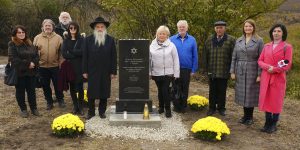 The Rosolovska family at right with heritage activists, the Rabbi, a local witness, and the TV interviewer after the ceremony. Photo © RJH.

Information about the execution and burial was gathered through research and local testimonial interviews by Mykhailo, Galyna, and Roksolana Rosolovska (father, mother, and daughter) who can often be found guiding tours and organizing clean-ups at Chesnyky’s historic church of St. Michael, an important architectural gem of Ukrainian heritage. Earlier this year, Roksolana wrote us about the mass grave site, located not far from the Rosolovska home in Chesnyky, and her plans to install a memorial nearby. Jay and I were very happy to be back in Ukraine by the time the memorial was completed, and more than pleased to attend the unveiling. The ceremony was led by Rabbi Kolesnik of the Jewish community of Ivano-Frankivsk and was witnessed by a handful of Chesnyky residents, journalists from Ivano-Frankivsk, and friends from nearby Burshtyn.

According to Roksolana, there were more than two dozen Jewish families living in Chesnyky in 1935, among them the Karten family of Chesnyky and Rohatyn, as well as the Axelrod family. Boris Axelrod (later Arsen) survived the war thanks to the righteous deeds of a Chesnyky school friend named Bohdan Hryvnak: Bohdan gave his baptism certificate and other identity papers to Boris who was interned at the time with his family in the Rohatyn ghetto – the papers allowed Boris to escape with his life. After the liquidation of the ghetto, the Hryvnak home in Chesnyky was searched by the Germans and in December 1943 Bohdan was shot to death. Jay and I visited the Chesnyky gravesite of Bohdan Hryvnak prior to the monument unveiling. 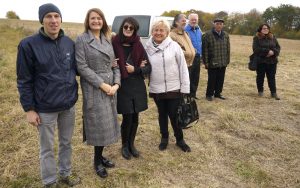 RJH team member Vasyl Yuzyshyn at left with Roksolana, me,
Galyna, and others at the site. Photo © RJH.

Chesnyky and its surrounding forests appear in a number of Jewish memoirs of the war years, including the 2005 book “My Bitter Truth” by Boris. Info about righteous individuals and memoirs pertinent to Chesnyky, Rohatyn, and other villages in the region can be found here on the Rohatyn Jewish Heritage website (links below).

Roskolana’s research also indicated that there was a brewery in prewar Chesnyky that was owned by Jews (she showed us the space but today there only remains a spring), and that there was a well-known Jewish midwife named Esther who assisted births not only in Chesnyky but also in many surrounding villages. It is likely that this midwife was Esther Bernstein, known to many Rohatyn Jewish families over the decades for having delivered many babies in Rohatyn, including my great-grandfather’s younger sister Bronia Horn, born on February 1, 1904 on vul. Valova in Rohatyn. 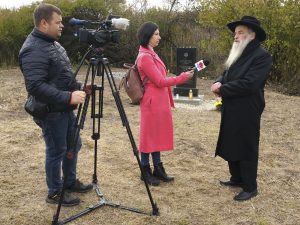 The Rabbi being interviewed for local TV news. Photo © RJH.

Realization of the new memorial was made possible with the support of the United Jewish Community of Ukraine (which has sponsored many such memorials across Ukraine during the past year and more) and the Jewish community of Ivano-Frankivsk.

Following the unveiling, a number of those who attended the ceremony were interviewed by Віталіна Запорожець for ТРК “РАІ” including Roksolana, the rabbi, a local villager named Mykhailo Slobodian with knowledge of the killings and burial, and me. 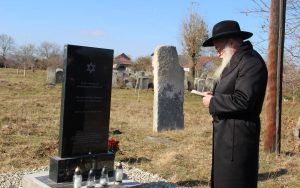 One of those who attended the Chesnyky memorial event was Burshtyn resident, author, heritage activist, and friend Ivan Yurchenko. Ivan has researched, documented, and published books on Jewish cemeteries in both Burshtyn and Halych, and was honored for his work in recovering Jewish memory in the region in fall 2018 by the city of Lviv. A week after the Chesnyky event, Ivan hosted his own memorial unveiling in Burshtyn at the Jewish cemetery, a ceremony which was also led by Rabbi Kolesnik and underwritten by the United Jewish Community of Ukraine. 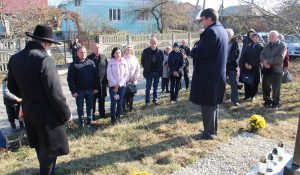 Visitors to the Burshtyn event listen to one of the speakers.
Photo © Василь Хованець.

In October 1942, following the Nazi extermination of Rohatyn’s Jewish community, the Jews of Burshtyn were transferred to the Rohatyn ghetto joining other Jewish families from the region including those who had lived in Bilshivtsi, Bukachivtsi, and Chesnyky. All were executed by early June 1943 when the ghetto was finally liquidated; their bodies were buried in a common grave at the “vodokanal” north of the Rohatyn city center.