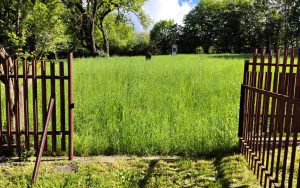 The new cemetery before clearing started this month. Photo © RJH.

In April and May, Rohatyn experienced a series of alternating days of wet and sunny weather, typical for the season, causing an explosion of new grasses and shrubs to come up at the old and new Jewish cemeteries. By mid-May, both cemeteries were ready for their first clearings of 2021 and thankfully, Rohatyn Jewish Heritage team member (and four-year volunteer) Vasyl was ready to help out again. 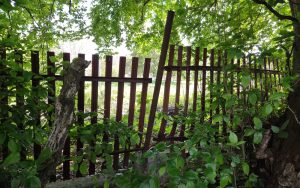 Some of the fence issues we’ll defer repair work on until later this year. Photo © RJH.

Over one and a half days, Vasyl completed a first-pass clearing of the new Jewish cemetery. The weather was good and he reported no issues with the work or the site other than noticing on a perimeter walk-around that a few joints in the steel fence are now cracked or broken, and some stamped pickets are bent or needing replacement. Jay and I believe we can postpone work on this small project until we are back home in Ukraine, hopefully by fall. The fast-growing poisonous plant called Sosnowsky’s hogweed has of course also returned, so Vasyl has already begun cutting the plants according to European-recommended methods to (hopefully) keep it in check. 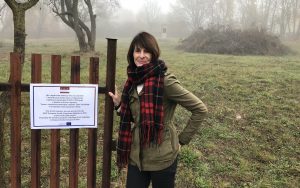 After the first clearing day, Vasyl arranged to get into our Lviv apartment to pick up additional motor and hand tools, gloves, motor oil, trimmer string, and related supplies for this year’s work. While there, he also found a duplicate sign from ESJF’s 2019 survey of Rohatyn’s Jewish cemeteries, which we had printed, laminated, and affixed to both cemetery fences back in October 2019. During Vasyl’s visit to Rohatyn in April, he noticed that the sign at the new Jewish cemetery was no longer attached and intact; it had ripped from the fence during early spring wind storms. When he went back in mid-May to work at the cemetery, he installed the duplicate sign from our apartment. 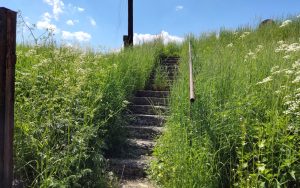 Once clearing was completed at the new Jewish cemetery, Vasyl packed up tools and supplies and drove to the old Jewish cemetery: there he got in a couple of hours of cutting work, beginning as usual around the cemetery stairs so the site continues to look cared-for from the road at the main entrance and as seen by residences across the street. While working, Vasyl noticed a man with a scythe at the lower end of the cemetery, so he walked down and learned that the man was mowing and removing the cut grass to take home to feed his goat, a task that benefits our work and his needs; Vasyl thanked him for us. 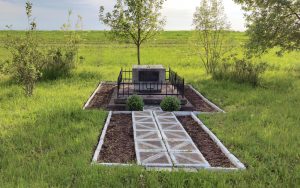 While he was in Rohatyn last week, Vasyl also met with our local caretaker of the wartime Jewish mass graves, Ihor Zalypko, and paid him the second installment of compensation for this year for keeping the grave sites clear of weeds, planting seasonal flowers, and doing light repairs to the memorial monuments – important and meaningful efforts that for decades and until a few years ago were undertaken by the late Mykhailo Vorobets. 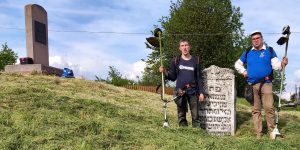 Vasyl and Sasha at the top of the old Jewish cemetery in Rohatyn yesterday. Photo © RJH.

Yesterday, Vasyl returned to the old Jewish cemetery to work and was joined by Sasha Nazar, heritage activist and head of the Lviv Volunteer Center, the Ukrainian Jewish civil society arm of Hesed-Arieh in Lviv. For several years now, Sasha has been a key contributor to our work in Rohatyn, assisting in recovering Jewish headstones and clearing at both Jewish cemeteries. In return, we have assisted Sasha and the LVC on numerous occasions working at Jewish synagogues, cemeteries, and mass graves, heritage commemoration events, and headstone recovery projects in the Lviv oblast. Sasha is one of our dearest friends and most important partners in Lviv, and a powerful advocate for Jewish heritage and preservation in Lviv and the region. He and his volunteers are slowly but steadily restoring the Jakob Glanzer synagogue, one of only two surviving prewar Jewish houses of worship in Lviv. Together, Vasyl and Sasha worked a full day at the old cemetery and made a lot of progress.

Vasyl will need to return to Rohatyn several more times in the next few weeks as weather permits to complete the first round of clearing at the old Jewish cemetery. The old cemetery site is larger than a European football pitch and double the size of an American football field, and considerably larger than the new cemetery. We are hopeful that a few other Ukrainian friends in the region who joined him last year here will also reach out to help out again this season.

A panorama of the new Jewish cemetery in Rohatyn after completion of the first clearing for 2021.
Photo © RJH.

A panorama of the old Jewish cemetery in Rohatyn showing clearing progress to date. Photo © RJH. 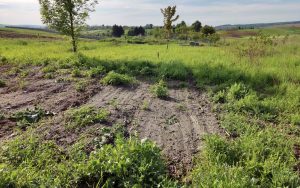 Soil added and compacted onto the south mass grave site by the City of Rohatyn. Photo © RJH.

Jay and I are so very grateful to Vasyl, Sasha, Ihor, and others who continue to help us care for the four historic Jewish heritage burial sites in Rohatyn, especially during the pandemic when we cannot be there ourselves. We owe a debt of thanks as well to our Lviv lawyer and RJH board member Wito Nadaszkiewicz and to the City of Rohatyn and its deputy Mayor Mykola Shynkar for recently arranging to add soil to the surface of the south mass grave and compact the soil to cover past episodes of illicit digging for wartime relics at the site. We also wish to thank everyone who donated to Rohatyn Jewish Heritage in 2020 and 2021 to help us cover the costs associated with these responsibilities, including travel to and labor at the cemeteries, new and ongoing supplies, and maintaining our tools. If you would like to support our work, please visit the Rohatyn Jewish Heritage website where donations can be made by check, credit card, or PayPal, and are tax-deductible for Americans thanks to the generosity of our partner, Gesher Galicia, a US-registered 501(c)(3).