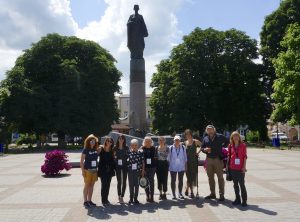 The group together at Rohatyn’s central square. Photo © 2019 RJH.

Yesterday, Jay and I joined a tour group organized by the Galicia Jewish Museum in Kraków, who are participating in a study program over 3+ days of Jewish heritage sites in eastern Galicia. In addition to the tour leaders and us, there are six women in the group, hailing from South Africa, the United Kingdom, and the U.S. To our great pleasure, four of the six are members of the same extended family with Rohatyn Jewish roots, who had joined the Museum tour when they heard Rohatyn was on the itinerary; we were very happy to share what we know about Rohatyn’s history and its surviving Jewish heritage, and to discuss our long-running project of heritage recovery, preservation, and promotion. The group was rounded out by two women who are professors of philosophy and history, which added interesting perspectives for us and for the other tour participants.

The tour, called “An Unfinished Memory”, is being led by our friend and colleague Jason Francisco, an artist and essayist who has been active for many years researching and documenting the Jewish experience in eastern Europe, and by our good friend Agata Radkowska-Parka, a very seasoned tour organizer for Rootka Tours in Lublin, Poland, and an activist in several current Polish/Jewish cultural organizations. Two years ago, we joined Agata when she led a group of Holocaust educators and professional tour guides, mostly from Poland, through the Jewish heritage sites of Rohatyn. Jason and Agata were also supported informally by our friend the London-based visual artist Asya Gefter, as an additional guide and photographer; as always, Asya engaged with local people we met along the way to ask questions and to explain about the group’s purpose in the towns we visited. Yesterday was the first full day the group spent together; today they are visiting sites in Lviv, and tomorrow they will visit several towns outside of Lviv to the north, including Zhovkva and Rava Ruska.

Jason leading the group at the ruined synagogue and the erased Jewish cemetery in Bibrka. Photos © 2019 RJH.

About halfway en route from Lviv to Rohatyn yesterday morning, we stopped in Bibrka, where Jason discussed the history of the town and its Jewish community. This was an opportunity for Jason to begin focusing the group’s attention to the absences and shadows of past Jewish life which persist in the midst of modern life throughout the region. All that physically remains today of the once substantial Jewish community of Bibrka is a crumbling synagogue ruin and a devastated Jewish cemetery – unmarked, unfenced, and devoid of its headstones. These relics serve as sad reminders of the abrupt end of Jewish life here; vulnerable sites such as these, where today there is no Jewish presence and little heritage tourism, can disintegrate from neglect and leave behind almost no memory of the communities which once created and nourished them.

Discussions at the Jewish cemetery and reconstructed ohel in Novi Strilyshcha. Photos © 2019 RJH.

After Bibrka, we headed further south to the border between the Lviv and Ivano-Frankivsk oblasts, where we visited the Jewish cemetery of Novi Strilyshcha. The site is signaled by a tall ohel erected some years ago through the research and engineering of Lviv-based friend and heritage activist Meylakh Sheykhet. Our group was greeted at the cemetery by a Ukrainian neighbor who tends to the site and holds the key to the ohel. While inside the ohel, Jason discussed Meylakh’s work here and elsewhere in the region, and the role the site plays today as a destination for Jewish religious pilgrims. Since the site’s recovery and the erection of the ohel, a handful of Jewish headstones have been anonymously returned to the cemetery, barely visible this time of year in the tall grass but an important sign of the recovery of memory. Here, Jason asked the group to consider how sites were chosen for cemeteries by Jewish communities in the past, and we all paused to listen to the quiet that the serene location still provides. It was also an opportunity to contemplate how sometimes just one motivated person can stop and even reverse the loss of local history.

Posing at a former family home in Rohatyn, and meeting a new resident there. Photos © 2019 RJH.

After lunch just outside of Rohatyn in the nearby village of Potik, Jay and I began the tour of Rohatyn at the central Roksolana Square, with a discussion of the town’s multicultural past and the role that the Jewish community played in that history. We reviewed the centuries-old churches and synagogues which mark the religious life of Rohatyn, and described the pre-war Jewish shops and businesses which ringed the square. Then we walked together up vul. Ivan Franko to see a house which was once the residence of the Aufrichtig family of Rohatyn and nearby Dolyniany – ancestors of the four related women in the tour group. Turning the corner, we walked along vul. Valova, where the Great Synagogue and three other synagogues once stood, and where a beit midrash and another former Jewish community building still stand in partial ruin. The homes and religious buildings in this part of town naturally led to a discussion about the life cycle of Jews in Rohatyn, as an example of the common experience of regional Jewish life in the past, and heritage challenges in the present. 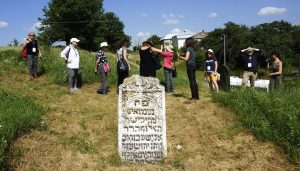 At the top of the old Jewish cemetery in Rohatyn. Photo © 2019 RJH.

From the center of town we drove the short distance to the old Jewish cemetery, where Jason highlighted how the site was once at the very edge of Rohatyn but today has been encircled by many homes plus the commercial sites of the railway station, grain silos, and other light industry. At the top of the cemetery, we reviewed some of the few fixed Jewish headstones (including the oldest known example in the cemetery) and I explained about the recently-reconstructed ohel over the graves of well-known tzadiks. Then the group walked down a path Jay and Vasyl had recently mowed through the tall grass along the hundreds of gathered headstone fragments, to kick off a discussion about the Rohatyn Jewish Heritage projects of Jewish headstone recovery and cemetery rehabilitation. We spoke about the importance of engaged Shoah survivors in marking and speaking about these sites over the past decades, and also about the essential role of neighbors and vigorous local activists such as Mykhailo Vorobets in caring for the sites, researching records, interviewing witnesses, and publishing their findings in local periodicals to keep the history alive for the current population.

A discussion about RJH projects, progress, challenges, supporters, and the future. Photos © 2019 RJH. 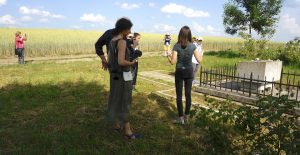 That discussion led us to our last site of the day, the south mass grave dating from the March 1942 aktion, where most of Rohatyn’s Jewish citizens were murdered and buried. Here, Jay and I described the Shoah timeline in Rohatyn and its impact on Rohatyn, plus the effects of post-war Soviet rule, which together led to the very decayed state of Jewish material heritage in town today. But here and throughout the visit to Rohatyn, we also discussed more positive signs which help to make Rohatyn a useful example of possibilities, from the memorial monuments erected in the 1990s, to the multicultural presentations in the town’s local history museum, to cooperation with the city administration and with local citizens, and to the gradual progress of our heritage projects around town.

It was our great pleasure to spend the day with the Galicia Jewish Museum’s study group, and with leaders Jason, Agata, and Asya, and we hope we gave the group – particularly the Rohatyn Jewish descendants – a feel for the long, rich, and complex Jewish history of Rohatyn as well as the challenges Rohatyn Jewish Heritage faces in our ongoing efforts to maintain the local heritage sites and reintegrate Jewish memory into the modern Ukrainian city. We very much appreciate the thoughtfulness and interest of all of the participants in regional heritage concerns, despite the significant heat during the long day; we wish them well on the remainder of their study tour.

Rohatyn Jewish Heritage has been and continues to be a proud supporter of the Galicia Jewish Museum, and we look forward to further collaborative heritage projects in the future.