The logo of the Connecting Memory program in Ukrainian, German, and English.

Marla and I would like to inform you about the beginnings of a new project which we hope will ultimately provide enhanced, sustainable protection and commemoration of the Jewish mass graves in Rohatyn, and also help to develop and distribute Holocaust-related educational materials for teachers and students in Rohatyn and Ukraine. This is a formal three-year collaborative project involving dozens of towns and villages across Ukraine. We applied to the program in July of last year, were accepted and have been working on the project since early 2021, and we hope to continue to the planned program completion in 2023. 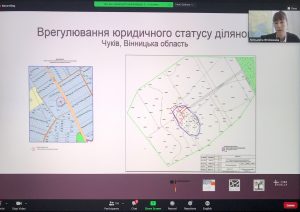 Example legal land documentation from a project in the previous phase, as part of an early information exchange in the current phase.

The “Connecting Memory” program, like its predecessor called “Protecting Memory”, is run by the Foundation Memorial to the Murdered Jews of Europe in partnership with the Ukrainian Center for Holocaust Studies (UCHS) in Kyiv. It is funded by the German Federal Foreign Office; the law establishing the Foundation requires it to contribute to “ensuring that all victims of National Socialism are remembered and honored appropriately”. Now in its third phase, the program has been running in Ukraine for more than 10 years already. In the pilot phase, five mass grave sites were researched and protected by 2015; in the next phase, an additional 15 sites were partially or fully protected by 2019, commemorative events and exhibitions were held, and best practices for research and architecture were outlined.

Marla with supporters and a witness to accidental excavation of a part of the north mass grave in Rohatyn, during an RJH interview in early 2018. Photo © RJH. 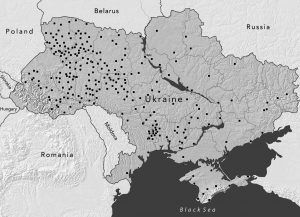 A geographic summary of known sites in Ukraine where more than 500 Jews were killed in en masse the “Holocaust by bullets”.
From the Protecting Memory 2019 report; data by Andrej Umansky and Alexander Kruglow, map by mr-kartographie, Gotha.

The program activities build on earlier research and documentation efforts of sites of mass killing and burial of Jews in central Europe by the French NGO Yahad – In Unum, led by the Catholic priest Father Patrick Desbois (and an official partner of Rohatyn Jewish Heritage), with initial support from the American Jewish Committee (AJC). Based on Yahad research, even in its expanded current phase the scope of the program can address only a small fraction of the estimated 2000 mass shooting sites within the boundaries of modern Ukraine, including at least 300 sites where 500 or more Jews were shot and buried. Rohatyn’s two mass graves, the killing and burial places of more than 3000 Jews each, are typical relics of the wartime destruction of Jewish communities in the region.

Within the program administration, a small core staff of experienced researchers (most of whom led or contributed to the prior project phases) is supplemented for the current phase by specialists in a variety of fields, especially in educational curriculum development and practice, mentorship, and teacher training (via Insha Osvita, a Ukrainian NGO, and the UCHS); historical research, with a focus on the Holocaust (via the UCHS); and Ukrainian law, particularly on registration and protection of heritage sites. 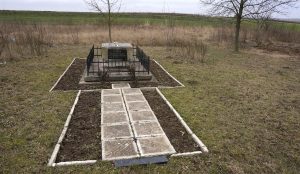 The Connecting Memory project team for Rohatyn includes Marla and me plus our NGO attorney Wito Nadaszkiewicz of Lviv, who submitted the project applications from materials Marla and I assembled with Ukrainian translations provided by our long-time supporter Nataliya Kurishko. Our team colleagues in Rohatyn, who provided support letters to the application, are Mykola Shynkar (Deputy Mayor of Rohatyn), Olha Blaha (Director of the Rohatyn Opillya Regional History Museum), and Yarema Zvarchuk (deputy director of the main Rohatyn high school); support for our application was also provided by Rabbi Kolesnyk, the Jewish community leader of Ivano-Frankivsk and the surrounding region. We have our dear friend Christian Herrmann to thank for alerting us to this project opportunity, as the original call for applications was made only in Ukrainian and German languages, which we had not seen. 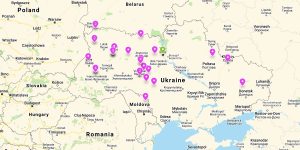 In addition to Rohatyn, other new projects in western Ukraine in the current program phase include Dolyna in our own Ivano-Frankivsk oblast, Zhovkva and Maheriv in the Lviv oblast, and a bit further away, Kyseliv in Chernivtsi oblast and Yasinia in Transcarpathia. Returning project teams (who may also act as mentors to new participants) include Rava-Ruska in Lviv oblast, Kysylyn in Volyn oblast, Mizoch and Ostrozhets in Rivne oblast, and Raihorod and Samhorodok in Vinnytsia oblast. It is expected that some participants will drop out due to conflicting time constraints; teachers and civic administrations especially have ongoing strong demands on their time, and the strain is already apparent in the dwindling engagement in the initial project deliverables and video meetings (this program is entirely unpaid/volunteer for all participants). 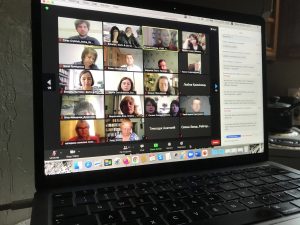 Participating in a training session via Zoom from our temporary housing in California.

In spring and summer of 2021 the project activities have so far focused on introducing the coordination team and the individual participants to each other via brief personal profiles, site and project presentations, a private Facebook group for information exchanges and Q&A, an interactive map of project team locations, and a series of weekly online (Zoom) video meetings with all teams to share information and highlight concerns; so far, the ongoing Covid-19 pandemic has limited opportunities for teams to meet in person. In June and July, team assignments have included detailed questionnaires about historical research and about mass grave site characterization (geographical and legal). The Rohatyn team has a significant head start in these two project tasks; during the past decade our ongoing heritage project Rohatyn Jewish Heritage (RJH) has already researched and published much of the background history and site data from many sources including our Rohatyn Jewish community history with detail on the Shoah in Rohatyn, but also collective memory books and personal memoirs, academic research compilations and a German wartime military report, and the wartime witness testimony of Jewish survivors and first-hand witnesses among the ethnic Ukrainian community to the Rohatyn ghetto and killing sites, including some who have recently passed. 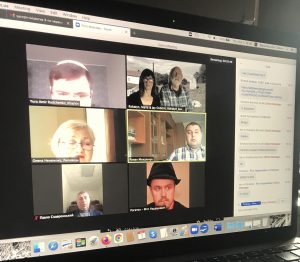 RJH team member Wito with Marla and me in a cross-team exchange about resources available and needed.

The program coordinators expect all project participants to engage not only with the leadership team but also with each other, especially regionally and where projects may be able to partner for sharing applicable skills, knowledge, and other resources. One element of the larger project in which RJH can especially contribute by example and guidance for other projects is the communication and promotion of local Jewish heritage and history via online tools including websites and social media, as outlined on the website we developed for Marla’s recent Fulbright research project.

The full Connecting Memory program plan and schedule for 2021-2023 has not yet been outlined, though we know that the next months will engage trained mentors for local educators and museums plus some other specialist functions. If the pandemic in Ukraine lessens sufficiently to permit safe travel and face-to-face meetings, some teams will likely visit other project sites and begin discussions on collaboration opportunities. After we are back in Ukraine and have restarted our regular burial site work in Rohatyn in September, we hope to begin several such meetings in western Ukraine as representatives for our Rohatyn project. 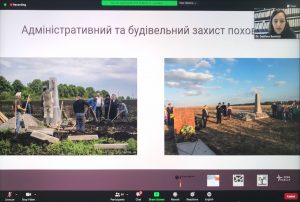 An example mass grave construction project for protection and commemoration during a previous phase of the program.

The Connecting Memory program coordinators are careful to emphasize that in this phase there will not be sufficient funding to cover the costs of technical surveys of mass grave boundaries or the installation of protective and commemorative features at each of the mass grave sites, though we hope the program can somehow help us partially offset the significant costs of such work in Rohatyn. We also hope our team can secure support in other forms including: proven strategies for registering mass grave sites into regional and national government databases; recommended texts and curriculum/strategy guidance for teaching the Holocaust in Rohatyn and other area high schools; expert design guidance on effective and affordable site protection; and translation of a key Rohatyn ghetto survivor memoir plus transcriptions/translations of two witness testimonial videos.

Marla and I will report from time to time here about our team’s Connecting Memory project activities and any substantial developments which benefit our overall heritage and education project goals. Please contact us if you have questions or suggestions for us and/or other Rohatyn project team members throughout the project term.